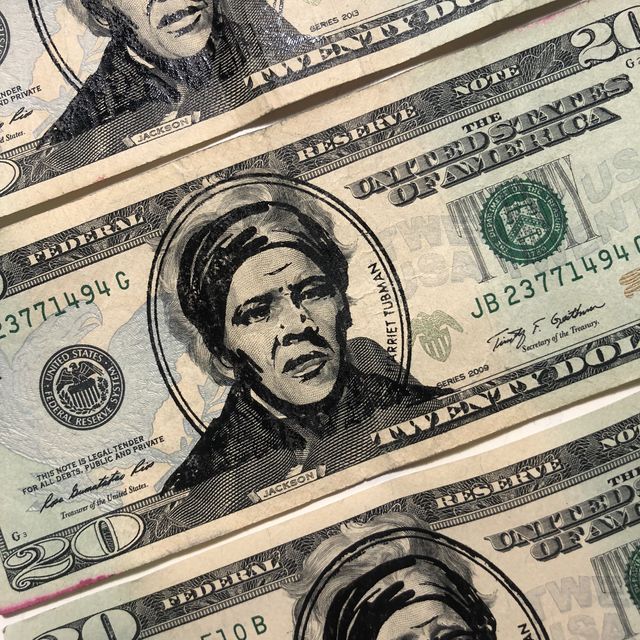 In 2019, we got our first look at Harriet Tubman on the $20 bill. Though many were overjoyed at the prospect of removing Andrew Jackson — another white, misogynistic man who supported slavery and forced 15,000 Cherokee people from their land — from the $20 bill, we were less overjoyed by the delay until 2026. Luckily, Brooklyn has Dena Cooper, a freelance illustrator in Bay Ridge who’s been taking matters into her own hands and stamping hundreds of $20 bills with Harriet Tubman’s face. BUST caught up with Cooper over email to discuss her vision for the stamp, Tubman's legacy, and the ways you can get involved, too.

In your own words, why should we fight for Harriet Tubman on $20 bills?

Harriet Tubman was to replace Andrew Jackson on the $20 bill in 2020 to celebrate the 100 year anniversary of the 19th amendment, allowing women to vote. The initiative was tabled by the Trump administration until 2026, insuring he would be out of office when the issue resurfaced. Andrew Jackson has been an unsavory character in American history, to say the least, uprooting thousands of Native Americans from their ancestral homelands, many of whom died upon removal due to starvation and disease. In comparison, Tubman was an advocate for the disenfranchised, helping over 300 people escape slavery and start new lives in places like Philadelphia and Canada. She was also a spy and armed scout for the Union Army during the Civil War, and a fervent advocate for the Women’s Suffrage Movement around the turn of the century.

The contrast in legacy left by these two notorious American figures could not be more fundamentally different. Andrew Jackson in many ways exemplifies the prominent white Patriarchal hand that has guided America, and in many ways the world as a whole, to these divided, divisive cross-roads in which we find women and minorities fighting to be represented and heard. Tubman, on the other hand, is a beacon of inclusivity and justice for all, an American icon deserving her portrait enshrined on our currency.

It feels right to advocate for a woman that has advocated for so many. In a way, fighting for Harriet Tubman’s rightful place on the $20 bill is symbolic of the current struggle minority women face when not taken seriously. It’s harder for black women to find jobs, to receive adequate care from their doctors, to buy a home…and the list goes on. Speaking up and standing by my minority sisters is the absolute least I can do to help wage war against the status quo. Harriet Tubman was not only a woman, she was a black woman who made change and used her resourses to help others in similar circumstances.

When a government fails its people, civil disobedience is a necessary evil. I aim to create awareness about this issue and many more by using my artwork as a catalyst to share information and ideas. Stamping $20 bills with a hand-drawn portrait of Harriet Tubman has created a lot of interest around the issue. Every time I pay with a stamped $20 bill, the recipient is giddy with questions and support. I am confident that stamping her portrait on our outdated currency will be the impetus needed to garner support for the change and create awareness for the larger issue at hand.

When did you start this?

I started drawing Harriet to be 3-D printed as a stamp last June. It began as a small activism project to contribute to the issue raised by the group, Women On 20s, who led the charge in having Tubman printed on new $20 bills in 2020. When the change was tabled, it spurred a lot of discussion over Instagram, as well as tributes to Harriet Tubman in the form of artistic portraits, and stamps made from her photograph. I wanted to take that idea a bit further with bespoke artwork of her that perfectly fit Andrew Jackson’s features to create a seamless image on the bill.

I’ve noticed some other artists have also been stamping $20 bills with Harriet Tubman stamps. Are you glad that this is sparking a movement in recognizing true heroes in American history?

Absolutely! I am just a small part of this movement to have a woman of color represented on our currency. My end goal is to see it come to fruition, and any person willing to push the idea further, or lend their talents to shine a new light on the matter, has my full support and admiration.

What are your plans for the future with the Harriet Tubman stamps? Where would you like to see it going?

Ultimately, I would like to use this stamp to hold our government accountable. The Trump administration has a bad habit of considering the elite few, and forgetting the many. I’m brainstorming ways to make this a more national initiative that more people can be interactive with. I’m currently in talks with a few organizations to make that happen. The more people who are able to stamp their $20s with Harriet Tubman’s portrait, the more successful this movement will be.

How can we get involved in the project?

There are a few ways to get involved with the initiative. The best and most beneficial way is to purchase the stamp and transform as many $20 bills as possible. Another great way to further awareness is to educate people about the project and about Harriet Tubman’s rightful place on the $20 bill.

Click here to purchase the Harriet Tubman Stamp on Etsy. 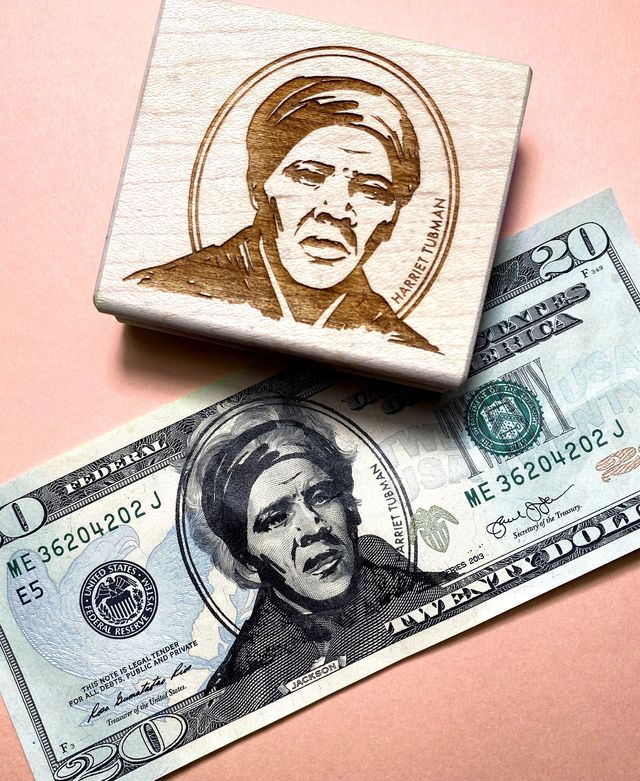 Our First Glimpse Of The Harriet Tubman $20 Bill Is Here