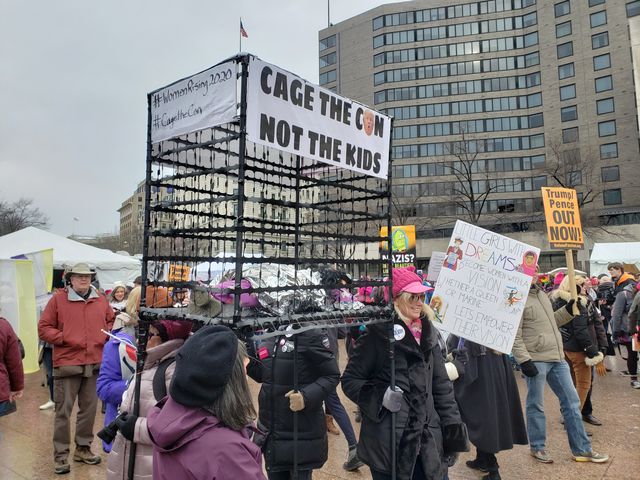 This past Saturday, in Washington, D.C. and other cities across the world, marked the fourth annual Women’s March, which began after Trump was elected as President in 2016. Crowds and coverage of the event were significantly smaller than the previous marches, which could have been because of the snow or, more likely, because of the criticism that the organization has faced with its lack of diversity. Speakers and leaders of the event have notably been mainly cis, white, middle-class women (such as Gloria Steinem, Scarlett Johansson, Ashley Judd, and Nancy Pelosi). Recently, a few of the founding members stepped down from their positions due to accusations of antisemitism.

There was some change in mood, in regards to inclusivity this year, even with the smaller turn-outs. One woman, who was attending her first march, told NPR, “The Women's March has had a history of marginalizing certain people. They want their version of smashing patriarchy to look a certain way. I'm Black, I'm proud. This is my march as much as it is any other person's march.”

Chilean activist group Las Tesis chanted with others among the crowd outside the White House to the now-viral anthem “Un Violador En Tu Camino” (“A Rapist In Your Path”), while some shouted the section of impeachment from constitution due to Trump’s latest unfolding drama.

That said, marginalized women are still not fairly represented in the marches—despite them facing bigger threats than white women. Even scrolling through the top tagged photos, tweets and hashtags it shows that most of the coverage remains unbalanced. For this piece, I searched for photographed disabled women at the marches and found little (in the past, the march has been called out for their lack of accessibility). The three main issues the march focused on this year were: Climate Change, Reproductive Rights and Gun Violence. All of which will heavily affect Indigenous, Black, immigrant, low-income, LGBTQ+, and disabled women the most.

So, to celebrate the march, the diversity in signs and individuals that participated, and the resilience of those that braved the weather, here are some of the best moments in pictures:

When women and femmes come together we are truly capable of anything. Today was so special. We danced, we sang, we marched, we laughed, we learned, we yelled from the top of our lungs in the name of justice for all because we know that we cannot be silent. . . We are humbled and honoured to share this day with every marcher, every volunteer and every staffer who braved the cold and snow. Every protesting veteran, every first-time marcher, every college student, every mother, every one who came out of curiosity, everyone who has simply had enough and everyone in-between. Make no mistake — you did this. Thank you. . . Photos by @kishabari . . #Grateful #WomensMarch2020 #WomensMarch

"If feminism isn't intersectional, it's not feminism."

“If your feminism isn’t intersectional, it’s not feminism. If you don’t fight for ALL women, you fight for no women. None of us are equal until ALL of us are equal.” Well said @theluzcollective! ????⁣⁣ ⁣⁣ I saw a @washingtonpost article⁣ entitled, “Why the Women’s March is Struggling for Relevance,” in which it describes the female-led event as disorganized and not as impactful or significant this time around. But I don’t think that’s necessarily true - we’re still fighting for equality, inclusion, autonomy over our bodies, and an end to a cabinet hell-bent on taking our freedoms away. Thank you to everyone that came out this weekend and to those that continue to fight the good fight! #sisepuede ⁣⁣ ⁣⁣ Thoughts?⁣ ⁣⁣ ⁣⁣ #womensmarch #feminism #intersectionalfeminism #solidarity #femalepower #shesepuede #nomorestolensisters #indigenous #indigenouswomen #indigenouspower #latinx

It’s on us to push back against a culture that excuses toxic behavior in the name of “boys will be boys”. You’re never too young to be a good ally to women and survivors. . Photo: @catiebare . . . Image description: photo of a young boy seated on a bench holding a sign that says boys will be boys, but the word boys is crossed out and replaced with good humans.

Gays Against Trump, Inequality, and Guns!

10 | WOMEN’S MARCH 2020 | THE CROWD ▫️ The strong support from LGBTTQQIAAP community. They are always represented at any political events. ▫️ This is one of my favorite events to cover and I photographed all four marches since president Trump was elected. Although, each year the crowd keeps shrinking and this year it was very short, but it was still amazing to see all these people, especially in the weather like this. ▫️ #WomensMarch2020 #WomensMarch #WomensMarchNYC #WomensMarchNYC2020

Marching For All The Black Women

Loving all these signs! ???#WomensMarch. pic.twitter.com/nU6bB7f0AW

Trans Artist Performs Outside of The White House

Marching along to the drumming of LASTESIS, Chilean Feminist Collective, and joining them in performing Un Violador en tu Camino at the White House was a powerful experience and the highlight of my 2020 Women’s March in DC. @lastesis #womensmarch2020 #womenrising2020 #dc #latergram #lastesis #unvioladorentucamino

A Marcher Reminds Us Of The Not-So-Long-Ago Past

Women and girls from different backgrounds, races, nationalities and socioeconomic status face gender discrimination. We all have an opportunity to end the inequalities of the past and present. Join us in making gender equality a reality for all. ? UN Women/Ryan Brown #womensmarch2020 #womensmarch

Bringing To Light The Higher Risks Associated With Minorities

From Texas, With Love

You’re either for us or against us.

"84% of Native women have experienced violence in their lifetime"

Native women are murdered at a rate 10 times higher than other ethnicities. The majority of these murders are committed by non-Native people on Native-owned land. . Moreover, 84% of Native women have experienced violence in their lifetime, and 56% of Native women are survivors of sexual violence, according to the DOJ. 96% of victims of rape or sexual assault are attacked by non-Native assailants. . Today, and all days, we say no more stolen sisters. Justice for missing and murdered Indigenous women and girls. . Photo: @graciella.morales . . . Image description: a photo from the Sacramento Women’s March of Native participants holding a protest sign that says no more stolen sisters. Hashtag M M I W.

While Some Were Bundled Up In The North, In L.A. The Sun And Outfits Were Shining

They Marched AND They Danced

ARNDREA TODAY AT THE WOMEN’S MARCH — “The Beloved Community: a society based on justice, equal opportunity and love of one’s fellow human beings; where black mothers are not afraid for their children and the immigrant mother’s child is sleeping in a crib not a cage.” #womensmarch pic.twitter.com/6WNVbFDevh

A Simple Yet Strong Message

Love is Love (that is true)... The Future is Female (that’s up to you)... Black Lives Matter (I totally agree)... Abolish Ice (to preserve some humanity)... . . ...but when we have to hold up signs to say “science is real”, isn’t that a bridge too far? Shouldn’t that be a given? . . While we still have the 1st Amendment, holding up Repeal and Replace Trump signs in front of one of his properties is still permitted. . . . Women’s March NYC 2020 . . . . . . - #womensmarch2020 #womensmarchnyc2020 #vote2020 #bethechange #womenstreetphotographers #shadowplay #lightandshadow #goandcapturethelight #nikonnofilter #bhportdev #what_i_saw_in_nyc #DevelopPortDev

Sticking To Inclusiveness, Let's Not Forget These Guys

What You Need To Know For The 2020 Women’s March