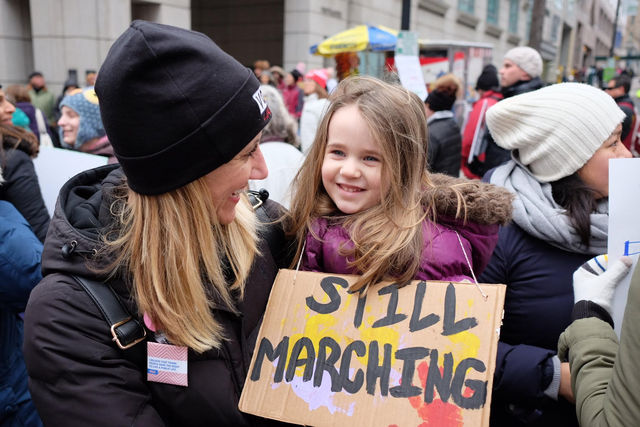 My daughter is three, and this will be her fourth Women's March. In fact, her entire existence knows the third Saturday of January as the day masses of people flood the streets in the name of women and smashing the patriarchy.

Her first Women's March, the inaugural march of 2017 (casually the largest single-day protest in American history), she attended in the form of a battery-operated Medlea breast pump. She made appearances on the floor of many a D.C. restaurant bathroom floor, because, you know, patriarchy. In 2018, she paraded down 5th Avenue in NYC with the sign "I Marched Before I Walked" hung around her neck, and was the recipient of tiny feminist internet fame.

In a country where women make significantly less than our male counterparts, we aren't hired because we might reproduce, we're fired because we tell the truth about workplace sexual harassment, and we aren't believed when we tell the songs we know deep in our souls, it's no wonder she was Queen of 5th Avenue for the day. 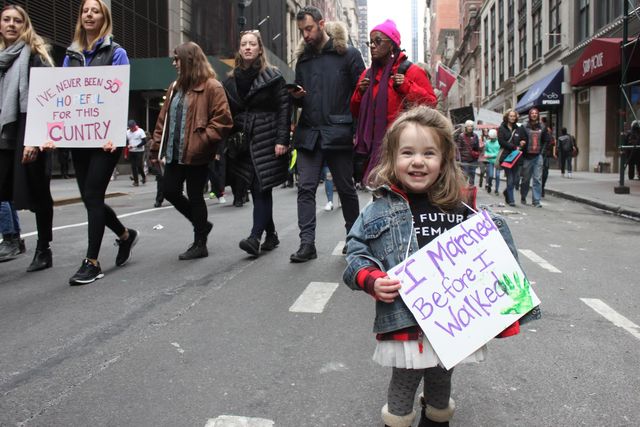 We need signs of hope, and Skyler was June Jordan's saying epitomized: children are the way the world begins again and again. She was a tangible representation of change, of the potential for us to course-correct, to begin again. And the world was here for it.

In 2019 we boarded a greyhound and marched in DC, even though it was a year fraught with internal Women's March division, and the resistance was over-marched and under-satisfied.

We can't show up only when it's popular. Or when it's clean. Movements are always complicated, but we keep moving because the need to rise for women remains. As such, her sign last year read "Still Marching."

As a mother who intentionally involves my children in activism, I often wonder what impact that's having on them. One of my goals is that they understand that activism isn't a one time march you check off, but rather it's a lifestyle of advocating, donating money, showing up, listening, and lifting.

I want them to know that even though 2017 was the first "Women's March," women, especially black women, have been leading marches and protests for centuries. When we march, we do so in the legacy of women who marched first, who marched before they walked in their mamas' wombs, and kept marching through centuries of racism, sexism, and misogyny.

I want them to know that marching for women means marching for immigrants, for trans rights, for economic justice, for prison reform, gun laws, black lives matter, and the climate.

What You Need to Know for the 2020 Women’s March

Amanda Hambrick Ashcraft is an activist, organizer, and mother of five-year-old twins Zane and Levi and three-year-old Skyler.  She is the founder of Raising Imagination, a platform that encourages social change and civic engagement, and the Executive Minister for Justice and Movement Building at Middle Collegiate Church.  You can follow her at @raisingimagination on Instagram.  She and her family live in the East Village of Manhattan and fight the patriarchy together, one cheerio at a time.