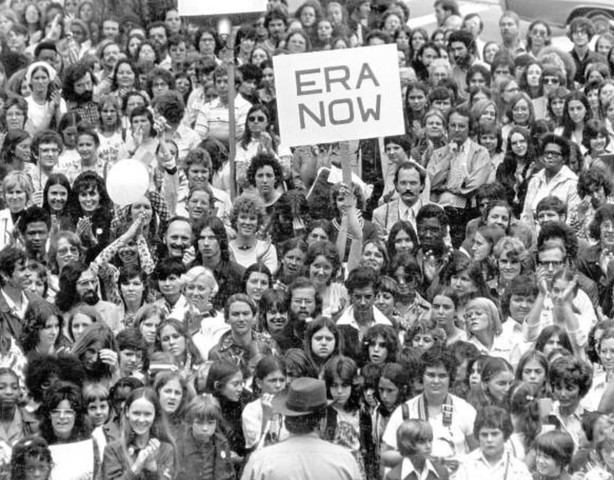 Womxn of the United States of America, rejoice! After an uphill battle that has lasted nearly 100 years, the Equal Rights Amendment just took a major step forward last night when the legislature of Virginia ratified the proposal, making it the 38th and final state needed to do so.

Proposed in 1923 by Alice Paul, the Equal Rights Amendment (ERA) is an amendment to the United States Consitution that ensures “equality of rights under the law shall not be denied or abridged by the United States or by any state on account of sex.”

However, the frustrating reality is that barriers remain before the United States Constitution actually prohibits discrimination on the basis of sex. For decades, the ERA was proposed but never passed until the U.S. Senate and House of Representatives adopted the resolution in 1972 by the required two-thirds margin. The process then turned to the states, since amending the constitution requires that three-quarters of them ratify the amendment. Feminist groups across the country worked hard to urge state legislatures to vote in favor of the amendment. By the 1982 deadline a total of 35 states approved the ERA, but during that period, conservatives persuaded five states to rescind their approval.

Things began to look up for the ERA in recent years, however. Nevada voted in favor of the amendment after their Republican-led legislature flipped to Democratic in 2017. A Democratic win in Illinois added that state in 2018. Now, thanks to a similar phenomenon in 2018 when the Republican majority in Virginia fell to Democratic-led legislature, the Virginia legislature has voted to become the 38th and final state needed to ratify the ERA.

But don’t get too excited just yet: despite the sheer fact that the ERA has finally gained the last vote needed, full ratification will not be easy. That 1982 deadline might get in the way. While supporters of the ERA are calling for the deadline to be invalidated, opponents of the amendment are pushing to keep it in place. Not surprisingly, the Trump administration is trying to derail adoption of the ERA. The President’s Justice Department issued an opinion last week claiming the ERA passage would need to start all over again because “Congress may not revive a proposed amendment after the deadline has expired.”

Thankfully, it’s not up to the President to officially sign the amendment into the constitution. The archivist of the United States is in charge of the official ratification of the amendment and publishing it to the federal register, but the underlying issue of whether 38 states have actually ratified the amendment will undoubtedly end up before the Supreme Court. Adding to the complexity is the unresolved question of whether the five states that rescinded their vote even had the right to do that. Attorneys general for the states of Alabama, Louisiana, and South Dakota have already asked a judge to prevent Ferriero from certifying the ERA’s ratification and to acknowledge that five states rescinded their ratifications and should not be counted among the 38. A valid worry is that the Supreme Court’s 5 to 4 conservative majority may seek out ways to undermine this historic move to ensure that women’s rights are finally protected by the US Constitution.

Even if looks as though the battle isn’t over quite yet, this moment will still be one for the books. It is absolutely crucial that womxn finally get equal representation in the Constitution in order to secure our rights and safety. When the ERA was first proposed, it was not perceived by proponents to be an inclusive document. The rights of poor working women, women of color, and LGBTQ+ individuals were not part of the conversation. Like the right to vote, the primary beneficiaries were supposed to be upper middle class and wealthy white women.

Now, however, in 2020, where both state and federal governments are the most diverse they have ever been, with state legislatures like Virginia including many WoC and the first trans woman to be on a state legislature, the ERA is finally representative and inclusive of all womxn.

We still have quite a long way to go until womxn officially have equal rights under the law in the United States Constitution, but at a time and under an administration where it feels like the rights of womxn and marginalized individuals are under attack each and every day, a step forward such as this one feels monumental. Thank you for this bit of good news, Virginia. Thank you.