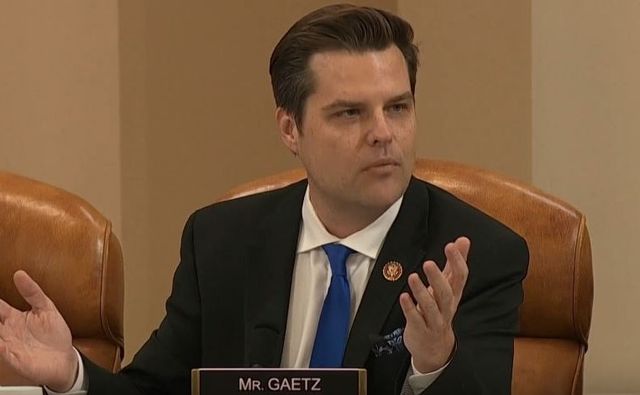 Rep. Matt Gaetz of Florida began an online feud with State Rep. Chris Latvala yesterday, which prompted the resurfacing of a rumor that Gaetz had a sexual point system when he worked in the Florida House. It was first brought up by a reporter for the Miami Herald, Marc Caputo, in 2013 when he wrote a Tweet breaking down the rules of the supposed game: “Hey ladies! Source: young male FL Reps have point-system contest for having sex: 1=lobbyist 2=staff 3=other legislator 6=married legislator.”

Not much was heard about this rumor until now, despite Gaetz’s problematic behavior. He is, to put it lightly, a fellow brownnoser of President Trump and has condemned the media, Democrats, and Nancy Pelosi for his impeachment. “This is not about the Ukraine. It’s about power. Donald Trump has it and House Democrats want it. And so with no crime, no victim, no evidence, no proof, no agenda for America, this impeachment charade marches on, following no rules and adhering to no sense of honor,” he said during the hearings in December.

He’s also on Fox News, like all the time, talking about how wonderful and great the president is and once, in his home state, told a crowd with family members of the victims of Parkland at the House Judiciary Committee hearing on gun violence, that guns weren’t the reason. Instead, he said, “the greatest driver of violence… was not the firearm, it’s the fact that we have an immigration system that allows people to come here violently.” Seems like a nice guy, right?

And, he was arrested for a DUI in 2008, while driving a vehicle registered under his father's name (though the case was dropped, with a lot of suspicion surrounding his father’s contacts being the reason behind that). Gaetz is a third-generation politician and his father, Don Gaetz, has a shady past involving fraud within the medical industry. In a piece titled “How Matt Gaetz Used Daddy’s Money To Become Trump’s Favorite Congressman,” written by Mother Jones, it says, “In the late 1970s, his father co-founded a nonprofit hospice company that successfully lobbied Congress to allow Medicare and Medicaid to cover its services. Once the public money started flowing, the nonprofit became a for-profit corporation, Vitas, that grew into the country’s largest hospice care provider.” In 2013, however, the Justice Department sued the company for having defrauded Medicare with false claims “for services never provided or for patients who weren’t terminally ill.”

More recently, he justified dating 21 year-olds and appearing on their social media accounts with “I’m not a monk.” With all that, it would seem this Gaetz’s guy isn’t so wholesome. But, of course, there’s more. It all began with a Tweet from Chris Latvala, whose family members haven’t exactly been friends with the Gaetz’s, who appeared next to activist Reverend Al Sharpton; the caption reading “It was an honor to meet @TheRevAl today. #FlaPol.” To which Gaetz replied with comments about Sharpton calling police “pigs” and Jews “diamond merchants” finishing with “So that is pretty disgusting.” What’s more disgusting is what Latvalta insinuated in his follow up Tweet to Gaetz: That he created a point-based game, where members of the Florida House could gain them by sleeping with “aides, interns, lobbyists, and married legislators.”

It was an honor to meet @TheRevAl today. #FlaPol pic.twitter.com/ecL4Y6asKO

And you created a game where members of the FL House got "points" for sleeping with aides, interns, lobbyists, and married legislators. Hope DC is treating you well, Comgressman. https://t.co/PGFuQHJbEJ

Have you been drinking tonight? I hope you dont get behind the wheel. I know you have had a rough few days up there.

The argument swiftly descended into snide remarks about Gaetz’s DUI and Latvala's father’s resignation over sexual misconduct--Gaetz even said the word 'daddy'. There have been no other comments about these rumors, or whether an investigation will take place. It seems likely that, similarly to when it was mentioned before and Gaetz’s close connection to Trump, not much will follow.

Following Republican Criticism, Ilhan Omar Opens Up About Her PTSD