Why The "Can A Women Be President?" Question is Getting Old 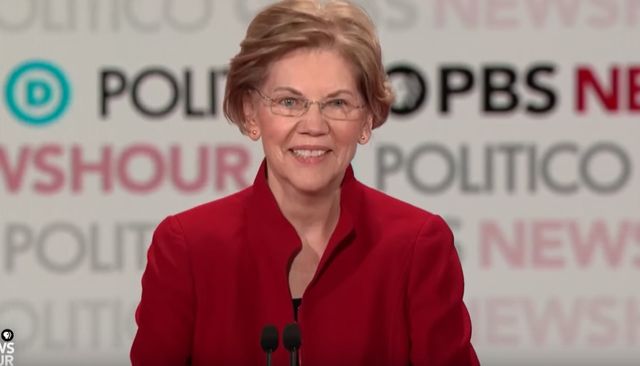 Last night, presidential candidates Elizabeth Warren, Pete Buttigieg, Amy Klobuhar, Joe Biden, Bernie Sanders and Tom Steyer took to the podium to face off in the seventh democartic debate of this election cycle. Just 20 days away from the Iowa caucus, a wide variety of topics were discussed amongst the group including issues on trade, healthcare, and how to tackle the Iran conflict. What garnered the most attention, however, was a question we are, frankly, quite tired of: Can a woman be president?

We saw this question asked again and again when Hillary Clinton was running for office. Over the course of her campaign, it became a theme for her opponents, specifically Donald Trump, to doubt her abilities on the basis of her sex. We’re sure everyone remembers the astounding moment when Trump stated that if Clinton were to take office, she would not be able to regulate her emotions--a common trope used to diminish the leadership abilities of women. How the tables have turned, Mr. President.

So, can a woman be president? Of course she can. Afterall, Clinton did win the popular vote back in 2016. But despite this proof and the blatant misogyny behind this question, it has not stopped it from circulating with the women candidates this time around. The conversation arose last night after allegations were brought up that Bernie Sanders doubted the electibilty of a woman candidate against Trump. While Sanders denies the claims that he made a statement of this sort a little over a year ago, Warren holds to the fact that it was true. Still, she handled the topic with grace stating, “Bernie is my friend, and I am not trying to fight with Bernie,” before going on to tackle the question. Her response was the perfect rebuttal to put an end to this tired inquiry. “This question of whether or not a woman can be president has been raised and it’s time for us to attack it head-on,” the Massacussetts senator stated. “So, can a woman beat Donald Trump? Look at the men on this stage. Collectively, they have lost 10 elections. The only people on this stage who have won every single election that they’ve been in are the women: Amy and me.”

The only people on this debate stage who have won every single election that they've been in are the women. We need a candidate who will excite all parts of the Democratic Party, bring everyone in, and give everyone a Democrat to believe in. That's my plan—and that is why I’m going to win. #DemDebate

While the first part of her statement is what began to trend online, it’s the latter half that truly puts the age old question to shame. “The real danger we face as Democrats is picking a candidate who can’t pull our party together,” Warren continued, “or someone who takes for granted big parts of the democratic constituency.” The fact of the matter is, “can a woman beat Trump?” is a sorry excuse for a question, and what truly needs to be addressed is the issue of which candidates have the ability to bring the democratic party together and get the support of crucial swing states like Pennsylvania, Michigan, Wisconsin and Florida.

While many liberals, feminists and avid Warren supporters were impressed and proud of her answer to the question, a series of anti-Warren hashtags began to circulate online after the debate. From last night and into this morning, two of the top trending hashtags on Twitter were #NeverWarren and #WarrenIsASnake. While it’s hard to discern where the hashtags originated from, with a large number of people believing that the trends may have been started by bots, many of the Tweets appeared to be by Sanders supporters who were angered by Warren’s initial claims.

We saw hashtags like these when Clinton was running for president back in 2016. Tweets such as these only embolden misogynistic ideals, and continue to polarize the democratic party as a whole. It seems, however, that the two trending hashtags have now become a platform for liberal democrats to discuss that turning against one another at this point in time is the last thing anyone should be doing. While there are still a few anti-Warren and sexist comments circulating around the Twitter-verse, new hashtags like #BelieveWomen, which has discussed trusting womxn when they cite instances of sexism, and #BlueNoMatterWho, which champions the idea of voting for the Democratic candidate, whoever it may be, have begun to outweigh the negative.

It’s safe to say that although Warren’s clapback was the perfect response, the question of whether or not a woman can be president will, unfortunately, continue to come up until the day a woman is elected into office. Hopefully, that day will come soon. Because we, like Warren and her women counterparts, truly are 100 percent done.

Tags: Elizabeth Warren , Democratic Debate , Dem Debate , Warren , #ImWithHer
Support Feminist Media!
During these troubling political times, independent feminist media is more vital than ever. If our bold, uncensored reporting on women’s issues is important to you, please consider making a donation of $5, $25, $50, or whatever you can afford, to protect and sustain BUST.com.
Thanks so much—we can’t spell BUST without U.