Political Protest Ban at 2020 Olympics Will Not Silence Megan Rapinoe 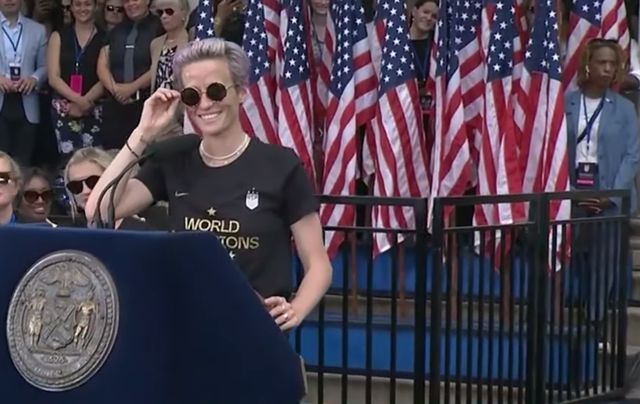 In recent years, sporting events have become synonymous with political protest. Athletes, such as the famed Colin Kaepernick, have used their influence to stand up to injustices and make statements against corruption. Last year, at the Pan American Games in Lima, Peru, two American athletes, Race Imboden and Gwen Berry stood up for what they believed in, kneeling during the medal ceremonies and raising a fist into the air after the national anthem, respectively.

Protest at major sporting events, however, is nothing new. At the 1968 Summer Olympic Games in Mexico City, two African-American runners, Tommie Smith and John Carlos raised their fists in a black power salute, one of the first real instance of political protest at the renowned games. Their demonstration was in response to a variety of social issues happening at the time. It was mere months after the assasination of Dr. Martin Luther King Jr., at the height of the Vietnam War protests and just days after the massacre of 3,000 student protesters in Mexico City. Smith stated on the topic, “It was a cry for freedom and for human rights... We had to be seen because we couldn’t be heard.” Now, over 50 years later, The International Olympic Committee (IOC) have announced that they are placing a ban on protesting during this year’s 2020 Olympics in Tokyo.

The rules are as follows: No taking a knee, no political hand gesture and no “disrespect” during medal ceremonies. Posted last Thursday, the rules not only determine what olympic athletes are unable to do, but where and when they are able to protest. Protesting in the field of play, in the Olympic Village or at medal ceremonies is prohibited. They are, however, allowed to exercise their freedom of speech on social media and during interviews while the games are taking place. While the consequences for what may happen to athletes who break this new “Rule 50” are unclear, as the IOC has stated that they will deal with it on a “case by case” basis, it is safe to say that athletes who attempt to protest may be put on probation for extended periods of time, such as was the case with Imboden and Berry from the Pan Am games.

In a time of such political unrest, both in the United States and abroad, many athletes who are participating in this summer’s Olympics are deeply insulted by this new rule against protest. Megan Rapinoe, an American soccer player known for speaking her mind about political issues took to Instagram following the release of the IOC’s new rule. She stated, “So much is being done about the protests. So little being done about what we are protesting about. We will not be silenced.”

Global Athlete, a start-up created by Olympic athletes like kickboxer Caradh O’Donovan and basketball player Rachael Sport released a statement asserting that the new rule is a direct violation of Universal Human Rights. “Let’s be clear, the Olympic Movement has already politicized sport,” Global Athlete stated in their official response. “Silencing athletes should never be tolerated.” Gwen Berry, the woman hammer-throwing champion who raised her fist in protest at the Pan Am games in August has also spoken out about the new protest ban. Speaking to Yahoo Sports this weekend the Olympian stated on the subject, “We shouldn’t be silenced. It definitely is a form of control.”

During these trying times, politics cannot be ignored. Whether the intentions of the IOC were to silence, or simply to try and keep politics out of sports, their actions were condemnable to say the least. Activist athletes such as Megan Rapinoe use their status and influence to speak out against injustices and stand up for marginalized individuals. We’re sure that the IOC’s new rule will not stop her and other athletes from speaking up and making a difference.