Following Republican Criticism, Ilhan Omar Opens Up About Her PTSD 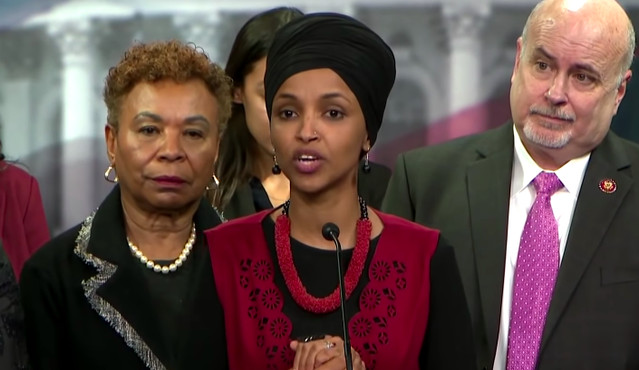 Another day, another gaggle of Republicans revealing themselves to be the true “sensitive snowflakes.” In response to escalating military action against Iran, Rep. Ilhan Omar cited her childhood experience as a refugee as a motivating factor to her anti-war stance.

"I feel ill a little bit because of everything that is taking place and I think every time I hear conversations around war, I find myself being stricken with PTSD," she said at a recent news conference.

Rep. Omar fled war-torn Somalia with her family when she was only 8 years old, spending four years in a refugee camp before being settled in the United States. However, this apparently was not good enough for some critics. Rep. Jim Banks of Indiana took to Twitter, calling Omar’s remarks “a disgrace.”

Rep. Ilhan Omar complained she’s “stricken with PTSD” because of recent events in the Middle East.

This is a disgrace and offensive to our nation’s veterans who really do have PTSD after putting their life on the line to keep America safe. pic.twitter.com/twhZDuUDu0

Veterans are not the only people who can experience PTSD. Post-Traumatic Stress Disorder is defined by the American Psychiatric Association as “a psychiatric disorder that can occur in people who have experienced or witnessed a traumatic event such as a natural disaster, a serious accident, a terrorist act, war/combat, rape or other violent personal assault.” Furthermore, research into the link between racism and PTSD shows that the daily lived experience of racist aggressions, both micro and macro, can have lasting damage on a person's psyche, making it especially heinous that Omar's critics refuse to take a Black woman at her word.

Omar responded to Banks' comments on Twitter. "The trauma of war is not only felt by the soldier on the battlefield," she wrote. "It is felt by the child huddled under the bed as bombs go off outside her window."

The trauma of war is not only felt by the soldier on the battlefield. It is felt by the child huddled under the bed as bombs go off outside her window.

I am that child and here in Congress I will always speak out against war.

As the only current member of Congress to experience war as a civilian, Ilhan Omar is uniquely placed to understand the horrors of war. To discount that experience in order to justify your own bloodlust for carnage and destruction is the real disgrace, Jim Banks.

Republicans might try to use Quasem Soleimani being a bad guy as the continuing rationale for endless war, but as Omar points out: “If we are only focused on killing the monsters of the world, we forget the children, the elderly, the people with disabilities who are going to be caught in the crossfire... who, if they survive, become the walking dead like myself."