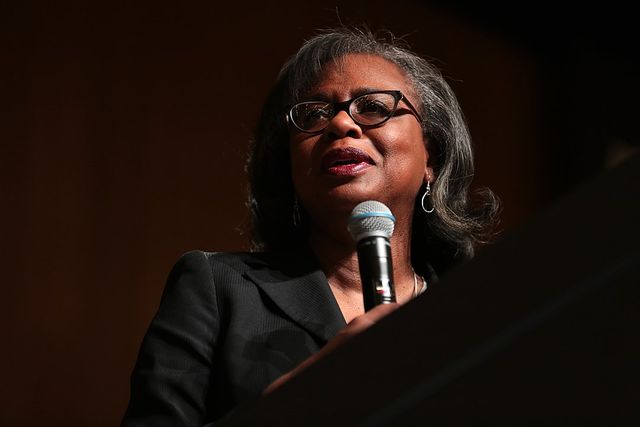 Almost three decades ago, Anita Hill stood up against then-Supreme Court nominee Clarence Thomas. Today, she continues to fight for survivors — and now, Hill is standing up for women in Hollywood and working with the Hollywood Commission by urging folks to take a survey about sexual harassment, assault, and discrimnation in the workplace. As of December, thousands had already taken the survey, which has been extended for this year’s award season.

If you are not familiar with Hill’s testimony in 1991, just imagine Christine Blasey Ford’s more recent hearing — but with Joe Biden presiding over it. Hill accused Thomas of sexual harassment and then, in front of an overwhelmingly white male Judiciary Committee, was forced to relive traumatic experiences and answer a slew of invasive questions. Sounds all too familiar, right? Of Brett Kavanaugh's hearing, Hill said, “Those were all the things that I experienced in 1991 and it was what I experienced in 2018 – that failure to really help the public understand very significant issues and to understand that those issues, and seeking truth in those issues, aligned with the interest of having a Supreme Court that people have confidence in, they have faith in, they believe in the impartiality of and they believe in the integrity of."

In a 2017 speech in Austin, Texas, following the rise of #MeToo, Hill began to see a shift. “The energy and even anger of this moment says we are ready to end sexual harassment,” she said. “We are ready to take on the deniers and enablers and ready to share our truth.” And she's right.

The Hollywood Commission formed in 2017 following the allegations against Harvey Weinstein. They survey is open to "all people working or who have sought work in the entertainment industry," and the commission aims to create safety in the workplace, come up with solutions, and eliminate sexual harassment.