Tulsi Gabbard Has Got To Go 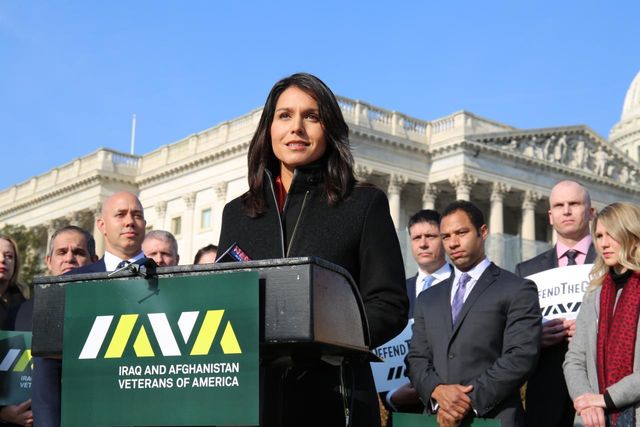 Tulsi Gabbard is, to paraphrase Michelle Wolf, “about as helpful to women as an empty box of tampons." Last night, she was the only congressperson to vote “present” during Trump’s impeachment, and one of three Democrats who voted not to impeach him on two charges of abuse of power.

Gabbard describes her rationale as such: “I am standing in the center and have decided to vote Present. I could not in good conscience vote against impeachment because I believe President Trump is guilty of wrongdoing. I also could not in good conscience vote for impeachment because removal of a sitting President must not be the culmination of a partisan process, fueled by tribal animosities that have so gravely divided our country.”

By referring to impeachment as a partisan process, Gabbard seems to suggest that the facts have been distorted in this case. Facts aren’t partisan, and it’s beyond clear that Trump has abused his power. In place of impeachment, Gabbard has called for a vote to censure Trump, a formal process that would essentially culminate in a slap on the wrist for the president.

This is just one of many reasons why it is time to say “hit the road” to Tulsi. Just because she touts herself as an anti-establishment candidate, it does not inherently mean she’s a good choice for president.

Gabbard has long been criticised by those in her own party. She has especially come under fire for her meeting with Syrian dicator Bashar al-Assad, in January 2017. She claims she met with him in order to "prevent more of my brothers and sisters in uniform from being sent into harm's way to fight in these wasteful counterproductive regime change wars.” Gabbard thinks it’s important to meet with anyone who she thinks will help her better advance her point of view forward, “even if it means meeting with a brutal dictator.”

Those who support Gabbard point out her anti-interventionist stance on foreign policy. “In short, when it comes to the war against terrorists, I’m a hawk. When it comes to counterproductive wars of regime change, I’m a dove,” she told the Hawaii Tribune-Herald last year. As a member of the military, Gabbard points to her experience serving in Iraq and the betrayal she felt by her own government as motivating factors for her views. We can and should make the very valid critique that the United States has been responsible for countless war crimes and atrocities abroad. But to do it without also acknowledging that Assad committed genocide against his own people is a strange stance for her to take.

As Branko Marcetic wrote in Jacobin, Gabbard's anti-war rhetoric often focuses on the cost of these wars on American soldiers instead of the carnage they unleash and the destruction they make of the countries they invade, what Marcetic referred to as "nationalism in anti-war garb." And Gabbard also increased her public profile by making numerous appearances on Fox News. "Before she became a progressive darling for endorsing Sanders, Gabbard became a conservative darling for relentlessly hawking the idea — later popularized by Trump — that Obama’s foreign policy was failing because he refused to use the term 'Islamic extremism,' or some variation of it," he added.

Gabbard also has a history of homphobia. Her father, Mike Gabbard, is also a politician and has run organizations such as The Alliance for Traditional Marriage and Stop Promoting Homosexuality, the former group noted for endorsing conversion therapy. It was this experience working with her father that first inspired Gabbard to become involved in politics. At least twice, the Hawaii Democrat publicly called the LGBTQ community and supporters of same-sex marriage “homosexual extremists.” In one instance in February 2004, Gabbard, at the time a 22-year-old state representative, testified against legalizing same-sex civil unions.

Even if you want to make the argument that she was raised by her family to have extremist views, 22 is way too old to still be homophobic. As recently as 2016, despite backing legislation in support of LGBTQ rights, it doesn’t seem like her personal views have changed. In a profile with OZY, Sanjena Sathian noted that, upon asking Gabbard about her past homophobic stance, “She tells me that, no, her personal views haven’t changed, but she doesn’t figure it’s her job to do as the Iraqis did and force her own beliefs on others.” That doesn't sound like a true champion for the LGBTQ community.

Obviously, Tulsi Gabbard is not the only candidate who has fallen short of the rhetoric they posture. All of them have, to an extent, because that's what a politician inevitably does. But for the few rando leftists out there in the Twitterverse trying to make Tulsi happen: this isn't it.

Tags: Tulsi Gabbard , 2020 , impeachment , Congress , Donald Trump
Support Feminist Media!
During these troubling political times, independent feminist media is more vital than ever. If our bold, uncensored reporting on women’s issues is important to you, please consider making a donation of $5, $25, $50, or whatever you can afford, to protect and sustain BUST.com.
Thanks so much—we can’t spell BUST without U.