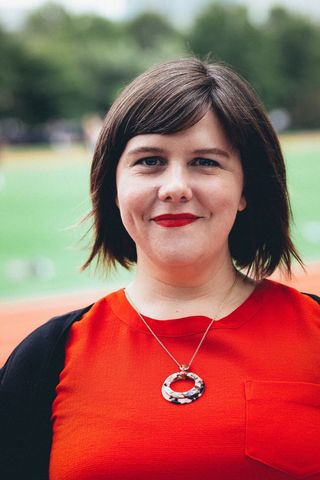 Mark your calendar for June 23, 2020 — that is, the day of New York's primary election. Since 1973, the 50th District has been represented by the same incumbent, but Emily Gallagher is hoping to change that. With a platform that champions women, survivors, and more, she's exactly what North Brooklyn needs as we enter a new decade. And after reading this interview, you're sure to agree.

Gallagher introduces herself as an activist and talks about having spent more than 13 years in Greenpoint, Brooklyn where she's been “organizing for environmental justice, affordable housing, and the rights of victims of sexual violence.” She describes what it’s like to be unemployed, underemployed, and scrambling to make rent; what it’s like to be a survivor of sexual violence and harassment, and what it’s been like watching her friends’ rapists in court walk free.

Why are you running?

These experiences [unemployment, underemployment, etc.] don’t make me unique in our city. But they’re too rarely reflected or shared by our representatives in Albany. The disconnect is particularly glaring in North Brooklyn, where the overwhelming majority of residents are now under 40 and the incumbent has been in the same office since 1973! There hasn’t been a competitive election in more than a decade. And I’m the only second new Democratic candidate to run in 47 years. There’s way too much at stake to put our democracy on autopilot.

Something that I’ve learned in my years of organizing is that many people in our community feel totally left out of the decision-making process and confused by New York State government in general. I’ve come to feel that this is by design to benefit people who already hold power. Until 2018, most of what happened in Albany was largely invisible to most people — but it’s where key decisions about our housing, our environment and our transportation happens.  When the Independent Democratic Caucus, a group of Democrats who were aligned with Republicans, was overthrown in 2018, suddenly progressive bills started to pass and issues that had been stagnant for over 20 years started to move. But it’s not enough. What many people are coming to realize is that the leadership in our state is still part of a rusty old machine that works primarily to benefit themselves and their donors.

We’re facing down a transportation crisis, a housing crisis, and a climate crisis — and we need real fighters in Albany to tackle these existential challenges.

If elected, what do you hope to achieve?

There are so many challenges facing North Brooklyn but the three biggest issues I plan to champion are transportation, housing, and the environment.

Below ground, the subway has been neglected and underfunded for decades. And instead of tackling the real infrastructure issues head on, the Governor wants to flood the system with 500 new police officers to arrest and harass food vendors and turnstile jumpers. Above ground, bad planning and the dominance of cars leaves pedestrians and cyclists dead or maimed almost every week. Meanwhile, they’re talking about cutting back bus service! You’d be shocked how few representatives in Albany ride the subway or hop on a bike. They just don’t get it. But I do. And I’m going to fight like hell for a reliable, safe, and fully-funded green transportation in every corner of this city.

We also need healthy, stable, truly affordable housing. Earlier this year, relentless organizing and successful challenges to the party machine allowed us to finally get historic tenant protections passed. But they’re not being enforced effectively. And they left out hundreds of thousands of renters who aren’t in rent control system. For years, we’ve been effectively gaslit by our leaders: to get more affordable housing, they say, we need to build more luxury towers. We’ll carve out some “affordable units.” Maybe it’ll trickle down. It hasn’t. Instead, hundreds of thousands of apartments sit vacant, accruing wealth for distant investors or occasionally visited as “pied-à-terres.” Gentrification continues its rampage across wide swaths of the city. Tenants are harassed and hounded out of their homes, while small business storefronts go vacant. We need a radically different approach, including ending subsidies for luxury development, passing vacancy and luxury taxes, passing universal rent control, and fully funding our public housing system.

My community also deserves a healthy environment. From contaminated development sites to the fumes off the BQE, we still struggle with the toxic legacy of industry. Polluters aren’t being made to pay for what they’ve done--and when they do, the money is insufficient and gobbled up by the general fund. Meanwhile, the threat of catastrophic climate change draws ever closer. We may have just passed an ambitious climate change law but we need representatives who will chase it, clarify it, and make sure the goals are being met.

What’s your experience been with politics?

I’ve been involved in grassroots organizing since I was a teenager but I was always super skeptical of politicians. Like a lot of young people, I felt cynical that our electoral system could ever deliver the transformative changes we need. But after years of working with my neighbors in North Brooklyn, trying to protect tenants and cyclists and the environment, I came to realize what was possible — and what’s not — in the absence of aggressive and progressive political leadership. So I decided to step up. It’s scary but it’s also hopeful and inspiring.

Let's talk about your opponent. In your own words, why do you think you’re the candidate to vote for?

My opponent is Joe Lentol, who’s held the same office since 1973. His dad had the seat before him. And his grandfather did too. Three generations of a single family have represented North Brooklyn in Albany basically uninterrupted since 1919. It’s nuts.

I respect and value the public service of my opponent. I know he cares about the district. But you can’t stay in office for that long without accommodating the political machine and the powerful interests that have made this city so difficult for anyone who’s not rich. And frankly, our community is significantly more progressive than its representation in Albany. I’m a fighter, not a follower, and I won’t be afraid to piss off the very people he’s taken money from over his long career.

Do you think that having a woman representing North Brooklyn will lead other women to fearlessly run for government office positions? Do you hope that will happen?

I absolutely hope that will happen. I think government, directly and indirectly, make decisions that impact women above and beyond anyone else. My community deserves a champion for women’s rights. We need someone who is unapologetically pro-choice. We need someone who doesn’t drag their feet on sexual harassment hearings and laws, and that doesn’t make excuses for serial abusers in power. It’s not enough to be a convenient ally — we need allies when it’s inconvenient and there’s great risk to taking a stand. Only someone who has experienced abuse can understand what it’s like to be left alone in the face of danger. I will never allow survivors of intimate violence, women or the LGBTQ+ community feel unsupported. They will know I am there because I will be leading the way.

If you live in New York, learn more on Gallagher's website, or check out the upcoming event: A Comedy Benefit for Emily Gallagher.