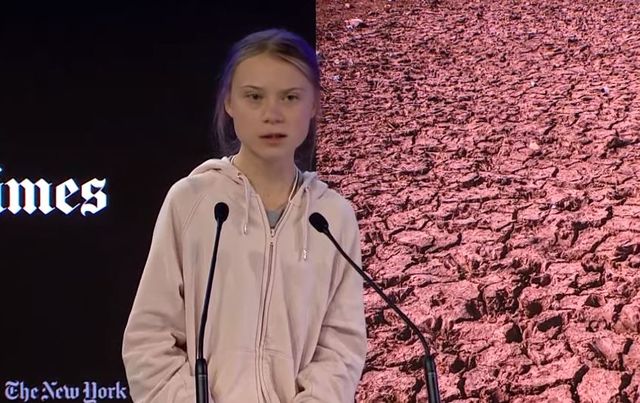 Almost every day I scroll through my social media feeds I see another post about the teenage environmental activist, Greta Thunberg, “coming under fire” or “being slammed.” Whether it’s Donald Trump, Piers Morgan, a Fox News broadcaster, or a nameless meme creator, it seems as though it’s impossible for many conservative figures to resist the urge of sharing their thoughts and criticism of her. Frankly, it’s borderline humorous at how much a Swedish 17-year-old, who has no intentions of enraging anyone can do just that. And it isn’t only the Internet trolls with profile pictures of guns, Jesus, or the American flag either—if Trump weren’t a famous millionaire he’d definitely have a combination of all three—it’s seemingly professional people with some of the highest titles and audiences.

In a little over a year, Greta Thunberg has become a legend. I mean, even my dad knows who she is. Her views and first homemade sign have ignited global protests and movements amongst the younger, and other, generations to become much more aware and active about the truth of climate change. She’s spoken at countless climate and political summits, lead school walkouts and now, she’s the TIME’s Person of the Year. Thunberg’s continual message has remained the same: We need to do something about climate change. Now. Moreover, why haven’t you “adults” done anything about yet? Why should she have to be the person, the child, who has to take time away from childhood blissto emphasize this catastrophic future we are currently heading towards? For all her work being done to deflect the warming planet’s effects, it still isn’t enough.

And at the Davos Forum this week, her message was, again, reiterated. She said,

“Our house is still on fire. Your inaction is fueling the flames by the hour." Adding that debating on how much we should lower our emissions is wasting time, and truthfully not enough, rather, they "have to stop.”

The people that hate on her remain unmoved that she’s too angry, too much. It’s an all-too-familiar rhetoric, by steering the narrative away from what she’s actually saying and pointing out her passion (or hysteria, depending on who you are), Aspergers, age and looks in an attempt to dismiss her. She isn’t a scientist nor claims to be; the facts and figures she’s using are readily available to anyone who wants to look them up. Her panic is also very plausible. I’m panicked; everyone should be. Yet, because she isn’t even old enough to have a high-school diploma “she doesn’t know what she’s talking about.” Thunberg is reiterating the many, many studies on climate change and sharing her worries over what is very real and happening right now, simply asking for politicians and world leaders to act. She isn’t spreading “fear” she’s spreading facts.

Instead of congratulating a young girl on her drive, on all the things she has achieved in such a short time and at such a young age, there’s a streak of middle-aged men who can’t seem to articulate why they feel as angry as they do about her. Trump has told her to “Chill” and that she should go to “Anger Management”. Erik Erickson wrote, “This is a case of the inmate running the asylum”. Brazil’s President called her a “brat”. Maxime Bernier, a far-right leader in Canada said she was “clearly mentally unstable.” Putin said bluntly, “I don’t share the common excitement [about her].”

Thunberg’s fervor for climate change riles up those that are the least active about it, which could be one of the reasons so many are opposed to her. Her anger is justified because no one is really doing much about it who could. What people should be Tweeting about is that a young girl had to spread the message- and is doing a better job of it than if they tried: This, is the main reason, I believe. Adult men are confused and irate that she is getting more attention and things done than they are. Trump isn’t shy about his desire to be on the face of Time Magazine and must definitely feel usurped by a teenage girl that doesn’t fit his ideal standards of beauty or demeanor.

With her casual dress sense, long braids, and little to no makeup (she also looks much younger than she is), many men probably can’t categorize her in the way famous teenagers have been sexualized in the past (see: Britney Spears). She isn’t trying to get a reality TV show, “look cute,” or become Insta famous; she solely wants to save the planet. While there’s nothing wrong with wanting any of those things, in a society where young equals beautiful, innocent and appealing, men are left perplexed and can’t place Thunberg at all. Rather, they have to listen to what a 17-year-old girl is saying and witness so many others take her seriously. Imagine.

Really, this is a reminder that young women, despite their accolades, will be criticized more heavily than young men. Her looks, voice, clothes and expressions have been scrutinized so much that it mirrors the way other women, like Hillary Clinton was in 2016, are unfairly judged. But just a reminder: Greta is a child. It is unacceptable for adults to pick at her the way they have. By POTUS bitching about her on social media, this gives way to other people to think it’s okay and chime in. Shouldn’t he have better things to do, anyway?

My admiration for Thunberg isn’t diminished by all of the backlashes she has faced. If anything, that’s a factor that has made mine grow through her resilience and strive to keep doing what she’s doing, regardless. (Admittedly, I am about two Tweets away from making a Leave Greta Alone crying video.) It’s troubling, sure, to see such ugliness spewed on someone who doesn’t deserve it, but like she said, “The world is waking up. Change is coming whether they like it or not.” Future leaders of the younger generation have been motivated to contribute to the fight against climate change all over the world- from Japan to Italy to Chile. There is no doubt that she has made a change already and will continue to.