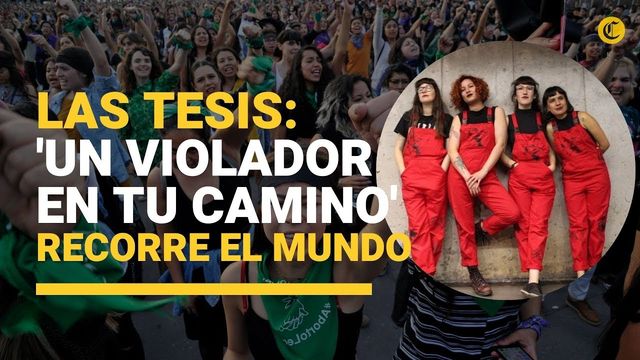 A protest song about rape culture, victim shaming, and femicide in Chile has become an anthem for feminists worldwide. It’s called “A Rapist In Your Way” — in Spanish, “Un violador en tu camino.” It was created and choreographed by the Chilean feminist collective LasTesis; protestors have been putting on blindfolds and party dresses and using the song's punchy lyrics to fight the patriarchy and the country's human rights violations against women.

LasTesis is a feminist theater group that’s located in the Chilean city of Valparaiso. The lyrics of the song were based on the words of feminist anthropologist Rita Segato, who argues “that sexual violence is a political problem, not a moral one.” The lyrics are about how institutions such as the police and the political power structures might not defend but still uphold the systematic violations of women’s rights. In their words, “the rapist is you/ It’s the cops/ The judges/ The state/ The president.”

This protest song is the latest effort in a movement to demand justice and human rights in Latin America. It was performed on the International Day for the Elimination of Violence against Women on November 25, where Chilean anti-government protests were repressed, and the song is now spreading all over the world.

In Latin America and the Caribbean, according to the Economic Commission, at least 3,529 women were victims of femicide in 2018. In 2017, the U.N. Office on Drugs and Crime estimated that 87,000 women were killed, with the majority having been killed by a partner or a member of their family.

This movement isn't only taking place in Chile. In Turkey, the World Health Organization data shows that 38% of women are subject to violence from a partner in their lifetime, compared to 25% in Europe. Last week, female Turkish lawmakers staged a protest at Turkey’s general assembly singing this Chilean song (turned feminist anthem) to highlight the country’s crisis of femicide.

This protest song spread like wildfire on Twitter. It’s moments like this one that bring women together and empower us to continue this fight against human rights violations — around the world.

A Feminist Report From The U.S.-Mexico Border

Tags: LasTesis , protests , Chile , International Day for the Elimination of Violence against Women , Rita Segato , Feminism
Support Feminist Media!
During these troubling political times, independent feminist media is more vital than ever. If our bold, uncensored reporting on women’s issues is important to you, please consider making a donation of $5, $25, $50, or whatever you can afford, to protect and sustain BUST.com.
Thanks so much—we can’t spell BUST without U.