Reporter Who Was Sexually Harassed Live On Air Speaks Out 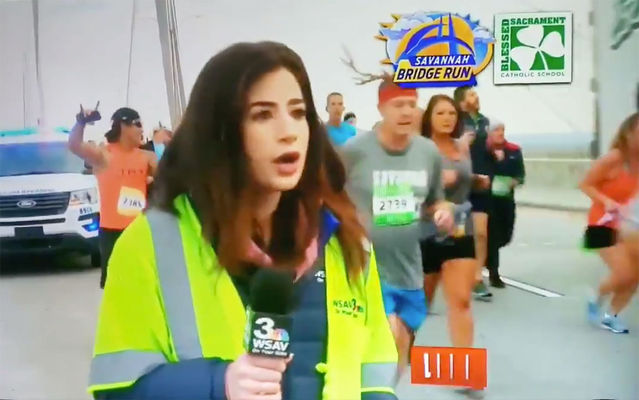 Reporter Alex Bozarjian was on the job this past Saturday to cover the Savannah Bridge Run for WSAV. As she stood next to a stream of participants running by, a man proceeded to smack her backside and continue running, a moment that went viral on Twitter this weekend. The runner has now been identified as youth group minister and Boy Scout leader Tommy Callaway.

You know, the Boy Scouts, who until 2015 banned openly gay leaders for fear that they would corrupt the children of America? And who still allow groups to select their leaders based on religious beliefs, meaning that they actually can discriminate based on sexuality?

Bozarjian tweeted about the incident, and later went on CBS This Morning to describe her experience. “I think what’s most important here is that he took my power and I’m trying to take that back," she said. "I think what it really comes down to is that he helped himself to a part of my body.”

To the man who smacked my butt on live TV this morning: You violated, objectified, and embarrassed me. No woman should EVER have to put up with this at work or anywhere!! Do better. https://t.co/PRLXkBY5hn

Callaway’s lawyer described him as “a loving husband and father,” and isn’t that always the case? Look, I don’t care how many times this man has offered to throw around the ole pigskin with his son - he harassed a young woman on live TV, in front of everyone to see. He has been banned from all future races held by Savannah Sports Council. Unfortunately, despite the video being pretty clear cut evidence that he harassed Bozarjian, he was still given air time to tell his side of things on Inside Edition. His story changes as he’s in the process of telling it, too.

"I was caught up in the moment. I was getting ready to bring my hands up and wave to the camera to the audience, there was a misjudge in character and decision-making. I touched her back; I did not know exactly where I touched her."

How someone can bring their hand up to wave and then accidentally slap their butt...is perplexing. And unfortunately, this is not the first time a female reporter has been harassed on air: at least three incidents of groping were documented during last year’s World Cup coverage.

Tags: Alex Bozarjian , Tommy Callaway , sexual harassment , female reporters
Support Feminist Media!
During these troubling political times, independent feminist media is more vital than ever. If our bold, uncensored reporting on women’s issues is important to you, please consider making a donation of $5, $25, $50, or whatever you can afford, to protect and sustain BUST.com.
Thanks so much—we can’t spell BUST without U.