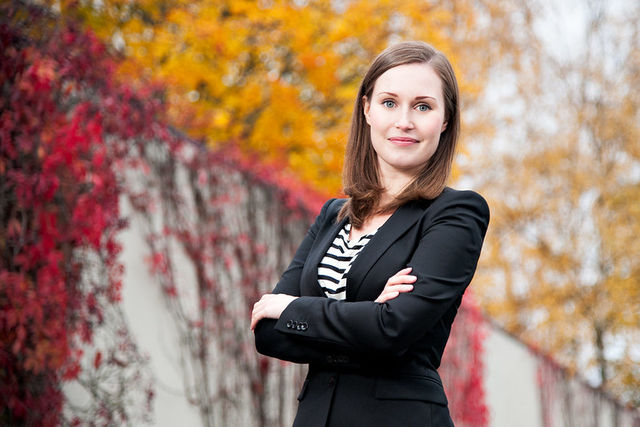 Another country is succeeding in a way the United States doesn’t know how to, yet again. Finland’s Sanna Marin is going to become the world’s youngest sitting Prime Minister at 34-years-old. Two reasons why the U.S. still can’t get something like this done: we don’t have prime ministers and we’re afraid of successful, strong women. According to NPR, “Sanna Marin is set to become Finland’s third female prime minister—and its youngest—leading a coalition of four other parties, all headed by women.” All headed by women! Of the five leaders, four are under the age of 35. Although, Marin told reporters that the focus shouldn’t be on her identity. Even though age and gender shouldn't matter, we love this for her. The fact that she's a woman is obviously great for women and the rest of humankind, but her age is a big deal, too. Marin is a millennial. The world has no faith in millennials, but she is becoming the Prime Minister. This is huge. She's going to show us all that young people can do great things.

Only recently have the Social Democrats led Finland’s left-wing alliance, but the populist right-wing Finns Party has been strongly protesting them. No matter what, both sides should be in agreement that Marin’s promise to continue supporting welfare programs and an “equal and fairer society” is the right one (NPR).

Once Marin is sworn in, she will be Finland’s youngest prime minister in history. Aside from her, only one other person in the world became prime minister at a young age—24, to be exact (conservative British politician William Pitt) in 1783. But none of us were alive in 1783, so it doesn’t count. You heard it here first: Sanna Marin is the youngest-ever prime minister in world history. William Pitt? Never heard of him. Sorry to this man.

While we’re at it, let’s name some other things that Finland is doing a better job with than the United States. The Finns have been named the happiest people in the world. According to the United Nations’ Sustainable Development Solutions Network, which uses a statistical model based on a spectrum of examinations ranging from their citizens’ healthy life expectancy and income to their governments’ levels of social support and government corruption, Finland went from its fifth-place finish to first. The United States isn't even in the top 10.

Here’s another, although Finland is no longer No. 1 for the highest test scores in school, it is still regarded as one of the more successful systems in the world. The National Center On Education And The Economy doesn't even have the United States on their list of countries as having one of the best performing education systems. One lesson from this, according to The Washington Post, is that the “quality of education shouldn’t be judged by the level of literacy and numeracy test scores alone. Successful education systems are designed to emphasize whole-child development, equity of education outcomes, well being, and arts, music, drama, and physical education as important elements” of the curriculum. This has been copied word-for-word, but there is no better way to say this, except for maybe, “TEST SCORES DO NOT DEFINE INTELLIGENCE.” Had to shout that so all of our congresspeople who are closer to 100-years-old than 50-years-old could hear it.

I can’t wait to see how Finland thrives with a government full of young leaders. Sanna Marin's win is a direct result of her country doing better. They're ahead of the game! Rather than only elect older people—that younger generations can't relate to—because of the fear of change, Finland has pushed through and is ready to see what change can bring.

Tags: news , Sanna Marin , Finland , prime minister , leadHERship
Support Feminist Media!
During these troubling political times, independent feminist media is more vital than ever. If our bold, uncensored reporting on women’s issues is important to you, please consider making a donation of $5, $25, $50, or whatever you can afford, to protect and sustain BUST.com.
Thanks so much—we can’t spell BUST without U.