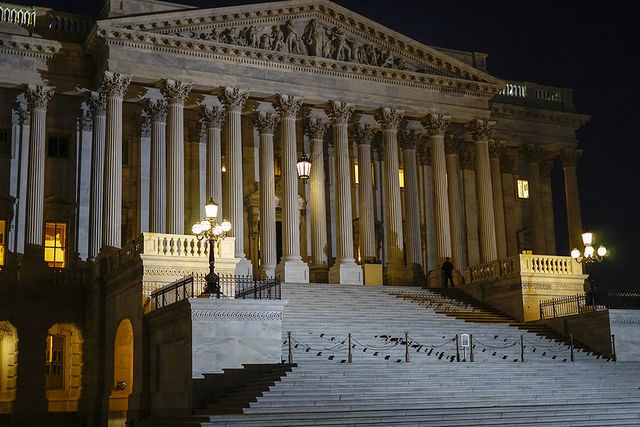 Senate Republicans have just unveiled the new Violence Against Women Act (VAWA), their version of an important 1994 legislation dealing with cases of domestic violence. This new bill, however, is currently facing criticism as it now lacks crucial safety provisions that would protect Native and LGBTQ+ survivors.

Republican Senator Joni Ernst, the bill’s sponsor, introduced VAWA on Wednesday, Nov. 20. In a statement, she asserted that the bill puts “the wellbeing of women and children of sexual and domestic violence first” and is “a practical solution that focuses on survivors, not politics.” But, according to the Huffington Post, this new legislation lacks a key gun safety provision that was included in an earlier VAWA bill. It also leaves out a provision that would allow VAWA grant recipients to train staff in an effort to stop discrimination against LGBTQ+ victims of abuse.

“Months ago, the House passed a bipartisan Violence Against Women Reauthorization Act with strong protections for survivors who are threatened by armed domestic abusers,” said Robin Lloyd of Giffords, a nonprofit focused on gun violence. “Yet the Senate majority’s only response, after all this time, is a bill that maintains easy access to firearms for individuals with a record of threatening behavior and criminal convictions. It’s unbelievable and unacceptable that we’re in this place today where some of our elected leaders care more about protecting domestic abusers than they do victims.”

Most alarmingly, Ernst’s bill weakens tribal courts and infringes on tribal sovereignty, which, according to the National Indigenous Women’s Resource Center (NIWRC), tremendously hurts Native women, who are subject to extremely high rates of violence.

“As the chairwoman of the Tulalip Tribes, one of the first tribes to exercise criminal jurisdiction over non-Indians for domestic violence-related crimes under the 2013 VAWA tribal provisions, we are deeply disappointed by the VAWA legislation introduced by Senator Ernst,” Teri Gobin said in a statement. “The provisions in Senator Ernst’s bill would prevent tribal courts and tribal governments from protecting the most vulnerable, our women and children.”

The bill eliminates gains made in the 2013 VAWA reauthorization that gave tribes the jurisdiction they urgently need to prosecute crimes committed by non-Native men who abuse Native women on tribal lands. Under this new legislation, abusers would also have the opportunity to further “strike out” their victims and tribal government officials by claiming that their own civil rights had been violated, per the Huffington Post.

Native women desperately need stronger VAWA protections and provisions. According to the Indian Law Resource Center, more than four in five Native American and Alaska Native women experience violence, and more than one in two have experienced sexual violence. These women also continue to endure the highest rate of sexual assault and are murdered at 10 times the national rate. Additionally, the National Congress of Native Indians reports that about 59 percent of Native women were married to non-Native men as of 2010; this further stresses the need for tribal courts to have jurisdiction to prosecute non-Native perpetrators of domestic violence.

To possibly appease the backlash against her bill, Ernst included a separate legislation in VAWA called Savanna’s Act, a bill that addresses the crisis of missing and murdered Indigenous women. But, according to the Huffington Post, including this bill “could backfire … if the sponsors of Savanna’s Act don’t want their bipartisan legislation tied up in a broader fight over VAWA.”

In late December of 2018, Congress allowed the Violence Against Women Act to expire after the extension that temporarily reauthorized it ran out during the partial government shutdown. As a result, the VAWA has been lapsed for nearly a year, which has most likely affected federal funding for domestic violence programs throughout the United States.

Many Native tribes and advocacy groups are continuing to express their concern and frustration over the Senate Republicans’ VAWA bill. According to a press release from the NIWRC, they are “hopeful that the Senate will be able to pass a new bill that protects tribal sovereignty, instead of diminishing it, and thereby increasing safety for Native women and children.”

“Despite the fact that the implementation of VAWA 2013 has been a success—both for the protection of victims in our communities as well as the due process rights of non-Indian defendants—Ernst’s bill is based on the assumption that the protections for Native victims in VAWA 2013 must be rolled back because tribal courts are not capable of fairly administering justice," said Mary Kathryn Nagle, a partner and counsel member of the National Indigenous Women’s Resource Center. “Placing paternalistic restrictions on tribal courts in the name of 'due process' is nothing more than a disguise for prejudice. Legislation that strips tribal courts of their inherent authority to protect victims in their communities based on prejudice alone must be stopped.”

A Step in the Right Direction with the IVAWA