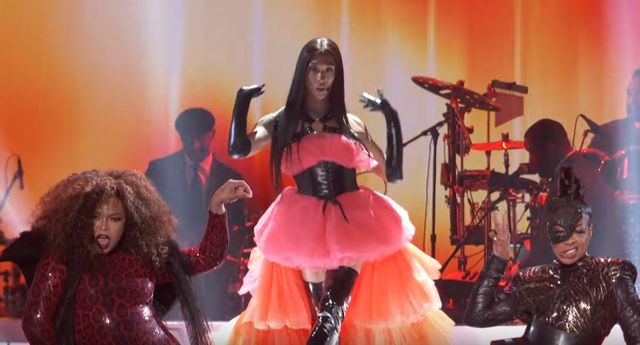 On November 17, marked the 32nd Soul Train Music Awards which aired live on BET. For the second year in a row, it was hosted by comedic powerhouse actresses and real-life besties Tisha Campbell and Tichina Arnold.

Though the award ceremony traditionally honors excellence in black music and entertainment, a small act of inclusion in the ceremony's opener, is a reminder that black women are still doing a lot of the heavy lifting in the community.

Following the awards, Tisha Campbell appeared on The Real and explained to the table, that as producers, it was important to be inclusive. “Last year the first time we did it, we really wanted to include all generations. But this time, it was like, ‘Just be inclusive.’ So we really fought hard and got MJ Rodriguez to be apart of it.”

And voilà, a moment was made.

Now she didn’t specify why the duo had to fight so hard to include MJ Rodriguez, but one could easily make an educated guess. BET has a bit of a reputation of mistreating queer Black folks. Many can recall how B. Scott was treated during his time at the BET Awards in 2013. Not to mention, despite the groundbreaking success of FX’s POSE, the series has been mostly snubbed during award seasons for the past two years from the Golden Globes, Emmys, and SAG respectively. Earlier this year, fellow POSE star Angelica Ross called out Black Girls Rock! for not including trans women either.

Sure, POSE cast member Billy Porter always includes his community with him in every space, and managed to snag a few awards and blow everyone away with his outstanding attire but it can’t go without saying that too of the T in LGBT+ is cast out of the bunch by both heterosexuals and the queer community. The overwhelming praise Porter receives as a gay black man in a dress does not negate the blatant exclusion of his trans castmates Indya Moore, MJ Rodriguez, and Dominique Jackson.

But the erasure and exclusion that hits closest to home, is surely that of the NAACP and BET Awards. The point of these organizations and platforms is to create safe spaces for Black people by Black people. Though homophobia and transphobia aren’t new concepts and aren’t exclusive to the Black community, it still matters that in 2019 that as well as fighting the masses, queer folks have to fight within their own race.

As least 22 Trans people have been murdered this year—all of them Black women paired with the alarming under reported high number of black girls missing is proof that we're literally all each other has.

But if you were ever confused as to what Black sisterhood looked like, this is it—pulling you your sister any way that you can.

Check out the legendary mothers of the House of Cellulite, House of Menopause, and House of Evangelista slay below:

Tags: POSE , FX , BET , Soul Train , MJ Rodriguez , Tichina Arnold , Tisha Campbell , trans visibility , trans rights , Billy Porter , Angelica Ross , Dominique Jackson , Indya Moore
Support Feminist Media!
During these troubling political times, independent feminist media is more vital than ever. If our bold, uncensored reporting on women’s issues is important to you, please consider making a donation of $5, $25, $50, or whatever you can afford, to protect and sustain BUST.com.
Thanks so much—we can’t spell BUST without U.