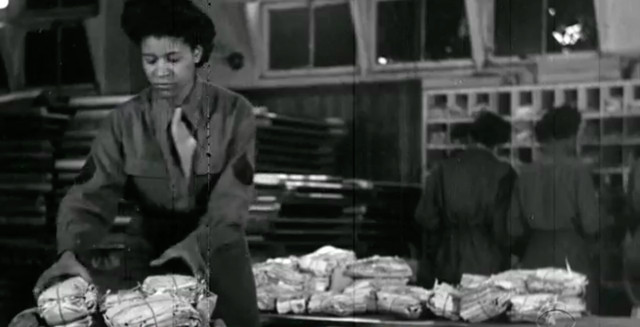 World War II is one of the most talked-about and thoroughly dissected time periods of American history. We’ve heard about the brave men who stormed the beaches of Normandy on D-Day. We’ve heard about Rosie The Riveter and all the women she represented. But some of the most underrated heroes from that time were the hundreds of African-American women who pitched in overseas during the war.

Officially called the 6888th Central Postal Directory Battalion, the unit was comprised of over 800 African-American women, who worked in Birmingham, England to sort through the backlog of mail addressed to the soldiers. Despite being in a warzone with regular bombings, the women worked non-stop in 3-hour shifts, seven days a week. The unit proved highly efficient, completing the task 3 months ahead of time.

While these women may not have been out on the front lines, former battalion member Lena King, 96, explains that were it not for their mail, the morale of the army would have been much lower. After clearing out all the mail in Birmingham, the unit moved on to France, right after V-E Day, where they took on an even more arduous task—a mail backlog from as long as 2-3 years. Unfortunately, but, frankly, unsurprisingly, the group faced racism from the very soldiers they were serving alongside. In an interview with CBS, King recalled a story where a soldier called her the n-word.

These women have been recognized numerous times since the end of the war. The Smithsonian’s National Postal Museum honored them in 1996. In 2005, a public school in Ohio was dedicated to the 6888th’s Charity Adams Earley. Most recently, in 2009, the unit was honored at an event in Arlington Cemetery where three surviving members of the battalion were present. But their profile may be elevated further with legislation put forth in March by Sen. Jerry Moran, which would give the women a Congressional Gold Medal for their efforts.

Former Army Colonel, Edna Cummings agreed that the women are deserving of this prestigious honor, telling CBS: "During a time where they were denied basic liberties as Americans, they still wanted to serve the United States."

Photo screenshotted from video in CBS article linked above.

Tags: 6888 , batallion , black women , african-american , world war 2 , world war II , history
Support Feminist Media!
During these troubling political times, independent feminist media is more vital than ever. If our bold, uncensored reporting on women’s issues is important to you, please consider making a donation of $5, $25, $50, or whatever you can afford, to protect and sustain BUST.com.
Thanks so much—we can’t spell BUST without U.