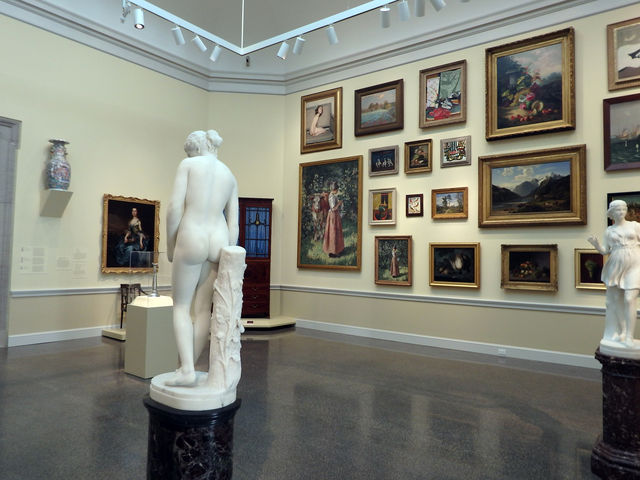 The Baltimore Museum of Art’s museum Director Christopher Bedford announced on Thursday, November 15th, that the museum will only accepting and acquiring art that have a “female - centric focus” for their permanent collection in 2020.

Bedford announced why, with: “This is how you raise awareness and shift the identity of an institution. You don’t just purchase one painting by a female artist of color and hang it on the wall next to a painting by Mark Rothko. To rectify centuries of imbalance, you have to do something radical.” According to Forbes, this isn't Beford's first time making headlines for taking a strong stance to diversify the collection. In 2018, the museum sold works by Andy Warhol and other white male artists at Sotheby’s and used the proceeds to acquire pieces by women and minorities.

The museum is not only redoing the permanent collection, but 22 of its exhibitions that’s on view will have a “female-centric focus” along with 19 that will showcase art that’s by women entirely. And these artworks will be acquired through either purchase or donation.

The museum announced in a press release that it’s to be their “2020 Vision” program, and this marks the centennial of the passage of the 19th Amendment, which amended the right for women to vote. In the press release, Bedford says that “The BMA’s 2020 Vision initiative serves to recognize the voices, narratives, and creative innovations of a range of extraordinarily talented women artists. The goal for this effort is to rebalance the scales and to acknowledge the ways in which women’s contributions still do not receive the scholarly examination, dialogue, and public acclaim that they deserve. This vision and goal are especially appropriate, given the central role women have played in shaping this museum throughout its history.”

The Baltimore Museum of Art, so it looks, has been on this path of pioneering women with having had a number of women who have directed the museum and who have had leadership positions within and amongst making decisions for the museum since it’s earliest days. However, as Bedford states that he recognizes that that’s not enough, this move is to be a radical one that’s to appropriately represent the talents and artistic creativity of women artists.

Shan Wallace who’s an artist whose photographs and collages will be exhibited in a group show in the spring, says that this “is the start of a much-needed change” and that it’s “absurd” how little there is in representation of women’s art, especially in a city where women make up 53% of the population. Wallace thinks “that what the BMA is doing will get other institutions to show more women artists” and that she’s glad that her “hometown museum is embarking on something this important.”

Hopefully this radicalism, like the purpose of the 19th Amendment, will spark a change in other museums for more of the representation by women artists.

The Garden At Midnight: Nail Art Looks Perfect For Winter

Tags: Baltimore Museum of Art , Radicalism , Art , Women Art , 2020 , Feminism
Support Feminist Media!
During these troubling political times, independent feminist media is more vital than ever. If our bold, uncensored reporting on women’s issues is important to you, please consider making a donation of $5, $25, $50, or whatever you can afford, to protect and sustain BUST.com.
Thanks so much—we can’t spell BUST without U.