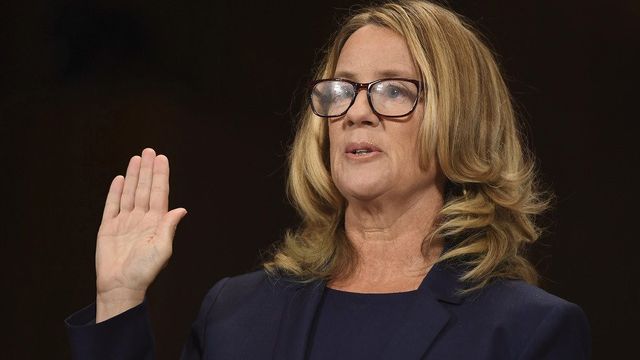 Dr. Christine Blasey Ford made a rare public appearance to accept an award from the American Civil Liberties Union (ACLU) on Sunday, Oct. 17. During her acceptance speech for the Roger Baldwin Courage Award, named after the founder of the ACLU, Ford said she’s “thankful” that sharing her experience started a larger conversation about sexual abuse.

"I'm thankful that sharing my experience prompted over 200,000 people from across our country and around the world to send messages of support. Many handwritten, sharing their own stories of assault and abuse," she said. "That's why it means so much to me not just to be recognized by you tonight, because I know you will continue the work of protecting sexual assault survivors and preventing sexual assault.”

Last year, Ford, a psychology professor at Palo Alto University in California, spoke truth to power when she came forward with sexual assault allegations against Brett Kavanaugh after his Supreme Court nomination was made public. In September 2018, she bravely shared her story by testifying in front of the Senate Judiciary Committee. Unfortunately, as we all know, Kavanaugh was still appointed to the country’s highest court. In remarks after accepting the ACLU award, she reflected on that traumatic experience, stating that, during that time, she didn’t feel “courageous.”

"I did one thing—and when I came forward last September, I did not feel courageous,” she said. “I was simply doing my duty as a citizen, providing information to the Senate that I believed would be relevant to the Supreme Court nomination process. I thought anyone in my position would, of course, do the same thing."

Ford added that while she did expect for people to dismiss her testimony, she said she wasn’t prepared for the death threats. "I understood that not everyone would welcome my information, and I was prepared for a variety of outcomes, including being dismissed," she added. "I was not prepared for the venom, the persistent attacks, the vilification, the loss of personal privacy and the collateral damage to my friends and my family. I was not prepared to be physically threatened, or be forced out of our home for over three months."

During her appearance at the ACLU of Southern California's annual Bill of Rights dinner Sunday night, she recalled Anita Hill’s testimony against Clarence Thomas in 1991. Ford also echoed the words of former NFL quarterback Colin Kapernick, who received an award at this same event two years ago and said: “We all have an obligation, no matter the risk and regardless of the reward, to stand up for fellow men and women.”

“Ambassador Yovanovitch, all of the men and women who bravely come forward, they’ve come forward to tell the truth, and to help our country,” she said. “They might also be vilified, and they need to hear our voices of support also.”

Tags: Christine Blasey Ford , Brett Kavanaugh , Anita Hill , Colin Kapernick , Marie Yovanovitch , American Civil Liberties Union , ACLU , award , sexual assault , women , feminism , news
Support Feminist Media!
During these troubling political times, independent feminist media is more vital than ever. If our bold, uncensored reporting on women’s issues is important to you, please consider making a donation of $5, $25, $50, or whatever you can afford, to protect and sustain BUST.com.
Thanks so much—we can’t spell BUST without U.