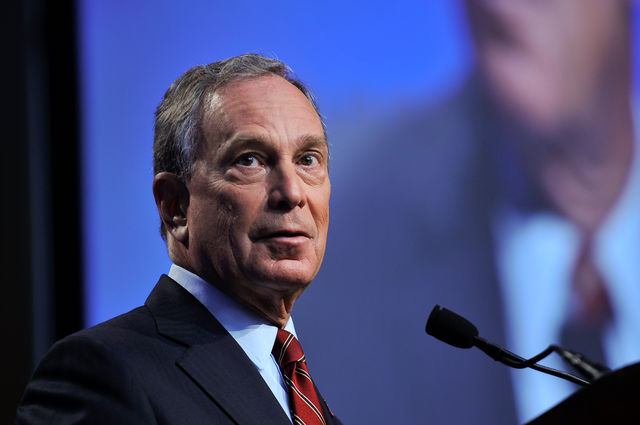 In the wake of Michael Bloomberg’s announcement to run for President, The New York Times is now pointing to the former mayor's history of sexist remarks. From saying that “if women wanted to be appreciated for their brains, they’d go to the library instead of to Bloomingdale’s” to looking a woman up and down at a party and commenting, “look at the ass on her,” Bloomberg has verbally harassed women since his days at Johns Hopkins.

According to the Times, Bloomberg was given a 32-page book of one-liners from colleagues for his birthday called “The Portable Bloomberg: The Wit and Wisdom of Michael Bloomberg” back in 1990. These statements included one of his sales pitches for his self-titled computer terminal where he said it will “do everything,” including oral sex — he mentioned that the machine "puts a lot of you girls out of business." This book came back into the spotlight during his 2001 mayoral run, but the story dwindled after the 9/11 terror attacks. He won the mayoral election three times.

But now that he’s running for President, it looks like Bloomberg’s past actions, from running a company compared to a frat house to doubting allegations of harassment against disgraced anchor Charlie Rose, could cost him the nomination. (Not that his chances are very high right now — the most recent polls have him clocking in at under 1%.) Stu Loeser, Bloomberg’s former City Hall press secretary, said that Bloomberg “believes his words have not always aligned with his values and the way he has led his life.” Hmm. Sounds about right.

Supporters of Bloomberg have pointed to his support of reproductive rights and his donations of tens of millions of dollars to organizations like Planned Parenthood. Others have also noted that Bloomberg L.P. allows 26 weeks of paid paternal leave and also offers benefits for gender reassignment surgery. But even though he’s known by some as an ally for women, there have still been lawsuits that say differently about the kind of man he is or has been. In 1997, Bloomberg was accused of telling a pregnant employee to kill her baby, even though he has denied ever saying that. A polygraph test was taken about the comment, but the results have never been released. According to New York Magazine, he once said his dating life as a divorced billionaire is “like a wet dream.” Hmm. This just keeps getting better and better!

If he were running for President at any other time in history, one might wonder if this would matter as much as it does right now. We’re living during a time where the Democratic party is checking every single word a potential candidate has said before they even fully announce that they’re running. It’s going to be even harder for any presidential candidate to run after Donald Trump, who, as we all know, has made very similar comments about women. Do Bloomberg’s derogatory comments get excused just because of the donations he’s made in support of reproductive rights and women’s issues?

Even if he has given all of that money, it doesn’t seem like women would be treated much better during a Bloomberg presidency than they were during a Trump presidency. Yes, maybe I’d be able to get a job in his Cabinet, but that may mean I’d receive jabs about my appearance every single day. I might make a mistake, and Bloomberg will tell me to spend more time at the library instead of Bloomingdale’s; I might get sexually harassed, and Bloomberg will say that the accused is innocent until proven guilty. I don’t think I want to put my faith in a president who doesn’t put his faith in women who are bravely coming out about their sexual assaults. And I don’t think this country will be interested in another president who makes that his primary belief.

Header photo courtesy of Be the Change, Inc. via Flickr Creative Commons

Tags: politics , election , bloomberg , 2020
Support Feminist Media!
During these troubling political times, independent feminist media is more vital than ever. If our bold, uncensored reporting on women’s issues is important to you, please consider making a donation of $5, $25, $50, or whatever you can afford, to protect and sustain BUST.com.
Thanks so much—we can’t spell BUST without U.