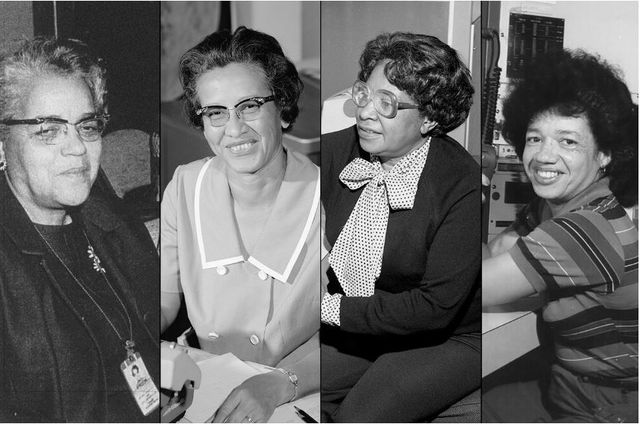 The four Black women known as “Hidden Figures” who worked at NASA during the Space Race are being honored with Congressional Gold Medals, the highest civilian award in the United States. According to a Congressional Gold Medal report, this honor is given to those who have performed “an achievement that has had an impact on American history and culture that is likely to be recognized in the recipient’s field for years to come.”

The four women, who worked at NASA's Langley Research Center in Virginia, were dubbed "human computers" for doing the complex calculations that made space travel possible. According to CNN, they played pivotal roles in World War II aircraft testing, supersonic flight research, and sending the Voyager probes to explore the solar system. They also helped land the first man on the moon in 1969.

Darden, who’s now 77 years old, started off as a data analyst at NASA's Langley Research Center before she became an aerospace engineer. She wrote over 50 articles on aeronautics design and became the first Black person of any gender to be promoted into the Senior Executive Service at Langley. Her work led to discoveries that "revolutionized aerodynamics design,” CNN reports.

For 21 years, Jackson worked as NASA's first Black female engineer before becoming the Federal Women's Program manager, where she was committed to improving "the prospects of NASA's female mathematicians, engineers, and scientists.” She passed away in 2005.

Johnson provided the space agency with calculations for numerous missions, including the first human spaceflight by an American—Alan Shepard’s Freedom 7 mission. She was also the first woman to be recognized "as an author of a report from the Flight Research Division," according to The Skanner. She is 101 years old and currently lives in Virginia.

Vaughan, an expert computer programmer, led the segregated West Area Computing unit for nine years as the first Black supervisor at the National Advisory Committee for Aeronautics (NACA), which later became NASA. She then became an expert programmer in Fortran (programming language) as part of NASA’s Analysis and Computation Division. Vaughan passed away in 2008.

The lives and careers of these four extraordinary Black women were highlighted in the book Hidden Figures: The American Dream and the Untold Story of the Black Women Mathematicians Who Helped Win the Space Race, by Margot Lee Shetterly. That book was adapted into the award-winning 2016 film Hidden Figures, starring Taraji P. Henson, Janelle Monae, and Octavia Spencer, who played the roles of Johnson, Jackson, and Vaughan, respectively. (Darden was not featured in the movie, but she was in the book.)

The Hidden Figures Congressional Gold Medal Act commends these women for their contributions to NASA's success and for paving the way for women, especially women of color, in science, technology, engineering, and mathematics. It also honors the hundreds of other women who contributed to the success of NASA during the Space Race.

"The groundbreaking accomplishments of these four women, and all of the women who contributed to the success of NASA, helped us win the space race but remained in the dark far too long," Democratic Senator and Presidential Candidate Kamala Harris, one of the people who introduced the bi-partisan bill, said in a press release. “These pioneers remain a beacon for Black women across the country, both young and old."

Today, NASA still has a long way to go before it becomes diverse. According to the space agency’s latest workforce data, 72 percent of its nearly 17,000 employees are White, 12 percent are Black or African American, 7 percent are Asian American or Pacific Islander, and 8 percent are Hispanic or Latino; one-third of NASA’s staff is female. Additionally, the all-female spacewalk that took place last month initially had to be postponed because NASA didn’t have two spacesuits that could fit the women. Despite all this, however, the journey for future women will surely be smoother because of the amazing women that came before them.

Mary Jackson is one of NASA's Hidden Figures. She was the first black female engineer at NASA. Inducted into the Langley Hall of Honor, June 1, 2017. #NASA #STEM pic.twitter.com/AbQEHHHWbe

Taraji P. Henson On Committing To Her Relationship, Ignoring Her Age, and "Seeing Her Money"

How 'Hidden Figures' Let Me See Myself

Taraji P. Henson, Janelle Monae And Octavia Spencer Are Starring In A Movie About The Black Women Who Sent The First Man To The Moon