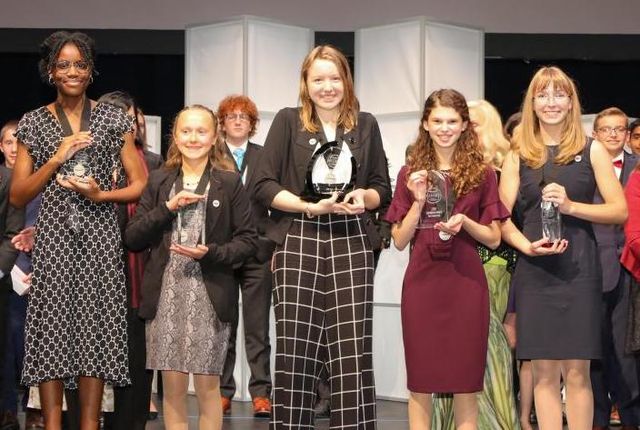 For the first time in the history of the Broadcom MASTERS National STEM Competition, all girls won the top five prizes. This is the nation’s premier science and engineering competition for middle school students, and winners were selected from a pool of 2,348 applicants from 47 states, narrowed down to 30 finalists (18 girls and 12 boys). It was also a first in the competition's history to have more female than male finalists.

The top winner, Alaina Gassler from Pennsylvania, was awarded the $25,000 Samueli Foundation Prize for demonstrating a mastery of all STEM fields. Gassler’s project was titled "Improving Automobile Safety by Removing Blind Spots." She created and worked on a project designed to decrease the number of automobile accidents by reducing blind spots.

The President and CEO of the Society for Science & the Public and Publisher for Science News, Maya Ajmera, said, “Congratulations to Alaina, whose project has the potential to decrease the number of automobile accidents by reducing blind spots”, and that “with so many challenges in our world, Alaina and her fellow Broadcom MASTERS finalists make me optimistic. I am proud to lead an organization that is inspiring so many young people, especially girls, to continue to innovate."

Rachel Bergey from Pennsylvania won the $10,000 Lemelson Award for Invention. This prize, awarded by The Lemelson Foundation, goes to an invention that promises solutions to real-world problems. Bergey developed a trap to trap an invasive species causing damage to trees in Pennsylvania. Her project was titled "Spotted Lanternflies: Stick’em or Trick’em."

Sidor Clare from Utah won the $10,000 Marconi/Samueli Award for Innovation. Clare developed bricks that could be made on Mars, so that building materials would not be required.

Lauren Ejiaga from Louisiana won the $10,000 STEM Talent Award. Her project, "Ozone Depletion: How it Affects Us," focused on how the current levels of ultraviolet light from the sun due to the ozone depletion impacts plant growth and performance.

The Broadcom MASTERS (Math, Applied Science, Technology, and Engineering for Rising Stars) is a program of the Society for Science & the Public and aim to inspire “middle school students to follow their personal passions to exciting college and career pathways in STEM."

Photo via Society for Science & the Public