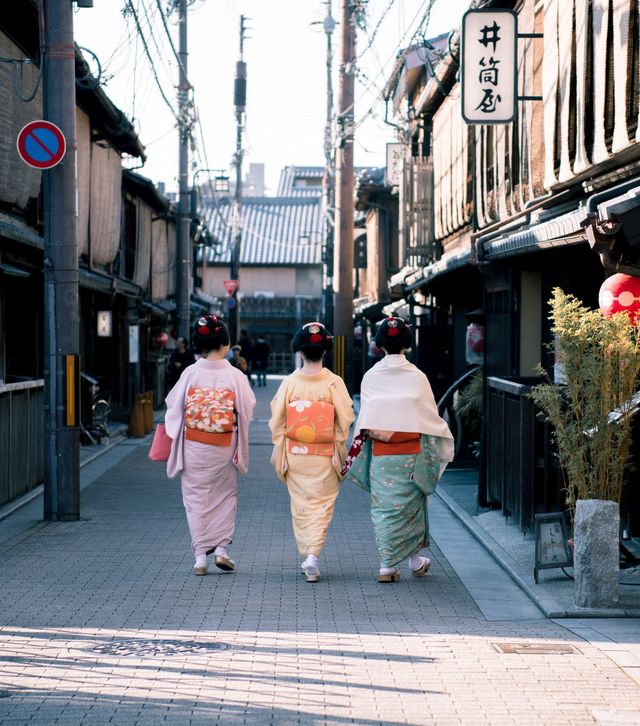 Growing complaints of harassment and property damage from foreign tourists have led authorities in Kyoto to ban photography in parts of the city’s main geisha neighborhood, The Guardian reports. Kyoto as well as other locations in Japan have seen an influx of tourism in recent years and cities are forced to come to grips with visitors treating the country like it’s their own Disneyland.

The explosion of tourism in Kyoto has resulted in visitors loitering in doorways of private residences, sitting on bamboo fences, and trespassing all for the perfect selfie.

Kyoto is also the home of Ichiriki, the 300-year-old teahouse made famous by the book and film, Memoirs of a Geisha. Hundreds of tourists flock to this landmark in the city’s Gion district but not because they’re interested in its cultural and historical significance. Most are there for the sole purpose of taking a gander and photo of the geiko and maiko, or "qualified" and "trainee" geisha. One resident told The Guardian:

“The problem is that everyone thinks of Kyoto as their own private photo studio. I’ve seen maiko bursting into tears and fending off people who want to have their photo taken with them. They are not on display. This is a live, working environment."

A survey of 300 restaurants and shops in the area showed complaints ranging from littering and smoking while walking, to blocking traffic and trespassing, to even carrying geiko and maiko and chasing them down the street for a photograph.

The ban includes a fine of up to 10,000 yen, or $91.62, and the local ward has put up signs, telling visitors not to take pictures, near streets off of Hanamikoji, a main road. While the ban and fine are not legally binding, local businesses hope that setting this boundary will remind tourists to show more respect to the neighborhood and its residents. The city council is also distributing bookmarks and stickers with reminders, written in English and Chinese, about appropriate behavior.

Yet, current signs with messages about etiquette have gone unacknowledged by tourists. Residents say the number of visitors has caused overcrowding in buses and restaurants as well as an overall commotion that ruins the city’s miyabi, in other words, the refined and peaceful atmosphere that initially attracts people to Kyoto. A new project being run through early December, aims to stop the problem where it started, via smartphone. Tourists will be asked to mind their Ps and Qs through an app that will dispatch a message in Chinese and English, requesting that they not take pictures of geiko and maiko without consent and touch private property, as soon as they come within about half a mile of Gion.

With next summer’s Tokyo Olympics, Japan’s tourism boom is expected to continue long after the international sporting event. Hopefully Kyoto’s recent ban will remind tourists that the country is not their own personal Instagram backdrop and geishas are not characters at an amusement park.

12 Women And Non-Binary Asian Americans You Should Know About