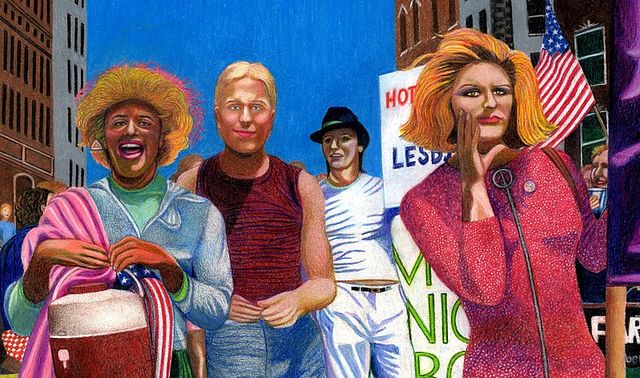 A new lesbian, gay, and bisexual organization has been facing ongoing criticism since its launch almost two weeks ago in London. Named the “LGB Alliance,” this group aims to focus specifically on the rights of LGB people while decidedly leaving out transgender and non-binary individuals.

According to Out, the organization launched Oct. 22, with “gender critical feminist” and criminal defense lawyer Allison Bailey calling it a “historic moment for the Lesbian, Gay and Bisexual movement.” In the same tweet, she then urged people to “spread the word” as “gender extremism is about to meet its match.”

As of today, the LGB Alliance Twitter page has accumulated a growing following of more 9,000 and describes itself as: “Asserting the right of lesbians, bisexuals and gay men to define themselves as same-sex attracted. Gender is a social construct.” The group’s Twitter page also asserts that “sex is a binary, not a spectrum,” even though scientific evidence proves otherwise.

Bev Jackson, a spokesperson for the group and an original co-founder of the Gay Liberation Front, has said that the group “focuses on sexual orientation… because lesbians in particular, and recently gay men too, are suffering from the confusion between sex and gender.” According to Dazed, Jackson claims that trans people are welcome to the LGB Alliance—and apparently, they were welcomed in its first meeting—but it’s hard to understand why any trans or non-binary person would want to join and actively participate in a group whose message clearly excludes them.

Since the news of the organization’s formation, countless members of the LGBTQ+ community have come together online to condemn the group by using #LGBTQFamily and #myLGBTFamily. And while the LGB Alliance has recently claimed that it’s not anti-trans, many people have argued otherwise by pointing out numerous facts: that the group has reportedly unified with anti-trans hate group Woman’s Place UK; that some of the group’s founding members cite extremely transphobic right-wing media; and that the group has already seen support from notorious TERFs and anti-trans figures in media (such as The Times journalist Janice Turner, who has referred to trans people as a “cult”), among many others. More importantly, LGBTQ+ media have been quick to note that the creation of this LGB Alliance blatantly disrespects the significant role that transgender and self-identified transsexual people (like Sylvia Rivera and Marsha P. Johnson) played within the gay liberation movement—more specifically, the Stonewall Riots.

The Stonewall Riots were a series of protests organized by members of the LGBTQ+ community against a police raid in Manhattan that started June 28, 1969. These well-known riots are what sparked the formation of many LGB rights groups in numerous American cities and around the world, including England (where the LGB Alliance is based). Additionally, the commemoration of the Riots on Christopher Street Liberation Day are what later grew into the World Gay Pride events that are now celebrated annually in June. Trans women of color such as Sylvia Rivera and Marsha P. Johnson were at the forefront of this important event and catalyst for the creation of even more LGB organizations and events. Trans people, many of whom also identify as lesbian, gay, or bisexual, are at the core of U.S. queer history.

Therefore, the LGB Alliance’s mere existence suggests that transgender activism isn’t heavily linked to gay liberation (when, in fact, it is), and it disregards the many times that gay, lesbian, bisexual, and trans people have stood in solidarity with each other to fight against systematic oppression.

The creation of this alliance group also seems to assert the importance of focusing solely on LGB rights and the need for LGB-oriented spaces. Yet, startling statistics about increasing anti-transgender rhetoric and violence shows that there is actually an even greater need for safe spaces and organizations that welcome and help advocate for transgender and non-binary people and their rights.

Additionally, in 2018, trans advocates reportedly tracked at least 26 deaths of transgender or non-binary people in the U.S. due to fatal violence, the majority of whom were Black transgender women; 2019 has already seen at least 22 transgender or genderqueer people fatally shot or killed by other violent means. As the Human Rights Campaign has stated, “it is clear that fatal violence disproportionately affects transgender women of color, and that the intersections of racism, sexism, homophobia and transphobia conspire to deprive them of employment, housing, healthcare and other necessities, barriers that make them vulnerable.”

Some people have suggested the formation of a “T Alliance” to work jointly with the LGB Alliance. But others think that rather than splitting the LGBTQ+ family and acting as if trans/non-binary rights are “too” different and should be treated separately, they believe the greater community should form more inclusive organizations and work collectively to help each other—the same way they have a number of times throughout history.

"Back in those days, LGB did not really care much about the T part,” prominent trans activist Judy Bowen, who also helped lead the Stonewall Riots, told Vice. “Because we were too loud, and basically, we weren’t welcome at their meetings. Hasn’t changed much, either."

Tags: LGB Alliance , gay liberation movement , transgender activism , Stonewall Riots , Sylvia Rivera , Marsha P. Johnson , Judy Bowen , LGBTQ history
Support Feminist Media!
During these troubling political times, independent feminist media is more vital than ever. If our bold, uncensored reporting on women’s issues is important to you, please consider making a donation of $5, $25, $50, or whatever you can afford, to protect and sustain BUST.com.
Thanks so much—we can’t spell BUST without U.