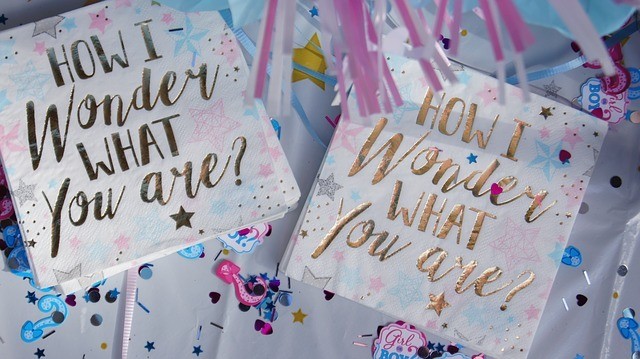 Like most traditions, it started with a cake. When Jenna Karvunidis was expecting her first child in 2008, she baked a cake with pink icing on the inside that would reveal to her friends and family that she would soon be the mother of a baby girl. Karvunidis wrote about the gathering on her blog as well as a parenting forum and the idea went viral. Her newly-acquired viral fame led to interviews on popular parenting websites and, over the past decade, has inspired a growing number of expectant parents across the internet to craft elaborate gender reveal spectacles to share on all social media platforms.

The impending arrival of a new family member is an exciting cause for celebration whether that be with a cake that includes pink or blue frosting; gift boxes filled with pink or blue balloons; or maybe a homemade appliance, intended to shoot pink or blue powder into the air, but ends up being a pipe bomb killing another family member. This is what happened to 56-year-old Pamela Kreimeyer, who was standing 45 feet away from the gender reveal apparatus and was struck in the head with a piece of metal after the device exploded, sending shreds of debris into the air, BBC News reports.

This is not the first gender-reveal party that’s had tragic results. In 2017, a gender-reveal celebration in Arizona started a wildfire that destroyed nearly 47,000 acres and caused over $8 million in damages. In 2018, an Australian man doing a burnout in his car with the tires emitting blue smoke, as part of a gender reveal, almost died from being trapped inside the burning vehicle. Gender reveals are not the only instances where people have risked their lives in hopes for a viral video. But, when did viral fame become so infused within the family structure? And what are families really celebrating with these gender reveals?

In an article for NBC, Erika Nicole Kendall mentioned that the “overwhelming majority” of gender-reveals on the internet include “two parents: one man and one woman.” “It’s much more rare to see ones for those going it solo or for nonheterosexual, married couples; they simply don’t receive the same level of prominence, as if their new additions don’t deserve the same sort of over-the-top celebration,” she continued. Karvunidis, who once wrote another blog post defending gender reveal parties, now has a new outlook on the trend. When someone on Twitter referred to her as the inventor of gender reveals, Karvunidis, now a mom of 3, told BuzzFeed News that she “felt the need to write a bigger post with an updated family picture.”

Her oldest daughter, whose gender reveal launched thousands of aspiring viral videos, is now 10 and expressing her identity in nonbinary ways. “As for gender in general, I’m taking my daughter’s lead,” Karvunidis told Buzzfeed News. In the Facebook post addressing the Twitter comment, Karvunidis expressed “a lot of mixed feelings” about her “random contribution to the culture.” “Who cares what gender the baby is?” She continued, “I did at the time because we didn’t live in 2019 and didn’t know what we know now—that assigning focus on gender at birth leaves out so much of their potential and talents that have nothing to do with what’s between their legs.”

On that account, what gender-reveal parties actually reveal is that people still do not understand the difference between sex and gender. Sex pertains to genitalia. Gender to performance. Therefore, as Kendall concludes, “a gender reveal party isn’t about gender at all—it’s celebrating the knowing of the sex,” and it “starts feeling less and less about the expected arrival of a baby and far more about the parents pledging a public allegiance to gender norms that have been questionable at best and life-ending at worst.”

The Repackaging Of Always Pads Has Apparently Upset Some Transphobic “Feminists”

Tags: gender reveal party , sex , gender , presentation , social media
Support Feminist Media!
During these troubling political times, independent feminist media is more vital than ever. If our bold, uncensored reporting on women’s issues is important to you, please consider making a donation of $5, $25, $50, or whatever you can afford, to protect and sustain BUST.com.
Thanks so much—we can’t spell BUST without U.