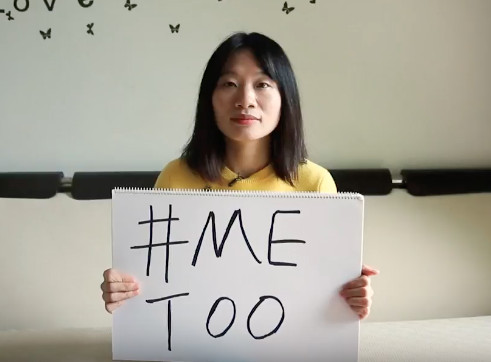 China’s pioneering #MeToo activist Huang Xueqin, also known as Sophie Huang, has been detained by authorities in Guangzhou after joining the protests in Hong Kong. Her friends have also stated the police confiscated her passport to prevent Huang from leaving the country. She was last seen around October 17.

Huang released an article over the summer reflecting on her thoughts and experiences witnessing the ongoing protests in opposition to the extradition of the Fugitive Offenders Ordinance issued by the government. In the article, Huang spoke of the resiliency she saw in the protestors she witnessed in the streets:

This is not the first time Huang has made headlines. The feminist journalist came out publicly to speak about her experience with sexual harassment when she worked as young intern for a national news agency in China. She was inspired to open a social dialogue about workplace harassment, mainly by the American #MeToo movement that reached its peak when a number of Hollywood actresses came forward to report sexual misconduct allegations against mega movie producer and human pus-ball, Harvey Weinstein. However, the movement did not make as large of a cultural wave there as it did here in the States.

China’s response to Huang and the women who rallied behind her was practically silent. Because of the government's censorship of news and media, the conversation did not receive the large scale attention it deserved. This form of erasure of female voices in the Chinese press has shown why women feel reluctant to report these incidents to authorities. In an interview with CNN, Huang said, "There are so few people prosecuted because there are only so few victims who report… [to] most victims, it's a shame. They fear reputation damage and they want privacy." In an online survey Huang conducted in 2018, 87.3% of female journalists in the nation had been subjected to some form of sexual misconduct in the workplace.

It seems like an unusual coincidence that the authorities would not take a particular interest in Huang because of her political activism with the #MeToo movement as well as her support for the ongoing protests in Hong Kong. The Guangzhou authorities have yet to give a clear motive for detaining her. No matter how long they keep Huang in custody, they can’t suppress her voice or the voices of women in China forever. We pledge to stand with them.

Tags: Huang Xueqin , Hong Kong protests , #MeToo , feminist , sexual harassment
Support Feminist Media!
During these troubling political times, independent feminist media is more vital than ever. If our bold, uncensored reporting on women’s issues is important to you, please consider making a donation of $5, $25, $50, or whatever you can afford, to protect and sustain BUST.com.
Thanks so much—we can’t spell BUST without U.