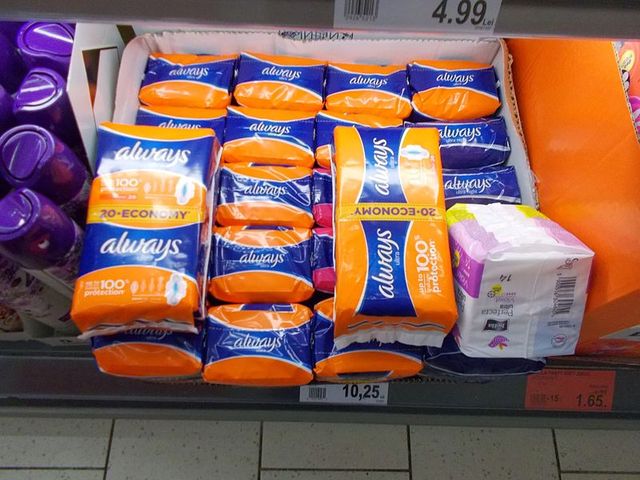 Always is officially getting a new look. The brand’s parent company, Procter & Gamble, announced this week that it will remove the female Venus symbol from its pad packaging to be more inclusive of non-binary, transgender, and intersex people who use their products.

Since Trans Visibility Day in March, trans and non-binary activists have continually urged the company to be more considerate of them by removing the Venus symbol, which has been historically synonymous with the female sex. In a statement to trans activist Ben Saunders on Twitter, Always responded to their pleas: “We are glad to inform you that as of December we will use a wrapper design without the feminine symbol. We are absolutely grateful for having people like you voicing their opinions.”

Hey @Always since today is #TransVisibilityDay it’s probably important to point out the fact that this new packaging isn’t trans* friendly. Just a reminder that Menstruation does not equal Female. Maybe rethink this new look. pic.twitter.com/1Fp8bdB6qY

hi @Always i understand that you guys love girl positivity but please understand that there are trans men that get periods, and if you could please do something about the ♀️symbol on your pad packaging, i’d be happy. i’d hate to have any trans males feel dysphoric.

While the majority of transmen and non-binary people are celebrating the news, some transphobic ciswomen, who actually call themselves “feminists,” are upset and now calling to boycott the maxi-pad company. One of these women are Julie Bindel, who said the removal of the Venus symbol from the packaging marks the beginning of “the total elimination of women’s biology.”

“The women’s symbol has been used by feminists for decades,” Bindel told the Daily Mail. “This is pure cowardice and virtue-signaling from these big corporate brands who are capitulating to the trans agenda.”

Mayhem Miller also had something to say. In a now-deleted Facebook post, the RuPaul’s Drag Race alum said she thinks the push for more gender-inclusive pad design is “absolutely ridiculous” and that “at some point the community should consider what battles are more important.”

Many supporters of the Always company rebranding decision have been quick to point out numerous facts: (1) that ciswomen aren’t the only ones who menstruate; (2) not every woman wants a hyper-feminine period product to constantly remind them of their gender; and, more obviously, (3) that removing the Venus symbol doesn’t make the product defective or non-functioning.

Some trans men/non binary people menstruate. As do cis women who despise overly feminine products. Cis women who can’t menstruate and trans women are harmed by the assumption that menstruation defines femininity. Less ink for printing better for planet. This is a win all around.

Additionally, trans activist, model, and entrepreneur Kenny Ethan Jones highlights that the female symbol removal doesn’t deny the existence of women nor attempt to erase them, as Bindel and other TERFs have claimed. Instead, it removes “some of the discomfort and stigma associated around trans, non-binary and intersex individuals who have to buy and use these products.”

“My biggest concern is that gendering products forces people to continue living up to the expectations of gender roles, which they may not feel are applicable to them,” Jones wrote in an article for Metro. “Some men are flamboyant, some women are masculine, and that’s simply who they are. Not everyone who gets a period is a woman, and not every woman gets a period, so we need to stop hinging ‘femininity’ on menstruation.”

Meanwhile, other supporters have been critical of the pad company’s decision, questioning whether or not Procter & Gamble actually cares about the trans community, or if this is all just a marketing gimmick to make the company seem “woke” so it can profit off of marginalized communities.

People have also pointed out other ongoing unaddressed issues, such as the “pink tax,” a fee that women are charged for everyday items (including hygiene products), and the poor quality pads that Always is still selling to other countries. (According to Teen Vogue, women in parts of Africa are currently using #MyAlwaysExperience and alleging they experience “itching, burning, and rashes” when they use the brand’s products.)

Procter & Gamble has asserted that it is “committed to diversity & inclusion and are on a continual journey to understand the needs of all of our consumers.”

“We routinely assess our products, packaging, and designs," P&G said in a statement to CNN. "We take into account a broad array of factors, including feedback from consumers, to ensure we are meeting the needs of everyone who uses our products. The change to our pad wrapper design is consistent with that practice, and will be adapted by multiple markets at various dates."

The gender-neutral pads will reportedly hit stores sometime in early 2020.

Tags: Always , Procter & Gamble , Venus symbol , pads , period products , gender-inclusive , non-binary , transgender , intersex , TERFs , transphobia , news , feminism
Support Feminist Media!
During these troubling political times, independent feminist media is more vital than ever. If our bold, uncensored reporting on women’s issues is important to you, please consider making a donation of $5, $25, $50, or whatever you can afford, to protect and sustain BUST.com.
Thanks so much—we can’t spell BUST without U.