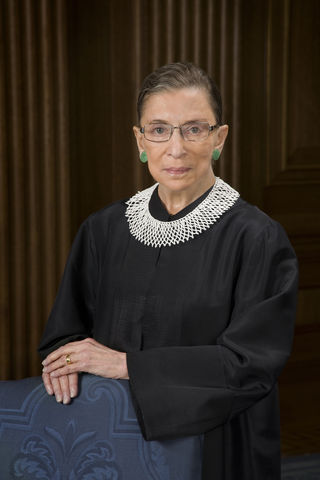 Justice Ruth Bader Ginsburg just won the Berggruen Prize for Culture and Philosophy. The annual $1 million award is granted to those who make "major achievements in advancing ideas that shape the world."

Known for her contributions to civil rights and gender equality, Ginsburg co-founded the Women’s Rights Project at the American Civil Liberties Union (ACLU). She served as the ACLU’s General Counsel from 1973 to 1980 and on the National Board of Directors from 1974 to 1980. In 1980, she was appointed a Judge of the United States Court of Appeals for the District of Columbia Circuit. She co-authored the first law school textbook on sex-based discrimination. More recently, she has been the subject of two critically-acclaimed films: the documentary RBG and the biopic On the Basis of Sex. A collection of her writings, entitled My Own Words, was published in 2016.

Nicolas Berggruen, who founded the Berggruen Institute, said she was chosen from a group of 500 who were nominated for the prize that had been then narrowed down to five finalists. As chairman, he wrote in a statement that “by grit and determination, brains, courage, compassion and a fiery commitment to justice, Ruth Bader Ginsburg rose from modest beginnings to become one of the most respected, and most beloved, jurists of our time."

Berggruen in an interview said that Ginsburg “was not the traditional philosopher” that had been chosen in the past. Kwame Anthony Appiah, chair of the jury for the prize, and a professor of philosophy and law at New York University said that “few in our era have done more to bring vital philosophical ideas to fruition in practical affairs than Ruth Bader Ginsburg. She has been both a visionary and a strategic leader in securing equality, fairness, and the rule of law not only in the realm of theory, but in social institutions and the lives of individuals.”

The beloved Notorious RBG will be presented the award December 16 at the New York Public Library at a private event.

Nancy Pelosi Had The Most Beautiful Response To Trump's "Meltdown" Comment

Tags: Ruth Bader Ginsburg , RBG , Berggruen Prize , Berggruen Institute , Politics , Feminism , History
Support Feminist Media!
During these troubling political times, independent feminist media is more vital than ever. If our bold, uncensored reporting on women’s issues is important to you, please consider making a donation of $5, $25, $50, or whatever you can afford, to protect and sustain BUST.com.
Thanks so much—we can’t spell BUST without U.