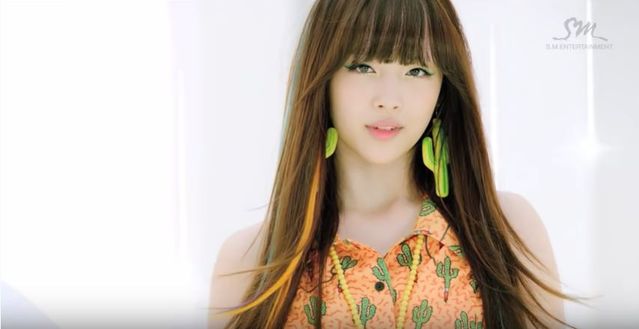 On Monday, K-pop star Sulli passed away. According to several news reports, the 25-year-old wasn’t responding to calls from her manager, who subsequently found her dead in her home. Police are still investigating, but based on statements from acquaintances who revealed she had severe depression, they believe it is likely she died by suicide.

Sulli, whose real name is Choi Jin-ri, signed with SM Entertainment, one of South Korea’s largest entertainment companies, as a child actor in 2005 before making her singing debut with girl group f(x) in 2009. Throughout the entirety of her idol career, she had a controversial reputation for being outspoken about “taboo” issues and for having feminist views.

While many American female artists do experience misogynistic criticism for their fashion choices and political opinions, South Korea’s pervasive mental health stigma and intensely strict K-pop industry standards create a culture in which female idols like Sulli are subject to daily policing over nearly everything they do. The conservative Korean public and media constantly attacked Sulli for a variety of things—from posting selfies with “revealing” clothing, to openly supporting the country’s newly-revised abortion law. It got to a point where it didn’t matter what she said or did; she was regularly criticized just for existing and being herself.

When the constant criticism and bullying became too much for her, she took a break from f(x). But after a one-year hiatus, Sulli eventually decided to leave the girl group for good to focus on a solo singing and acting career. Even then, the public scrutiny didn’t stop. She was primarily targeted for her refusal to conform to social norms. Her main “controversies” included going braless in public and on social media (she actively supported the “no-bra” movement), live-streaming a drinking session with friends, and revealing that she was in a relationship at the height of her singing career, which, as The Guardian points out, goes against “the industry’s carefully crafted image of young female stars as sexually desirable but inexperienced.” She received a flood of crude, slut-shaming comments and insults, as well, for not being discreet about her relationship and sexuality.

Sulli was also transparent about her mental health struggles—yet another taboo in South Korea, a country with a “strong cultural resistance to discussing mental illnesses,” as per The Guardian. Rather than staying quiet about the online abuse she was receiving, Sulli continually spoke up about the constant bullying and how it affected her.

“When I met people in the past, even before saying hello, I felt like I should explain myself: This isn’t who I am! The rumors aren’t true!” she said recently on a Korean television show she co-hosted called The Night of Hate Comments, where she nonchalantly read hate messages about herself and talked about other controversial incidents.

But despite seeming relatively calm and unaffected, she mentioned how the online abuse has contributed to her anxiety disorders.

“My life is actually empty, so I feel like I’m lying to everyone by pretending to be happy on the outside,” she said on the show, mentioning that she continued to pretend to be happy to “simply live a two-sided life.” On social media, there were also plenty of warning signals; in a recent Instagram video, she addressed her online bullies directly. “I’m not a bad person. Why are you talking bad about me?" she asked. "Tell me one thing I did to deserve this.”

In the wake of Sulli’s death, there has been a massive surge of support from grief-stricken fans, many of whom recently submitted several online petitions, all demanding tighter rules against cyber-bullying. K-pop media outlets, like Koreaboo and Allkpop, have also covered Sulli’s death and made suicide prevention posts on social media.

While this display of support for Sulli is nice and important, a lot of it seems insincere and hypocritical. Where was all this love and support when she was alive and actively speaking out about her own suffering? Also, as Popdust highlights, how can K-pop celebrity gossip websites like Koreaboo or Allkpop “act like suicide is a tragedy and mental health issues need to be taken seriously when they've directly contributed to the denigration of those same people, time and time again?” All of the negative criticism from toxic Korean media and anti-fans has suddenly been replaced by either painful silence or raging support.

I also can’t help but think of Jonghyun, a fellow K-pop idol and labelmate whom Sulli was close friends with.

Even though the well-known member of boy group SHINee (also from SM Entertainment) wasn’t subject to criticism and bullying in the way Sulli was, he still struggled with severe mental issues and clearly lacked the support he needed within the often suffocating constraints of the K-pop industry. When Jonghyun died by suicide in December 2017, the public, fans, and media outlets all responded in practically the same way they currently are for Sulli—by posting a sea of sympathetic comments online, publishing article after article related to suicide prevention and/or mental health awareness, demanding for change and more support for idols from then onwards.

And yet, after a few weeks passed, the cries of public support for Jonghyun quickly slowed down and have nearly vanished. In a lot of ways, it was almost as if some people were ashamed of the fact that such a successful, talented artist like Jonghyun actually had a debilitating mental illness that led to him taking his own life (thus, perpetuating the mental health stigma in South Korea by not actively addressing the clear elephant in the room).

So, again, this begs the question: If Sulli were still alive, would anyone be talking about her and the way she was continually mistreated?

How many more wake-up calls do people need to fully learn and realize that K-pop idols are human beings too, and what we say and post on the internet about them does matter and can be harmful? Why does someone need to die in order for some fans to care and start talking about depression, mental health, cyber-bullying, misogyny, toxic K-pop celebrity and fandom culture, and more? It’s disheartening to see how little people have learned from Jonghyun’s death, and now probably Sulli’s.

I can't help but wonder what support from entertainment companies and management agencies, if any, is actually being provided to K-pop idols who are struggling with depression and other mental illnesses, especially after these recent tragedies. Because no matter how much genuine love and positivity fans may send to their beloved idols, it's been proven time and time again that all of that clearly (and unfortunately) isn't enough. And yet, it's all that we can do as supporters to show that we care about the people (not just idols) who often make our days a little better just by existing. I’m sure Sulli did that for many of her fans.

Tags: Sulli , Jonghyun , K-pop , South Korea , death , suicide , suicide prevention , cyber-bullying , toxic celebrity culture , depression , mental health , mental health awareness , hypocrisy , feminism
Support Feminist Media!
During these troubling political times, independent feminist media is more vital than ever. If our bold, uncensored reporting on women’s issues is important to you, please consider making a donation of $5, $25, $50, or whatever you can afford, to protect and sustain BUST.com.
Thanks so much—we can’t spell BUST without U.