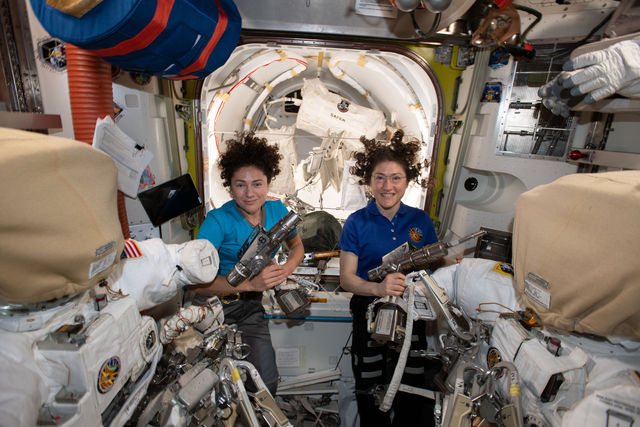 Prepare to nerd out! For the first time in NASA’s history, an all-female spacewalk took place this morning. Flight engineers Christina Koch and Jessica Meir were the power duo who journeyed out into space together at 7:50am EDT this morning in the first of a series of trips to replace and repair a failed power controller, also known as the battery charge-discharge unit (BCDU), on the exterior of the International Space Station.

The historic spacewalk was meant to happen this past March, but the mission was cancelled after the program failed to make two properly sized spacesuits in time for Koch and fellow NASA astronaut Anne McClain. The agency faced major backlash for the lack of inclusivity in their space gear, especially for their female engineers. Their response was to begin working on a new line of body inclusive spacesuits for their 2024 Artemis lunar exploration program, where they plan to put their first female astronaut on the moon.

This moment has been a long time coming for women in the space program. To put this into context, only 15 women have ever been on a spacewalk and, before today, they had all been accompanied by male astronauts. The number of female astronauts in the agency has increased significantly in recent years. Koch and Meir’s 2013 class, for example, graduated into the program with 50 percent of the astronaut candidates being female. This is a considerable sign of progress, since just two years ago it was reported only 15% of NASA’s planetary mission teams were women.

The agency plans to do more to encourage young women to enter STEM fields. In an interview, Koch said of the importance of this mission, “In the past, women haven’t always been at the table. It’s wonderful to be contributing to the space program at a time when all contributions are being accepted, when everyone has a role. That can lead in turn to increased chance for success. There are a lot of people who derive motivation from inspiring stories of people who look like them, and I think it’s an important story to tell.” We can’t wait to see the diversity of astronauts increase in the missions to come. First the moon, then the world!

Space Crimes Are A Thing Now? And This Woman Is The First Alleged Perp

Tags: NASA , STEM , Women in STEM , astronauts , spacewalk , Christina Koch , Jessica Meir , science
Support Feminist Media!
During these troubling political times, independent feminist media is more vital than ever. If our bold, uncensored reporting on women’s issues is important to you, please consider making a donation of $5, $25, $50, or whatever you can afford, to protect and sustain BUST.com.
Thanks so much—we can’t spell BUST without U.