Nancy Pelosi Had The Most Beautiful Response To Trump's "Meltdown" Comment 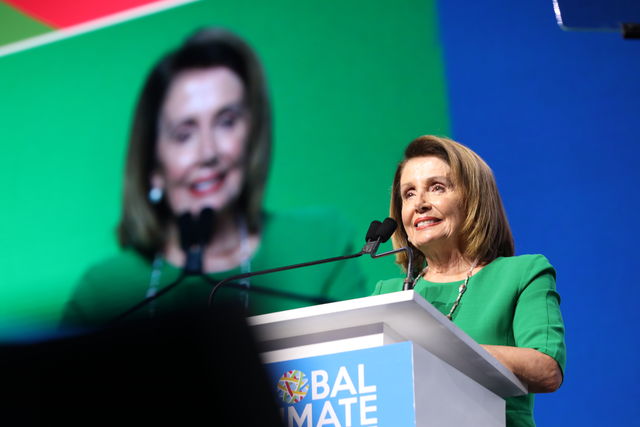 Speaker of the House Nancy Pelosi defeated Donald Trump once again during a meeting concerning Trump’s choice to pull troops out of northern Syria. His decision to do this leaves Kurdish soldiers unprotected from Turkey without the allied help of the United States. According to The Washington Post, Trump called Pelosi a “third-rate politician.” When she asked him what the plan was for fighting ISIS now that he has made this unintelligent decision, Trump said that his plan was to keep the American people safe. Pelosi replied, “That’s not a plan. That’s a goal.” (Incredible.)

As all of the social media platforms have seen by now, Trump tweeted a photo of Nancy Pelosi standing up during that meeting of all men with the caption, “Nervous Nancy's unhinged meltdown!” And how did our Speaker respond? Oh, she didn't do much—just made that photo her Twitter cover photo. When asked at a press conference this morning about what she said as she stood up, Pelosi replied, “At that moment I was probably saying all roads lead to Putin.” Right after, she excused herself from the room.

If anyone was having a meltdown, it was the person who immediately went to Twitter to talk shit. At the press conference, Pelosi mentioned that “it would be interesting to have a recording of what goes on in those meetings,” further saying that there would be no fidelity to fact. Then, it would be proven to everyone that Trump is right; someone is having a meltdown. It’s too bad he wasn’t talking about himself. He was so close to being right for once! Also, @RealDonaldTrump, what are we even doing awake between 1 am and 4 am tweeting up a storm all the time? If I have learned anything from being a dramatic teenager/young adult, it's that those hours are the peak time for meltdowns. I think there’s something you’re not telling us. Actually, I think there is quite a handful of things you’re not telling us.

The last time Pelosi gave us a moment this iconic was when she applauded during Trump’s State of the Union address. In the photo taken from that, she perhaps unintentionally looked like the applause was sarcastic—a slow-clap, good-for-you sort of applause. According to her, that is not what it was, but that’s okay; we can still take that one.

The sad aspect of this photo is that it highlights there was only one woman in the room. But it remains constantly inspiring to see leaders like Nancy Pelosi, Alexandria Ocasio-Cortez, and Ilhan Omar standing up to people like Donald Trump: women are able to stand up for what's true and right in a meeting or a group setting, even when they are outnumbered 15-1. Although that’s exciting, the one woman in the room will get called crazy or be told they’re having a meltdown almost every time. I don’t need a statistic for that; it all comes from experience, baby.

The important thing to understand here is that if Donald Trump is sitting in the most powerful seat in the country and is tweeting memes about meetings that can decide the fate of American soldiers he is supposed to be protecting, maybe Nancy Pelosi walking out of the said meeting isn’t too irresponsible. As President, he’s not supposed to need a mom to tell him he’s acting like a child.