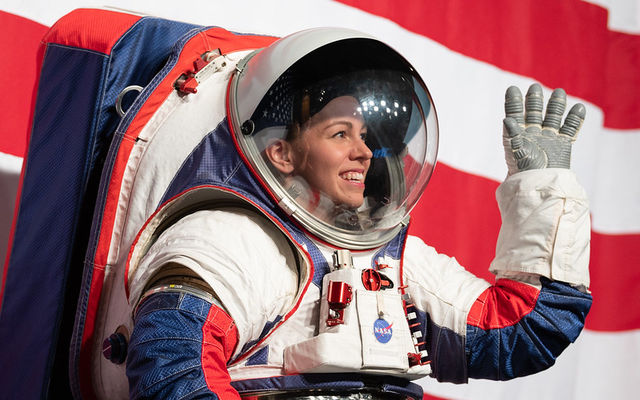 In March 2019, astronauts Anne McClain and Christina Koch were about to make history and perform the first all-female spacewalk outside of the International Space Station. But there was a hitch: NASA had not made enough suits that would fit both of the women, and therefore had to cancel the spacewalk.

Now, NASA has announced that they will be creating more body-inclusive suits for the 2024 Artemis mission, where the first woman is expected to walk on the moon. The suit will be more flexible and easier to take on and off. NASA administrator Jim Bridenstine says that the suit is designed for everyone, "from the first percentile of women to the 99th percentile of men." The solution was to introduce "modular components across the waist and chest," which can be individually adjusted for a better fit.

Bridenstine also announced on Twitter that an all-female spacewalk will take place in the next few days, with Koch and Jessica Meir changing a faulty battery unit.

.@Space_Station update: our first all-female spacewalk with @Astro_Christina and @Astro_Jessica will be Thursday or Friday to replace a faulty battery charge-discharge unit. We’ll have a telecon later today. More details: https://t.co/0T6OOfuQQc pic.twitter.com/zQ7cH4fIBg

The spacesuit debacle is a stark reminder that in all levels of life, the world is largely not built for women/nonbinary folks. Women are 47% more likely to be injured in a car crash, as "cars have been designed using car crash-test dummies based on the "average" male." According to the Guardian, "the most commonly used dummy is 1.77m tall and weighs 76kg (significantly taller and heavier than an average woman); the dummy also has male muscle-mass proportions and a male spinal column."

Bias extends to the medical community, as well. Medical bias along racial and gender lines has led to many a misdiagnosis, and in some cases, can even be fatal. For example, heart attack symptoms in women often present themselves differently than in men, and because of this, women are half as likely to receive the recommended medical treatment. Women also only make up one-third of participants in clinical trials. When most studies and surveys use men as their "neutral," those results will not be a wholly accurate understanding of the myriad ways someone could experience a drug or disease. One infamous 1986 study about breast and uterine cancer famously only used men as its subjects.

If the world wasn't built for women, then outer space certainly should be. Keep your eyes peeled for the historic spacewalk in the next couple days.

Space Crimes Are A Thing Now? And This Woman Is The First Alleged Perp