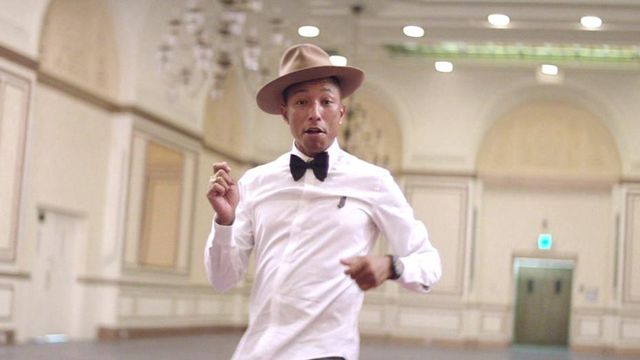 On Monday, GQ published their New Masculinity issue with prolific record producer and proud Black nerd Pharrell Williams as their cover star. Williams was interviewed by the new editor-in-chief of the men’s lifestyle magazine, Will Welch.

Aside from the actual conversation that takes place between the two men, Welch’s description of his day shadowing the rapper sounds like something out of some bizarro Parisian Anime-inspired Great Gatsby adaptation Kubrick dreamed up but never had the budget to make. Williams might very well have it, though. He’s living in a futuristic fantasy of his own creation.

The article upholds Williams as a genderfluid fashion king who dared to wear pink back when no man was brave enough to do so without the threat of being ridiculed for looking too feminine. It is true that Williams was one of the first Black men in hip-hop to dress in the way he did: ideas of masculinity in the Black community at the beginning of Williams’s career were extremely strict. To wear a bright color or wear clothes made by designers who typically marketed to cis women was dangerous. In many ways, this stifling gender binary still keeps many Black men in fear of expressing themselves through clothing. To see a star as big as Pharrell so comfortable in his geekiness allowed many young Black men to begin exploring their gender expression in new ways they had never imagined before, and for that, I will give him credit. Williams’s gender-bending fashion is not without its limits, though. The man who rocked pastel polos and a purple crocodile Birkin handbag in the 2000s admits he would never wear a skirt or a blouse. “That's not my deal,” he says. The extent of his advocacy ends with his own high-end wardrobe.

Williams makes it clear in the interview that he believes we are in a spiritual war. I don’t disagree with him. What I’m skeptical of, however, is what he believes this war is about and who the parties involved in this ideological battle are exactly. Williams says that by following men (as in literally following them on social media) instead of following God, we are participating in this spiritual war against each other. He awkwardly uses the inner struggle of a hypothetical trans person as an example for his argument. “What is happening to a transgender person? What are they going through? They feel like their body is not connected to their spirit. And what kind of toxic environment do we live in that they have to justify how they feel? That must feel incredibly insane. That is spiritual warfare.” Welch did not press Williams further on what gender he believed God conforms to, but I’ll take the hint.

Though he claims in the article he cannot claim to know the plights of others, Williams doesn’t seem to realize the problematic way in which he speaks for marginalized communities he does not belong to. Even in his own work, he is channeling a queer and feminine energy that he does not possess. He has recently launched a pseudo-feminist campaign to promote his new unisex sneaker collection with Adidas using the tagline “Now Is Her Time.” The ad features a diverse group of prominent female/femme activists and artists like Syd from the band The Internet and Patrisse Cullors, co-founder of the Black Lives Matter movement. For a major brand like Adidas to feature such dynamic trailblazers as these is inspiring to see, but it all feels too good to be true. Especially since the video many people remember Williams for was anything but empowering for women.

The scandal that came after the release of "Blurred Lines," Williams’s controversial 2013 collaboration with Robin Thicke—called out by feminists across the globe for its lyrical illusions to rape culture—caused the rapper to reflect on his blind spots when it came to his own misogyny. In fact, it seems Williams was completely oblivious to the sexism in the music industry and in our culture in general. “I realized that we live in a chauvinist culture in our country. Hadn't realized that. Didn't realize that some of my songs catered to that. So that blew my mind,” he said. (Rape culture can be quite mind-blowing to me, too.)

Welch throws his interviewee a bone by questioning him on a sentiment he claims Williams repeats all the time: that it’s time for women to lead. Hmm? Sounds conveniently similar to the campaign slogan Williams is promoting. Williams responds by exclaiming how dope he thinks it would be to see a world where women held the highest positions across industries worldwide. Women are realizing the power within themselves. He believes he is a witness to this cultural shift. It is what must have compelled him to make femininity the focus of his project with Adidas. Welch fails to question the obvious here, so I will do it for him.

If Williams believes so strongly that women and femmes can lead and should lead in all major industries and companies, than why did he allow such a large company like Adidas to make him the face of this unisex collection, rather than giving the job to a prominent woman or femme person who actually represented the communities the brand is claiming to uplift? If women and femmes are so capable, then why were we only invited to the photo shoot and not to the board meeting? This is the naiveté at the core of Pharrell Williams.

It’s really easy to evolve past prejudice when you’re one of the most wealthy and famous humans living on the planet. This false spiritual enlightenment Williams and Welch are discussing amongst themselves is cringey at best. At its worst, it is misleading and miseducating an entire group of readers who otherwise missed out on an important lesson on gender and sexuality. We all have masculine and feminine energies existing within us. Gender is nothing more than a performance; it is what you make of it. Williams does not break down gender norms as much as he plays with them for his own personal enjoyment. I do not think he realizes the danger behind his ignorance, but that does not make his words any less harmful.

Trans people are not in a spiritual war with their own gender expression. They are at war with a patriarchal heteronormative society that violently governs their bodies. Women and femmes are not realizing their power for the first time now. They are finally being given opportunities to use their power and lead in industries they had previously been segregated from. And Pharrell Williams does not speak for us. We can speak for ourselves.

Though Williams came from humble beginnings, it is clear he has not made contact with Earth in quite some time—or, at least, not the version the rest of us are living in. Rather than come to terms with the harshness of prejudice people continue to experience daily, Williams would rather us all meet him on his five-star spaceship where there is no such thing as racism or sexism or homophobia. Just lots of customized Chanel sweaters and VVS diamond chains for all to enjoy freely without judgment. I hope one day Williams realizes this equality he desires can only be possible when corporate bodies like the ones he works for are no longer allowed to profit off the pain and persecution of marginalized people. But that might mean he would have to give up a few of his Céline bags. What’s it worth to you, Pharrell?