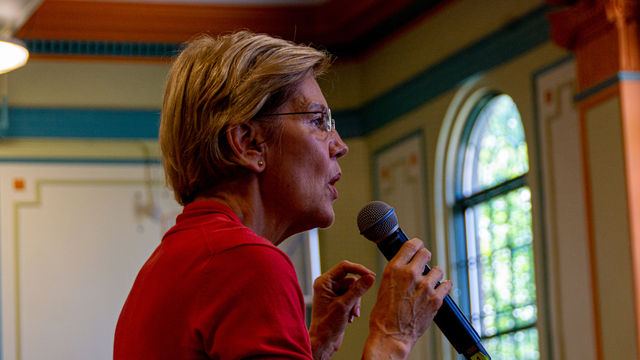 Despite showing some new faces (what’s good Tom Steyer?) and addressing some long-overlooked issues (aka reproductive rights), Tuesday night’s debate was more of the same. While the balance of power may have shifted, the same political divide between Progressives and Moderates defined the debate.

Previously, Joe Biden, occupying the role of the “electable” frontrunner, bore the brunt of the attacks from his fellow candidates, both substantial and silly. Who could forget ex-candidate Eric Swalwell's cries that Biden “pass the torch”? Or the sting of Kamala Harris calling out Biden for his stance on busing?

Now, Elizabeth Warren’s in the hot seat with candidates like Pete Buttigieg and Amy Klobuchar zeroing in on how she plans to pay for her ambitious Medicare For All plan and the feasibility of her progressive vision. “The difference between a plan and a pipe dream is something you can actually get done,” Klobuchar said.

Though these attacks may have been intended to weaken Warren, her status as the new chief target for her opponents is actually a sign of her strength. In Vanity Fair, Allison Durkee notes that multiple polls, including those from Quinnipiac and RealClearPolitics, measure Warren as either neck-in-neck with Biden or beating him by a slim margin. However, what’s likely worrying Warren’s competition isn’t the precarious lead she has at the moment, but the potential for that lead to expand. Durkee notes that “Warren is also notably the only candidate whose polling has steadily gone up throughout the primary.”

In the face of these attacks, Warren doubled down on her motto of “Dream big. Fight hard,” reiterating when others attacked her healthcare plan that “overall costs will go down” for middle-class families. Though opinions are split, many outlets, including The Root and The New York Times, reviewed her performance positively.

But Warren’s frontrunner status seems to signal more than just a simple rearranging of the status quo and, instead, herald a larger sea change in the debate between moderate and progressive approaches. Biden, the leading moderate, had what many considered a weak performance. He was criticized for his incoherence, the overly aggressive tone he took with Elizabeth Warren, and his erratic non-answer to a question about his son Hunter’s dealings in Ukraine.

Probably the most shocking is that Biden is also in more precarious financial straits than his more progressive opponents. After raising $15.2 million in the third quarter, Biden now only has just shy of $9 million. According to a tweet from Shane Goldmacher, a New York Times national political reporter, this amount is dwarfed by Warren and Sanders’ respective sums of $25.7 million and $33.7 million.

On top of this rumors are swirling that highly coveted endorsements will be headed Sanders’ way. Representatives Alexandria Ocasio-Cortez, Rashida Tlaib, and Ilhan Omar are expected to throw their support behind the Democratic socialist.

With momentum in the polls and in their finances, it’s clear that the big dreams and bold plans of progressives are resonating with a wider audience. The results of this momentum remain to be seen. However, it’s also clear that while their opponents may accuse progressives of dreaming too big, the American electorate is taking these candidates very, very seriously.

Tags: elizabeth warren , bernie sanders , joe biden , debate 2020 , politics , election
Support Feminist Media!
During these troubling political times, independent feminist media is more vital than ever. If our bold, uncensored reporting on women’s issues is important to you, please consider making a donation of $5, $25, $50, or whatever you can afford, to protect and sustain BUST.com.
Thanks so much—we can’t spell BUST without U.