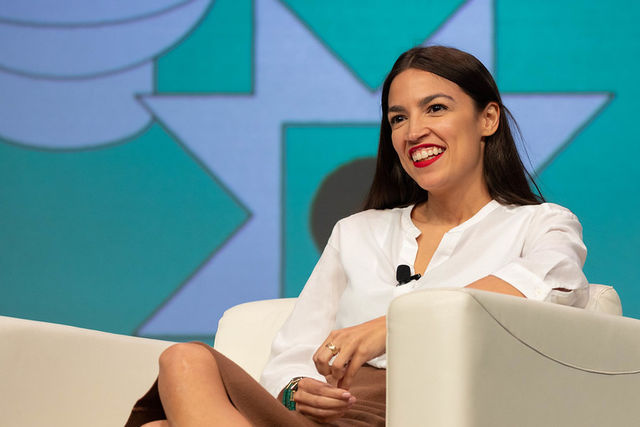 A conservative newspaper criticized the New York representative after she reportedly paid about $300 for a haircut and hair coloring. The Washington Times, which cited sources at the Last Tangle Salon in Washington, D.C., wrote that the Congresswoman “shelled out $80 for a haircut and $180 for lowlights,” plus an estimated 20 percent tip. The headline of its article read: “EXCLUSIVE: Self-declared socialist AOC splurges on high-dollar hairdo.”

“Rep. Alexandria Ocasio-Cortez has allowed life in Washington to go to her head – literally,” the newspaper wrote. “The self-declared socialist, who regularly rails against the rich and complains about the cost of living inside the Beltway [in Washington DC], spent nearly $300 on her hairdo at a pricey salon she frequents in downtown Washington.”

The article then went on to quote Richard Manning, president of Americans for Limited Government, who said: “She preaches socialism while living the life of the privileged,” adding that it’s “a bad look to spend hundreds of dollars to get your hair done to make a video decrying income inequality.” It also compared her haircut to former attorney general Jeff Sessions’s regular $20 cut at Senate Hair Care Services.

Since its publication on Wednesday, the story has been widely ridiculed online by many commentators, most of whom have collectively eye-rolled and pointed out the obvious sexist double standard for women—that this kind of article is never written about male public figures, many of whom often pay about the same price or more for their own personal grooming and appearance.

Conservatives won't be satisfied until @AOC is homeless, wearing only a wooden barrel with suspenders, and hitchhiking her way to Congress with her belonging strung up in a bindle. pic.twitter.com/jjzCqKnjVd

Does anyone actually realize how bonkers it is to be finger wagging at AOC for not getting a $20 haircut (also fuck you, no one at Supercuts is touching my hair) while actual BILLIONAIRES paid a lower tax rate than working class people last year? THIS ACTUALLY HAPPENED https://t.co/f4QryDVTSm

And as multiple news outlets and internet users have mentioned, $80 for a haircut and $180 for hair coloring is completely normal for the central Washington, D.C., area in which Ocasio-Cortez is located. In fact, Business Insider conducted its own survey of price lists for six nearby salons, showing that “the average cost across all six salons for the same cut and color Ocasio-Cortez reportedly asked for is $297.”

Also, given that public appearances are a part of her job, $300 for a hair appointment isn’t that much. As feminist author and columnist Jessica Valenti wrote on Twitter: “This is not an expensive haircut/color for a public figure who is frequently on TV.” Helaine Olen, an author and columnist for the Washington Post, also tweeted, adding that Ocasio-Cortez actually scored a good deal: “Leaving all other issues aside, $80 for a woman’s haircut is a bargain in NYC. What are people expecting #AOC to do? Go to a salon’s free hair model night?”

Many Twitter users have also noted that if she had never gotten the haircut, which she paid for with her own money, she would have eventually been criticized for maintaining an “unkempt” appearance.

1) this would obvs never be a story about a man

3) if her hair was raggedy, that would be the lead story instead

Leaving all other issues aside, $80 for a woman's haircut is a bargain in NYC. What are people expecting #AOC to do? Go to a salon's free hair model night? https://t.co/sFZEY3rBTR

In response to all the uproar about her hair, Ocasio-Cortez tweeted a story from Citizens for Ethics on Thursday, which cited State Department contracts showing that Vice-president Mike Pence recently used approximately $600,000 of taxpayers’ money to visit one of Trump’s golf courses in Ireland.

Won’t you look at that: Mike Pence used *taxpayer funds* - not personal ones - to spend several thousand haircuts’ worth of public money on a visit to Trump golf courses.

I wonder if Republicans care about corruption as much as they care about a woman’s cut & color. https://t.co/xBze4obZhv

40 million Americans live in poverty under today’s extreme inequality, yet the right-wing want you to blame Democratic socialism for their own moral failures.

Our policies, like Medicare for All, advance prosperity for working people.

The backlash over Ocasio-Cortez’s haircut clearly shows the conundrum or Catch-22 that women face, where they are either harshly attacked for spending an excessive amount of money to meet society’s strict beauty standards, or publicly shamed for failing to fulfill those beauty requirements.

“This game is rigged,” said Renee Engeln, author of Beauty Sick and a psychology professor at Northwestern University. “It was never set up to be fair, and I think the best thing we can do is, to the extent that it’s possible, just refuse to play. Women’s lives are not beauty pageants.”

Jaclyn Wong, a sociology professor who studies gender inequality at the University of South Carolina, also highlighted how the effort women put into their physical appearance is directly connected to their salary; she said that women who are “well-groomed” tend to earn more money than women who invest less in their appearance.

Wong says that when it comes to Ocasio-Cortez, “people who criticize her appearance often do so because they oppose her policies and perceive her as a threat.”

“It’s about making her [Ocasio-Cortez] feel uncomfortable,” she said, “for just being a person and doing what she needs to do in this position of power.”