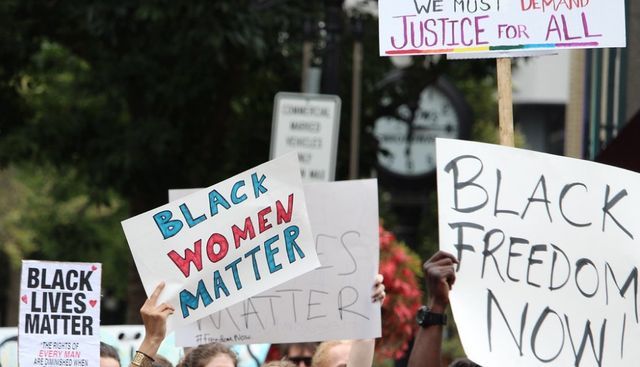 During Thursday’s CNN town hall, dedicated to issues concerning the LGBTQ community, protesters took center stage and called attention to the rampant violence against trans women of color, The New York Times reports. They first made their appearance as Pete Buttigieg, mayor of South Bend, Indiana and Democratic presidential candidate, began to answer a question. During this, they held up a transgender pride flag with the words “we are dying” written on it and demanded more awareness for violence against trans women of color. Some audience members took part in chanting “Trans lives matter.”

As @PeteButtigieg’s town hall begins, trans protesters hold flags and chant. He’s now addressing how diverse and challenged the LGBTQ community is and that it must be open to acceptance #EqualityTownHall pic.twitter.com/mcLr9zG9br

After security removed the protesters from the room, Buttigieg, the first openly gay presidential candidate, said, “I do want to acknowledge what these demonstrators were speaking about, which is the epidemic of violence against black trans women in this country right now.” He continued, “And I believe or would like to believe that everybody here is committed to ending that epidemic, and that does include lifting up its visibility and speaking to it.”

CNN moderator Anderson Cooper then mentioned, “There is a long and proud tradition in history in the gay and lesbian and transgender community of protest, and we applaud them for their protests. They are absolutely right to be angry and upset at the lack of attention particularly in the media.” According to the Human Rights Campaign, which co-sponsored the event with CNN, there have been at least 19 violent deaths of trans people this year alone. In 2018, there were at least 26, most of which were black trans women.

During former Rep. Beto O’Rourke’s allotted time, another activist approached the microphone. The woman, named Blossom C. Brown, took the mic and declared, “Our lives matter. I am an extraordinary black trans woman, and I deserve to be here.” She expressed frustration that a black trans person had yet to ask a question. “That’s how anti-blackness works. That’s how erasure works,” she stated. “CNN, you have erased black trans women for the last time.”

"Black trans women are being killed in this country."

Brown’s comments are especially revealing considering trans activist and commentator Ashlee Marie Preston was invited to ask a question but then, at the last minute, the network withdrew that opportunity. In an interview with Out, Preston explained she decided not to attend the forum altogether due to worries of being tokenized and that her presence could be used as a tactic to avoid criticisms about trans representation at the event, a trend she’s noticed as her work gains momentum. At the event, Preston wanted to “bring attention to the terror TSA inflicts on trans & non-binary bodies while traveling,” she tweeted, concluding, “I’d rather be absent than present & silent.”

I’m pulling out of the lgbtq presidential town hall tonight. I was part of the program & CNN scrapped my participation last minute. I was going to bring attention to the terror TSA inflicts on trans & non-binary bodies while traveling. I’d rather be absent than present & silent.

She told Out, “we get a call into a room for the appearance of being inclusive. We’re not leading the dialogue and having our specific issues examined closely. We have to settle for this sanitized version of what queer liberation looks like and it is an act of erasure.”