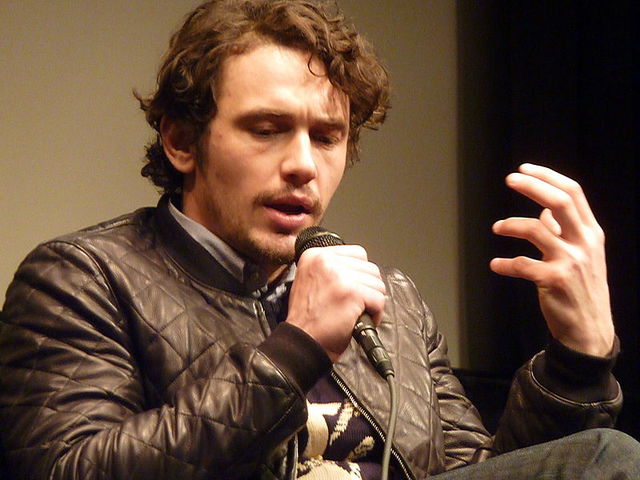 Two women are suing actor James Franco, his two business partners, and his production company Rabbit Bandini for allegedly sexually exploiting women who paid to take classes at his acting and filmmaking school, Studio 4. According to the New York Times, the two former students, Sarah Tither-Kaplan and Toni Gaal, filed a lawsuit on Thursday that alleges the men “engaged in widespread inappropriate and sexually charged behavior towards female students by sexualizing their power as a teacher and an employer by dangling the opportunity for roles in their projects.”

The two women say they paid hundreds of dollars to Studio 4 in exchange for the opportunity to receive acting coaching from its celebrity founder, Franco, and exclusively audition for roles in his independent films. Instead, “the roles never materialized,” the women said, and “their experience at the school was warped by sexual harassment.”

“The school instead created, fostered, and maintained a ‘boy’s club’ culture wherein female students were sent a very clear message that if they refused the advances of ‘instructors’ and ‘producers’ and/or refused to perform while partially nude, they would not be considered for substantial roles,” the lawsuit alleges.

In addition to paying about $300 in monthly tuition, students could pay up to $2,000 for additional “master classes.” According to the lawsuit, Franco oversaw one of those classes, a $750 Sex Scenes master class that, as the name suggests, focused on performing sex scenes. To audition, students were allegedly encouraged to perform and improvise various sex acts.

Both Tither-Kaplan and Gaal, the two female plaintiffs, auditioned for the sex scenes master class, hoping the class would reap some benefits by providing them with real opportunites. Gaal said she was rejected after she shared her concerns about how the auditions were being run, but Vice reports that Tither-Kaplan, one of the first students to take classes at Studio 4, said she was accepted into the class and started working with Franco.

Tither-Kaplan told the Los Angeles Times in 2018 that on the set of one production for the master class, Franco “simulated performing oral sex” on a handful of women and “removed the guards that protect actresses’ vaginas.” This allegation was corroborated by an unnamed woman who also spoke to the LA Times.

Franco opened Studio 4 in 2014 with Vince Jolivette, who is also named as a defendant in the lawsuit. His acting school held classes in New York and Los Angeles before it closed in October 2017. Based on the lawsuit, many of the independent films that Franco worked on there were never released; the women are now seeking unspecified damages and are requesting for audition recordings to be destroyed.

The Washington Post reports that the complaint also argues that Franco and his business partners used the school “to skirt California regulations that bar actors from paying for auditions.”

This isn’t the first time that the actor has been involved with controversy over his sexual past. Allegations of sexual misconduct against Franco date back to 2014, when the actor admitted on Live! With Kelly and Michael to hitting on a 17-year-old girl on Instagram; screenshots of their direct messages were made public, showing how Franco, then 35, tried to arrange a hotel hookup with the girl, whom he knew was underage. After the incident, he reportedly added an instruction to his Instagram bio, asking fans not to message him if they are younger than 18. The actor no longer has an Instagram account.

Then, in a 2018 Los Angeles Times story, five women, including Tither-Kaplan, shared detailed personal stories of what they said was Franco’s “pattern of inappropriate and abusive sexual behavior.” That same year, when the actor wore a Time’s Up pin as he walked on stage to collect a Golden Globe Award, Tither-Kaplan and many other women took to Twitter to vent their anger over his win and his “slap-in-the-face” support for Time’s Up, an initiative that was started to combat sexual misconduct in the entertainment industry.

Hey James Franco, nice #timesup pin at the #GoldenGlobes , remember a few weeks ago when you told me the full nudity you had me do in two of your movies for $100/day wasn't exploitative because I signed a contract to do it? Times up on that!

“I feel there was an abuse of power, and there was a culture of exploiting non-celebrity women, and a culture of women being replaceable,” Tither-Kaplan told the LA Times.

Franco’s lawyer denied all of those allegations in 2018. And in an interview with Late Show host Stephen Colbert that same year, the actor did the same, but said he’s “open to making amends where appropriate.”

“I have to do that to maintain my well being,” Franco told Colbert. “The things that I heard that were on Twitter are not accurate. But I completely support people coming out and being able to have a voice because they didn’t have a voice for so long. So I don’t want to shut them down in any way. If I have done something wrong, I will fix it. I have to.”

In a statement, Franco’s lawyer Michael Plonsker denied the new accusations and called the lawsuit “ill-informed.” His lawyer also stated that Franco will not only fully defend himself, but will also "seek damages from the plaintiffs and their attorneys for filing this scurrilous publicity-seeking lawsuit.”

Tither-Kaplan told the New York Times that she hasn’t been in contact with Franco for about two years, and that she felt she has seen no action or effort from the actor to live up to his promises.

“I can’t sleep at night knowing that my coming forward, originally, did not do the work that I wanted it to do yet,” Tither-Kaplan said. “There still has been no action, publicly, that shows me that these people know what they did is wrong and harmful and can’t be repeated.”

According to the Washington Post, Tither-Kaplan and Gaal say they plan to eventually include more than 100 former Studio 4 students in their lawsuit, and they allege that the school was established to “create a steady stream of young women to objectify and exploit.”

Time’s Up Calls For The Music Industry To #MuteRKelly: Link Roundup

Tags: James Franco , sexual exploitation , sexual misconduct , Time's Up , Hollywood , lawsuit , news , feminism
Support Feminist Media!
During these troubling political times, independent feminist media is more vital than ever. If our bold, uncensored reporting on women’s issues is important to you, please consider making a donation of $5, $25, $50, or whatever you can afford, to protect and sustain BUST.com.
Thanks so much—we can’t spell BUST without U.