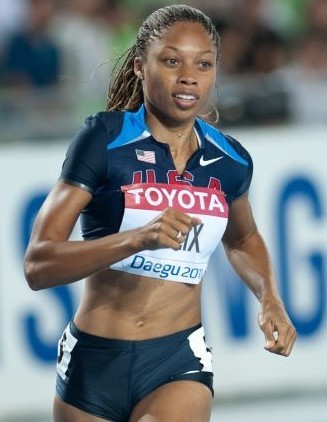 American track and field sprinter Allyson Felix was previously the only runner tied with Usain Bolt in holding the most medals – but Felix just broke that tie with her 12th gold medal, only 10 months after having given birth. Felix won the medal on September 29 at the 17th IAAF World Athletics Championships in Doha, Qatar in the mixed – gender 4x400 meters relay.

And it isn't only amazing that Felix just set a new world record for most gold medals and gave birth less than a year ago through an emergency C-section. What just might make Felix’s win all the more righteous is that she was going through intense sponsorship contract negotiations with Nike, who wouldn’t agree not to financially punish her if she wasn’t able to perform at her best after giving birth. In a New York Times op-ed, Felix wrote, “I’ve been one of Nike’s most widely marketed athletes. If I can’t secure maternity protections, who can? We shouldn’t have to rely on companies to do the right thing. Our families depend on it.” Ultimately, Felix made a victory for mothers in determining for herself what she could and couldn’t do, albeit the hard way – without being insured by any company.

Felix is now sponsored by Athleta, and is the brand's first sponsorship, according to its parent company Gap, Inc. And her story changed minds, too: after Felix’s Times piece, Nike changed its policy to ensure that female athletes will not be "adversely impacted financially for pregnancy."

Of the change in rule, Felix told People, “I think it’s just the power of the collective. The more voices that come together creates change. I felt like even though it was a little scary for me just to join the conversation and to have something to add, I think that there was power in those stories.”

Tags: Allyson Felix , Running , Feminism , Pregnancy
Support Feminist Media!
During these troubling political times, independent feminist media is more vital than ever. If our bold, uncensored reporting on women’s issues is important to you, please consider making a donation of $5, $25, $50, or whatever you can afford, to protect and sustain BUST.com.
Thanks so much—we can’t spell BUST without U.