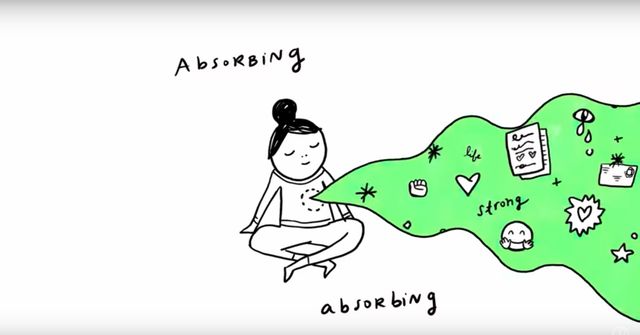 Last week, author and activist Chanel Miller released a short animated film about her experience after she was assaulted by Brock Turner, which she wrote, illustrated, and co-directed. Though the video highlights the emotional trauma of assault, it ends on a positive note, focusing on the network of support Miller found from total strangers after her victim impact statement went viral. “The world breathed life into my words,” she said, narrating the video. “I spent all this time absorbing, listening to their voices until I understood, Chanel knows how you get in blackouts. Chanel also knows how to write.”

This video is ultimately reflective of Chanel’s relationship with writing and art, which, in the darkest moments of her assault’s aftermath, became a tool for her to gain back her autonomy and sense of self. In the description of the video on Viking Books’ YouTube page, Chanel explained that art played an integral role in the process of writing her first book. “While writing Know My Name, I was constantly drawing as a way of letting my mind breathe, reminding myself that life is playful and imaginative,” she wrote.

‘Nobody wants to be defined by the worst thing that’s happened to them.’ — Chanel Miller opens up about her short film ‘I Am With You’ and how art helped her heal pic.twitter.com/ncAsWkf5vf

Speaking to Now This, Miller elaborated on her interest in art. She said: “When I draw I never have a plan. I completely let my mind at ease and I just continue to draw whatever I wish. I can be as playful as I want. I don’t have to be serious.” The video project was right in Miller’s wheelhouse since she’s earned her degree in literature and revealed in an interview with 60 Minutes that she has long dreamed of writing children’s books.

Miller also said that making the video proved to be a healing experience. She explained in her video’s description “The film crew that worked on this piece was almost all women. Feeling their support and creating together was immensely healing”.

header photo still from I Am With You short

The Woman Behind "Reviving Ophelia" Reflects On Teen Girls' Mental Health, Then & Now