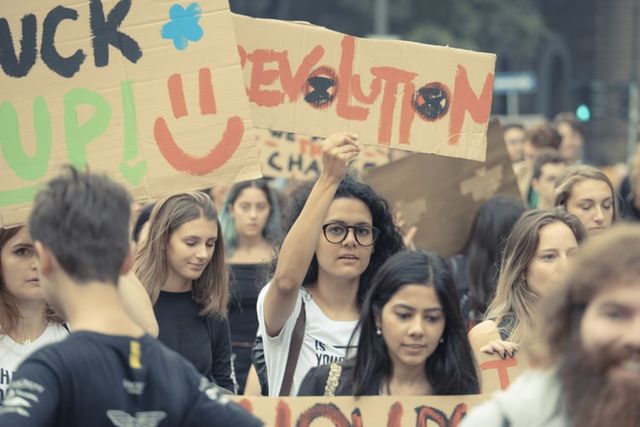 Throughout history, particularly in social justice movements, marginalized communities have lacked a space in which their voices are adequately validated and heard; both media outlets and the public often selectively elevate some (typically white) angry, determined voices, while leaving others (primarily Black and Brown voices) silenced and ignored.

In the current youth climate movement, there are a growing number of teens who are fighting to protect their lands from the tainted hands of capitalists and colonialists. The following activists are among the many girls and women of color who are bringing more diversity and representation into the ongoing fight against the climate crisis:

Isra Hirsi is the executive director and co-founder of the U.S. Youth Climate Strike, an American youth organization that’s striking for radical action (like the creation and implementation of the Green New Deal) to combat climate change. Daughter of U.S. Rep. Ilhan Omar, Hirsi’s activism highlights how the climate crisis disproportionately impacts marginalized communities across our nation and around the world. As a Black Muslim woman, she uses her voice and platform to call out environmental racism and to advocate for more intersectionality in the climate justice movement.

“People who look like me or are in low income communities don’t get to see their voices being heard in movements like these and I want to help change that,” Hirsi wrote on Twitter.

also!! this isn’t me being jealous. i even need to recognize my own privilege when it comes to my own organizing. i’m critiquing why media chooses a white organizer from a white dominated country to lead a movement that was created by black and brown people!

Helena Gualinga is an activist from the Ecuadorian Amazon who has been fighting for environmental justice since she was a little kid. She is known as a leader in her home of Sarayaku and is a part of the team who, in 2018, established the Kawsak Sacha, or the Living Forest Declaration, which “proposes a legal claim to the territorial rights and the nature for all the Native Peoples of the world.” She believes world leaders should help fight the climate crisis by stopping “the fossil-fuel industry and protect[ing] indigenous people in the Amazon, because those are the people who have been protecting the world's rainforest for a very long time now.”

She also works with Indigenous women and children in the Amazon by using her platform to “keep people informed of what's happening back in the Amazon” and “to be a voice for my people, what they have to say, from Ecuador.”

INDIGENOUS BLOOD, NOT A SINGLE DROP MORE! As we are facing one of the biggest crisis in human history, climate change. Indigenous people , protectors of the amazon and preventers of further climate destruction are criminalized, persecuted and murdered for defending LIFE and BASIC HUMAN RIGHTS. STAND WITH INDIGENOUS PEOPLE! Today we took over TIMES SQUARE. #climatejustice ?: @allison_hanes

Internationally known as a clean water advocate, Autumn Peltier began her activism at the age of 8 when she first learned that not all people in Canada have access to clean drinking water. Now the current Anishinabek Nation chief water commissioner (following in the footsteps of her late aunt), Peltier has spoken at more than 200 events; one event is the 2016 Assembly of First Nations gathering, where she told Prime Minister Justin Trudeau that “she was unhappy with his decisions regarding the development of pipelines in Canada.” Dubbed a “water warrior,” she continues to speak out for Indigenous people and was recently nominated for the 2019 International Children’s Peace Prize for her environmentalism.

“There are people living in third-world conditions in our first-world country,” she said. “I’m here to tell people about the importance of water, and to educate people on a cultural and spiritual level. They need to know that we need to act now.”

Bertine Lakjohn is a climate activist from the Marshall Islands and a former chairperson for the Ted-Ed Club at UWC ISAK Japan, an international boarding school where she studied as a high school student and gave a Ted-Ed Student Talk, called “Education should not limit your success,” in 2018. She has helped in the fight against the climate crisis by facilitating a youth leadership camp that’s “focused on why leadership is important in combating climate change.” She was recently accepted into the 2019 U.N. Youth Climate Summit, which is “a platform for young leaders who are driving climate action to showcase their solutions at the United Nations, and to meaningfully engage with decision-makers on the defining issue of our time.”

In an interview with Insider, Lakjohn suggested for other climate activists to educate those around them: “If you have a strong connection to environmental issues, I think you should be influencing others to take the same steps as you. Those that are uninformed, inform them; those that want to do more but don't know how, teach them.”

Anya Sastry is the Illinois state lead and national outreach director for the U.S. Youth Climate Strike. Through her role, she says she hopes to “bring this movement to communities that have not yet been included in this global fight for environmental justice and create more accessibility for communities that are marginalized and less privileged.” Similar to Isra Hirsi, Sastry is committed to intersectional advocacy. Along with environmental justice, for the past four years, she has been a changemaker for other social justice issues, such as gun violence prevention and women’s rights.

“When leaders start acting like children, children have to start acting like leaders,” Sastry said to the Island Press. “We shouldn’t have to do this, but I think our elected officials and people in power are not taking action on the issues that need to be solved...and I think that it’s so great that our generation is taking charge and really taking matters into our own hands.”

on September 20th, 2019, we made history. we saw all of the grassroots organizing and mobilizing we have been doing for months manifest into over 3 million people striking around the globe. welcome to a new era. #ClimateStrike #GenGND pic.twitter.com/l6p1ZHXH8W

Nadia Nazar is the co-founder, co-executive director, and art director of the youth-led climate organization Zero Hour, as well as an artist who uses her craft to bring awareness to environmental issues. An activist since she was 12, Nazar has led and participated in several climate strikes in Washington, D.C. She spoke at the U.N.’s 2018 International Day of the Girl summit about the impact of the climate crisis on girls, and she testified at the House Natural Resources’ hearing on climate change, urging elected officials to act on the environmental crisis.

“I feel like people don’t understand the big picture,” Nazar told Parentology. “Climate change is about so much more than the environment. It’s regards healthcare, access to clean air and water, immigration and mass migration, flooding and desertification — so many things. It magnifies all the problems we have today, and if we let it continue, it will exacerbate all the other problems we have in our society.

A year ago, I marched alongside so many passionate young climate activists in the pouring rain, demanding action to the climate crisis. It was just the beginning. @ThisIsZeroHour has come so far and we will continue to shake these systems that hold us captive. #thisiszerohour pic.twitter.com/PY3FIQiFWT

Xiye Bastida first realized the effects of climate change while living in her Mexican town of San Pedro Tultepec, where prolonged drought and flooding pervaded the land. Now in New York City, she is known as one of the strongest voices in the youth climate movement, along with Greta Thunberg. Bastida serves as a member of the administrative committee of the Peoples Climate Movement, the Sunrise Movement, and Extinction Rebellion, as well as a leader of the youth climate strike Fridays for Future, a campaign that grew out of Thunberg’s 2018 daily three-week vigil in front of the Swedish Parliament building, calling upon the government to take action against climate change.

“It’s too important,” she said to PBS. “In 10 years I’m going to be 27 and I want to be worrying about my career or how many children I’ll have — not worrying about where I’m going to live and whether I’ll be living in a place that will be flooded, or flattened by a hurricane.”

⁦@NexusMediaNews⁩ did an article on why I’m a climate activist. Thank you for uplifting my voice and that of millions of other youth! https://t.co/pDPQUHpKeM