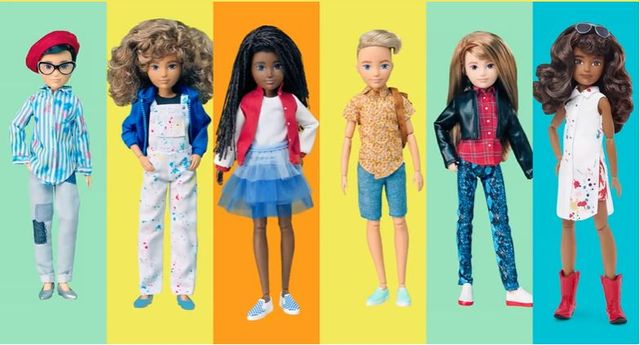 Toy company Mattel has announced the release of a new gender-inclusive doll line called Creatable World. According to CNN, this new line is all about customization; customers can create their own doll by selecting from an array of hairstyles, clothes, and accessories, thus creating a toy that is without labels and isn’t dictated by gender norms.

Mattel claimed in a statement that the idea for the line originated from the concerns both parents and children had about gendered toys. TIME reports that the toy company tested the gender-neutral doll with 250 families across seven states, including 15 children who identify as transgender, non-binary, or gender-fluid.

“There were a couple of gender-creative kids who told us that they dreaded Christmas Day because they knew whatever they got under the Christmas tree, it wasn’t made for them,” Monica Dreger, head of consumer insights at Mattel, said. “This is the first doll that you can find under the tree and see is for them because it can be for anyone.”

Despite the growing push for gender-neutral toys, some people already oppose the release of Creatable World and view it as a political statement; Mattel’s President Richard Dickson insists that the dolls aren’t intended as such. “We’re not in the business of politics, and we respect the decision any parent makes around how they raise their kids,” he said in an interview with TIME. “Our job is to stimulate imaginations. Our toys are ultimately canvases for cultural conversation, but it’s your conversation, not ours; your opinion, not ours.”

The new line, which will be sold exclusively online for about $30, consists of six different doll kits that each have one doll, two hairstyle options (one longer, one shorter), and varying clothes. The dolls’ faces don’t portray a particular gender—the lips aren’t plump, the eyelashes aren’t too long and fluttery, and the overall facial structure doesn’t appear too masculine or feminine. The dolls also come in a variety of skin tones.

Mattel, well-known for its production of hyper-feminine Barbies, is the first major toy company to create a gender-neutral doll line. Creatable World will now allow transgender and non-binary kids to see themselves in the things they play with.

“We see this line as an opportunity for us to open up that dialogue around what dolls are for and who dolls are for,” Culmone said. “And also as the world begins the celebrate the positive impact of inclusivity, we absolutely fundamentally believed it was time to launch a doll line free of labels and free of rules for kids.”

A ? without labels means everyone is invited to play. Welcome to #CreatableWorld, where we let toys be toys so kids can be kids. #AllWelcome

For anyone who needs clarification;

What this is not about: politics.
What this is about: kids playing with toys and expressing themselves however they feel comfortable.#CreatableWorld https://t.co/3ODmrkEgg9

So I woke up this morning to the news that @Mattel have launched a new line of dolls that are gender free and inclusive. I cannot wait to see these in store to help educate my children #creatableworld #allwelcome #inclusion #equality #LGBTQIA #welldonemattel pic.twitter.com/TvkL3K6aTZ

If you woke up today getting mad about children’s toys, then you should probably just go back to bed and try again tomorrow. #CreatableWorld

Saw this today on Twitter. Went to my local Mastermind toy store and got one. Nearly cried in the store. I am 54 years old. Remembering how as a child I always 'modified' my barbies to fit into my view of myself but the damn body shape always got in the way. #creatableworld #enby https://t.co/jxOIbj2b1G

Top photo is a screenshot from Mattel's Creatable World video

“Tiny Shoulders: Rethinking Barbie” Gives Mattel A Pat On The Back