A Museum Dedicated To Vaginas Is Opening in London 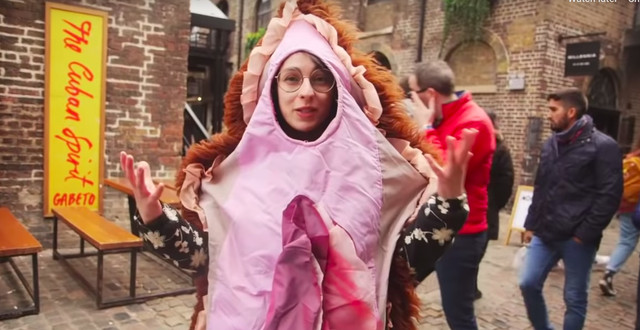 Gird your loins! A museum dedicated exclusively to vaginas is scheduled to open in London’s Camden Market this November.

Explaining their rationale for launching the museum, the founders wrote that “with a Vagina Museum, all people can learn that there is nothing shameful or offensive about vaginas and vulvas and by fighting stigma, we can be a part of helping solve these problems.”

The choice to educate others about vaginas, specifically through a physical museum, was also intentional. “Museums are used by societies to flag post what they deem important,” they wrote. “If we want the gynecological anatomy to be respected and loved, as a society, we need to make the statement that we value them.”

A promotional video shows representatives for the museum dressed as vulvas in Camden Market, and their interactions with market-goers seem to validate the intended purpose of their museum. When one rep approached a man and asked: “What am I?” He replied, “A pomegranate?”

BBC reports that the Museum Director Florence Schechter conceived of the idea to start the museum after she heard that there was a museum dedicated to penises in Iceland but none that gave vaginas the same attention. The museum’s website stated that it originated as several pop-ups and that while the Camden Market location will only be temporary, it will try to find a permanent location in the years to come.

The museum won’t just host exhibitions, but also workshops and film screenings on a variety of topics pertaining to health and sexuality. Inclusivity is integral to the museum’s philosophy. The resources in the museum will be open to everyone regardless of age, race or gender because even people who don’t have vaginas still need to know about them and, to quote Schechter, "not everyone who has a vagina is a woman, and not every woman has a vagina."

Putting these values into action, the museum will gear some of its programming toward children, helping cultivate a body-positive (and, specifically, a vagina-positive) mindset at an early age. The museum will also “work with doctors and medical professionals to offer services and support to trans and intersex people.”

The museum’s first exhibit will be Muff Busters: Vagina Myths and How To Fight Them and will open on Nov 16.

Photo taken as a screenshot from crowdfunding promotional video

A Sexologist's Guide To Muffing