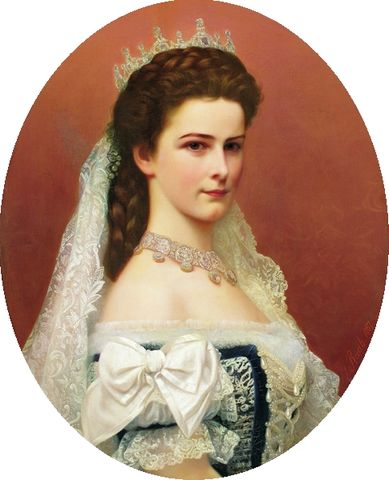 Born in Munich on December 24, 1837, Her Royal Highness Duchess Elisabeth Amalie Eugenie became Empress of Austria when she married Emperor Franz Joseph at the age of sixteen. Though now widely acknowledged as one of the most beautiful women of 19th century Europe, Sisi, as she was known to her intimates, was not considered a great beauty in her youth. Some biographers have even referred to her as sturdy and boyish with a “round peasant face.” Highly sensitive to any perceived deficiencies in her appearance, Sisi embarked on a lifetime of starvation diets and extreme beauty rituals which have since become the stuff of legend.

Sisi’s most recognizable attribute was, undoubtedly, her thick, chestnut hair which grew all the way down to her feet. According to biographer Brigitte Hamann:

“Elisabeth considered her hair her crowning glory. She was proud of nothing so much as the cascade that enveloped her like a cloak when it was loosened.”

The care and maintenance of these tremendous tresses required a time commitment of no less than three hours per day. Every morning, after a cold bath, massage, light breakfast, and rigorous exercise, Sisi sat down in a chair and submitted to the lengthy ministrations of her hairdresser, Fanny Feifalik. Sisi’s Greek tutor Konstantin Christomanos describes the ritual:

“Behind the Empress’s armchair stood the hairdresser…With her white hands she burrowed in the waves of hair, raised them and ran her fingertips over them as she might over velvet and silk, twisted them around her arms like rivers she wanted to capture because they did not want to run but to fly.” 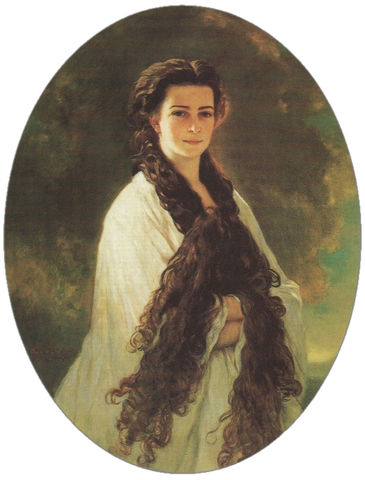 After combing out Sisi’s hair, braiding it, and twisting it up into elegant splendor on the crown of her head, Fanny was required to give account to her mistress of all the hairs that had broken or fallen out during the process. As Christomanos states:

To this end, Fanny employed various tricks to soothe the nerves of her mistress – and possibly to save herself from reproach.  Hamann explains:

“She cunningly secreted the combed-out hairs under her apron on a piece of adhesive tape – and could therefore often show the Empress a clean comb at the end of the day’s work.”

Soon, Sisi forbade anyone but Fanny from touching her hair, even going so far as to refuse to appear at official functions if Fanny was unavailable to style it. Fanny was made “imperial hairdresser,” a post which received a yearly salary of 2,000 guldens. This salary was considered to be extremely high, “corresponding roughly to that of a university professor.” Fanny’s services were greatly in demand and the braided coiffure that she created for the empress was repeatedly copied by women who wished to duplicate Sisi’s unique style. 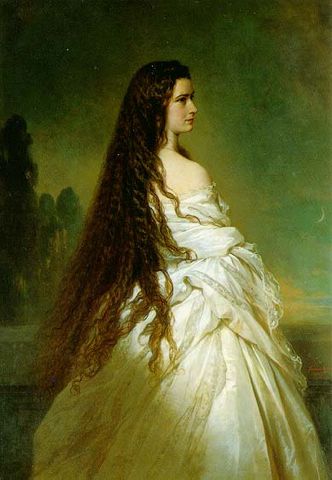 Sisi looked on her daily sessions of hairdressing as a “sacred ritual.” She used the morning hours that Fanny was combing and styling her hair for reading, writing letters, and for studying Greek and Hungarian with her tutors. But daily hairstyling was only one component of Sisi’s haircare regime. Every three weeks, her hair had to be washed and dried. This was a time consuming process in itself. In Ludwig Merkle’s biography of Sisi, he writes:

“Every three weeks it was washed with raw eggs and brandy, a procedure which took an entire day, including drying. After washing her hair, the Empress would don a long, waterproof silk dressing gown and walk up and down until her hair dried.”

The sheer weight of Sisi’s hair was sometimes too much for her. She occasionally suffered from headaches and, at their onset, would remain in her apartments with her hair held up with ribbons to take the weight from her head and allow the “air to circulate” through her tresses until the headache passed.  This was not the only hair-related trial to endure. Sisi was also subject to the whims of Fanny who knew very well that she was indispensable to her mistress and, if annoyed for any reason, did not hesitate to plead illness and send a substitute in her place. Sisi did not bear up well under such treatment. She is quoted as saying:

“After several such days of hairdressing, I am quite worn down. She knows that and waits for capitulation. I am a slave to my hair.” 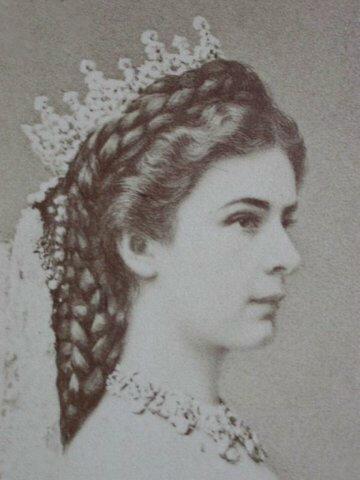 Photo of Empress Elisabeth of Austria by Emil Rabending, 1867.

Sisi’s skincare regimen, though not as time consuming as her haircare ritual, was no less involved. Obsessed with keeping wrinkles and other signs of aging at bay, Sisi applied crushed strawberries to her hands, neck, and face and, according to Merkle, she slept in “a sort of mask, lined inside with raw veal.” She soaked in warm olive oil baths to keep her skin soft and supple and, for everyday bathing, she used distilled water to wash with. She also made it a habit to sleep without any pillows, presumably on the advice of someone who “had once persuaded her that it would benefit her beauty.”

No less important than her skin and haircare ritual was Sisi’s diet and fitness regime. Throughout her life, she was fanatical about maintaining a slim figure. To this end, she wrapped herself in damp cloths above the hips to reduce inches and was constantly, and often unhealthily, dieting. Breakfast was usually quite minimal and some evening meals consisted of little more than a thin gravy. At other times, as Merkle writes:

“She would partake only of pressed extract of raw chicken, partridge, venison and beef; for weeks on end she would eat nothing but eggs, oranges, and raw milk.” 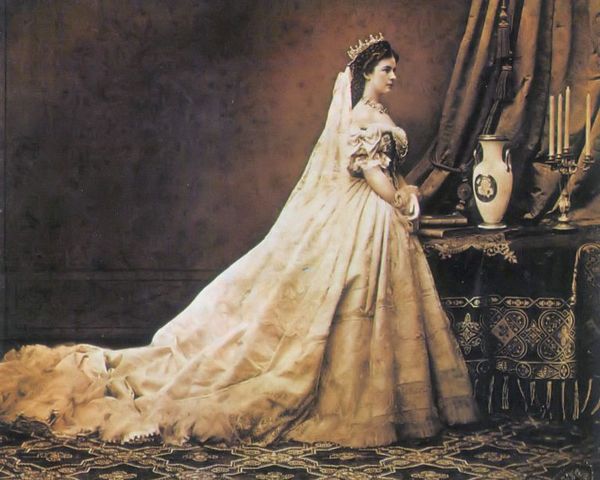 Photo of Empress Elisabeth of Austria by Emil Rabending, 1866.

Sisi offset her meager caloric intake with vast quantities of rigorous exercise and, as she aged, she only increased the physical demands upon her poorly nourished body.  Merkle explains that:

“When the first signs of aging appeared – wrinkles and weather-beaten skin caused by her diets and the time spent out of doors, and aching joints – Sisi was determined to hold on to her widely praised beauty by force. She tortured her slight body with hours of physical exercise — at the barre, at the rings, with dumbbells and weights of every description.”

According to Hamann, even Sisi’s several hour long afternoon walk was more in line with “a forced march at great speed over huge distances” than a leisurely stroll about the grounds.  However controversial, such drastic diet and exercise did have results.  As Hamann states:

“To the nineteenth century, which stamped even thirty-year-old women as matrons, especially when they had borne several children, Empress Elisabeth was an extraordinary phenomenon. For roughly thirty years – and unheard of length of time – the reputation of her beauty persisted.” 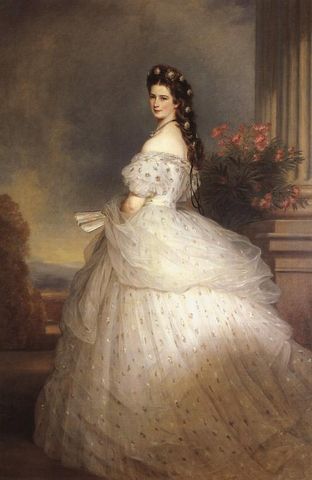 Empress Elisabeth of Austria with Diamond Stars on her Hair by Franz Xaver Winterhalter, 1864.

On September 10, 1898, while walking to the landing stage of a steamer ship in Geneva, Switzerland, the then 60-year-old Empress of Austria was stabbed through the heart with a thin, needle-like metal file by Italian anarchist Luigi Lucheni. Even in this, her vanity played a small part. Sisi was one of the 19th century’s famous “tight lacers” with a corset cinched to a mere 19.5 inches for the majority of her life.  After being stabbed, she fell to the ground, but amazingly was able to stand again and walk all the way to the landing bridge of the ship before becoming weak and, ultimately, fainting. She was carried to her cabin where her companions noticed a small spot of blood on her bodice. When Sisi failed to regain consciousness, she was carried off of the ship and to a nearby hotel where she died upon arrival.

It was at the hotel that her companions realized that she had been stabbed. Later, doctors would marvel that a woman who had been assaulted with a weapon that broke her fourth rib, pierced her lungs and pericardium, and penetrated her heart “from top to bottom, finally coming out from the lower part of the left ventricle” could have risen from where she fell and walked all the way to the steamer ship. Did her incredibly tight corset prevent her from bleeding to death at the scene? Some certainly think so. 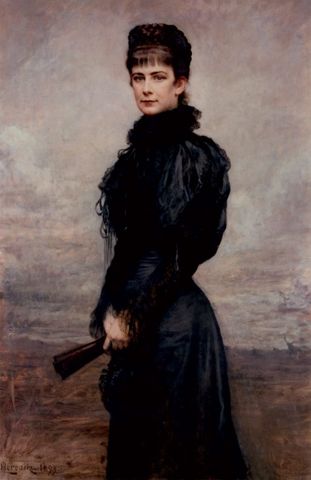 Posthumous Portrait of Empress Elisabeth of Austria by Leopold Horowitz, 1899.

The beauty rituals of the 19th century are a subject that I find endlessly fascinating. Nevertheless, whenever I read about Sisi, I feel a great deal of sadness for her. Yes, she was royalty.  And yes, she is still remembered as a great, 19th century beauty.  But her extreme diet, exercise, and beauty rituals took over her life. When so much emphasis is put on one’s outward appearance – on youth, beauty, and slimness – what does one have left when those attributes are gone? Having said that, I will close this article with one of my favorite quotes from Mary Wollstonecraft’s A Vindication of the Rights of Woman (1792):

“Taught from their infancy, that beauty is woman’s scepter, the mind shapes itself to the body, and, roaming round its gilt cage, only seeks to adorn its prison.” 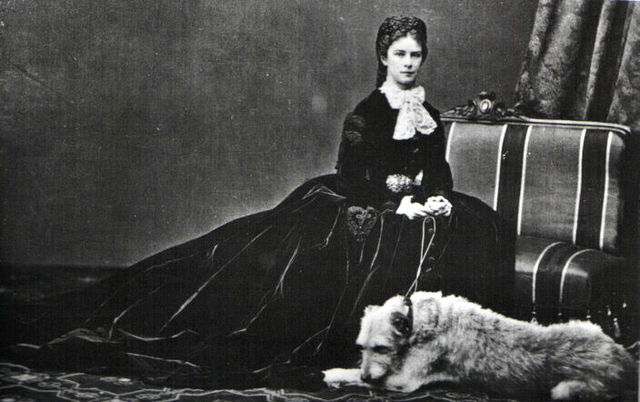 Photo of Empress Elisabeth of Austria with her dog, Shadow, by Emil Rabending, 1866.