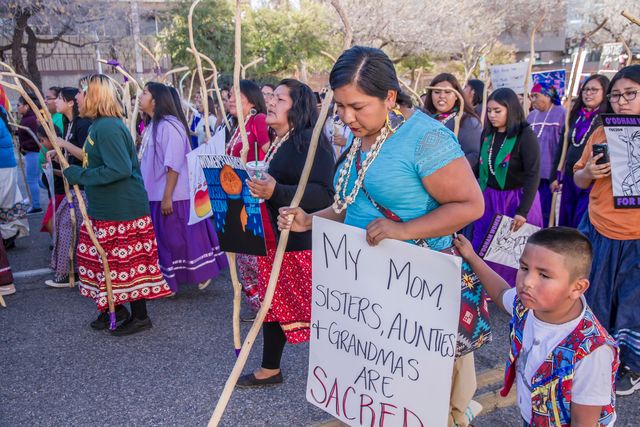 Women as a whole earn approximately 82 cents to every white man’s dollar. Black women are paid even less — about 67 percent of what white men are paid. But according to the National Women’s Law Center, Native American women who work full-time year-round typically earn only 58 cents for every dollar paid to their white, non-Hispanic male counterparts, which leads to a yearly loss of about $24,443 and a lifetime loss of almost $1 million. This means that Native women would have to work more than 21 months just to earn the same amount of money a white man makes in 12 months.

Some Native women receive even less than 58 cents; Tohono O'odham tribal women, for example, earn approximately 46.5 percent of what a white, non-Hispanic man does, according to research by the National Women’s Law Center. Additionally, the Native American women’s wage gap is significantly wider in certain states, with women in Delaware and California facing the largest wage gap by earning less than 50 cents on the dollar.

Native Women’s Equal Pay Day, which lands on Sept. 23 this year, marks the day when Native American women will have earned the same amount that their white male counterparts earned at the end of the previous year. It aims to spread awareness of not only the pay disparity, but also other disparities that these marginalized women disproportionately face, such as alarmingly high rates of chronic diseases, poverty, and gender-based violence.

The Indian Law Resource Center reports that more than four in five American Indian and Alaska Native women have experienced violence, and more than one in two have experienced sexual violence. These women also continue to endure the highest rate of sexual assault and are murdered at 10 times the national rate. Indigenous Americans born today have a shorter life expectancy than all other U.S. racial groups.

Many Native women struggle to provide their families with basic needs due to financial barriers. The fact that Native women earn only 58 cents on the dollar further exacerbates these ongoing issues and many others, including their lack of access to adequate healthcare, education, childcare, and other vital resources.

Native communities are often underrepresented and left out of important conversations in mainstream media, contributing to the long unaddressed crisis of missing and murdered Indigenous women. Some try to blame the wage disparity issue on a lack of educational attainment, but evidence shows that Native women “with Bachelor’s degrees, Master’s degrees, and professional degrees face larger gaps than those with high school diplomas.”

As the Anita Borg organization perfectly states: “Ultimately, this pay inequity is a reflection of the systemic oppression and erasure that Native Americans continue to face every day.”

Join the conversation and raise awareness by using #NativeWomensEqualPay and #DemandMore to support Native women in their fight for more equity in the workplace and American society.

Today is #NativeWomensEqualPay Day, the day when Native women’s pay catches up to what white, non-Hispanic men were paid in 2018.

Native women must work more than 21 months for what white men got in a year. We must #DemandMore. pic.twitter.com/nMyWubQkrG

Did you know Native women will lose $977,720 compared to white men? "Assuming they both begin work at age 20, this huge wage gap means a typical Native woman would have to work until she is nearly 90 years old to catch up." #NativeWomensEqualPay @nwlc https://t.co/05P6V1gfeF pic.twitter.com/BmRmqAn1c8

This Indigenous Woman Is Campaigning To Be The President Of Mexico