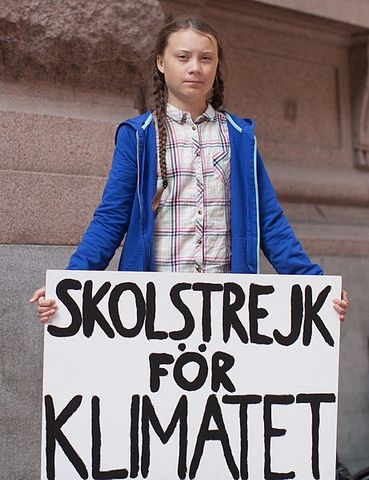 Last Friday marked the first of two historic climate strikes starting off the 2019 school year. It’s clear that the generations inheriting the climate crisis aren’t following the “earth day” or “don’t litter” approach, especially if the leaders are any indication. This movement is much bigger than any one person — after all, it’s a massive problem that needs large, structural reform — but Greta Thunberg, the Swedish teen climate activist, changes the game in a lot of ways. Thunberg’s already-significant legacy will not only include her global, grassroots response to the climate crisis, but the mainstream creation of a space for young women to be part of this new movement. Thunberg shows the world that young women aren’t just equipped to lead historically large and important movements, but that they are the ones most poised to do so. She is strong, unapologetic, and unstoppable in solving a problem created by apathy and greed.

Additionally, when it comes to facing the issue head-on, Thunberg has never shied away from the severity of the climate crisis. In an interview with CNN, she shared that at age 11 she struggled with depression due to climate anxiety. After seeing the Parkland School Walkout in 2018, Thunberg channeled her own power into protesting outside Swedish Parliament every Friday during the school day to demand they meet the emissions standards set by the Paris Climate Accord. Last week, she led teenagers everywhere in the same mission. She not only organized the strike movement, which happened in all corners of the world, but she spoke at the New York City strike after marching alongside the other students. Thunberg has also been the speaker of her own TED Talk and spoken to U.S. Senate, British Parliament, UN Climate Change COP24 Conference, and the World Economic Forum, and on these occasions, Thunberg hasn't refrained from calling out world leaders, holding them responsible for the current problem at hand. Recently, appearing at the US Senate Climate Task Force, Thunberg even pushed back against the praise she was receiving and told the senate, instead, to "try harder."

I'm so happy to see that young women around the world are leading the climate movement. Thank you to girls like @GretaThunberg for using your voice, speaking truth to power — and encouraging other young people to do the same. ? https://t.co/e489ZiUHul

While the environmental movement has had an important legacy of female leaders like Rachel Carson, Jane Goodall, and Wangari Maathai, Thunberg is redefining modern-day environmentalism that reflects the power of women, specifically teen girls. And it isn't just her: other powerhouses including 17-year-old Helena Gualinga are at the forefront of the movement. Thunberg as a figure herself breaks down the notions of hierarchies which exist even in progressive movements, and a large part of what makes Thunberg’s activism so powerful is that she has consistently prioritized the pressure of the issue over traditional obstacles that might’ve held her back from action.

Furthermore, for environmentalism to move forward in a way which lifts everyone, gender has to be part of the conversation and having female leaders of the movement inspires a more intersectional agenda to save the planet: this is especially important in a world where women are more vulnerable to the effects of climate change. And also importantly, Thunberg’s activism questions stereotypes: she's passionate and caring, but careful with her words and constantly focused on the facts of the issues. She isn't afraid to directly respond to condescension. And though Thunberg is a force and has now been positioned as a leader—and her actions and words have challenged anyone who dares not to take teen girls seriously—she won’t stop reminding world leaders that, ultimately, they’re the ones responsible.

“We will not let you get away with this,” she said at the U.N. Climate Action Summit. “The world is waking up. And change is coming, whether you like it or not.”

12 Vendors To Shop At Zero Waste

Zero Waste Talks: Laura Rosenshine Talks Trash And How You Can Compost In NYC