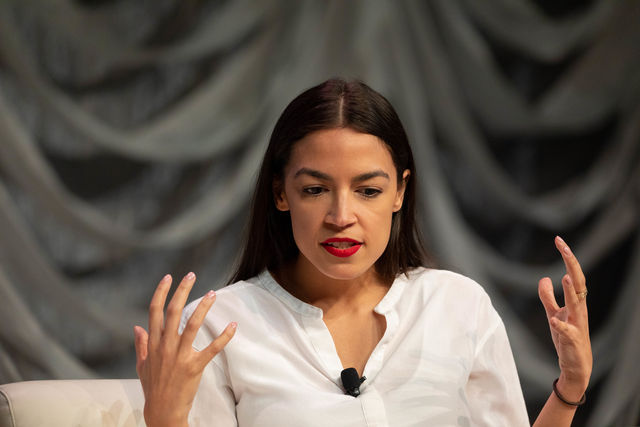 An advertisement showing a burning image of Alexandria Ocasio-Cortez aired during last night’s Democratic debate and has sparked instant criticism of ABC from both the public and the N.Y. representative herself. The 30-second release is from the New Faces GOP PAC, led by former congressional candidate Elizabeth Heng.

The ad, which ran on at least one Sinclair-owned ABC affiliate in Washington D.C., opens with an image of Ocasio-Cortez, whom Heng calls “the face of socialism and ignorance.” The picture then burns away to reveal disturbing graphics from the 1970s Cambodian Civil War.

“Does Alexandria Ocasio-Cortez know the horrors of socialism?” Heng continues. “My father was minutes from death in Cambodia before a forced marriage saved his life. That’s socialism: Forced obedience. Starvation. Mine is a face of freedom. My skin is not white. I’m not outrageous, racist, nor socialist. I’m a Republican.”

Many viewers took to Twitter to voice their opinions and concerns about the incident; Ocasio-Cortez was one of them. She immediately responded to the unsettling political ad last night, writing in her first tweet: “Republicans are running TV ads setting pictures of me on fire to convince people they aren’t racist. Life is weird!”

Heng shot back at AOC, saying: “Are you really calling me a racist? I’m calling all Democrats out for supporting an evil ideology. Or are you just in Congress to hang out with celebrities and tweet out ridiculous ideas like the green new deal?” Heng also tweeted earlier this morning, claiming that Ocasio-Cortez’s overall response to the ad is “the Democratic party in a nutshell,” and that she “doesn’t care about @AOC feelings - I care about stopping her lies about the lies of socialism.”

But Ocasio-Cortez wasn’t having it. The young New York lawmaker continued on Twitter by calling the PAC release “a love letter to the GOP’s white supremacist case.”

Know that this wasn’t an ad for young conservatives of color - that was the pretense.

What you just watched was a love letter to the GOP’s white supremacist case. https://t.co/zvp1EB02c5

The first question that came to many viewers' minds was: How could ABC allow this to run? After the ad aired, #BoycottABC began trending as people questioned and called out the network. Several asserted that the fact that the ad ran just shows the violence ingrained in the GOP, and how media company giants (like Sinclair) amplify and profit from it. Others drew comparisons to instances where the network refused to air other supposedly controversial videos, yet somehow allowed Heng’s propaganda a pass.

Rep. Ilhan Omar has also weighed in on the PAC ad, tweeting earlier this morning that ABC representatives “need to pull this garbage off the air and issue an apology to @AOC.”

This is horrifying to watch.

When will the Republicans learn how to offer ideas and solutions without stroking fear and inciting violence?

Enough is enough. They need to pull this garbage off the air and issue an apology to @AOC. https://t.co/pxSW0iUgSR

This isn’t the first time Ocasio-Cortez has been targeted by a Republican. She, along with Omar and Reps. Ayanna Pressley and Rashida Tlaib, is a member of a group of progressive Democratic congresswomen informally dubbed “The Squad,” which has been attacked multiple times this year by President Trump and other Republicans, but has continued to speak out against the party and its twisted tactics.

It’s getting old to say ‘this is a new low’ but here we are. A televised death threat against a member of Congress paid for by a Republican SuperPac. Congresswoman @AOC is undeterred but this is dangerous and reckless.

Candidates were warned not to swear during this debate, but an ad that clearly incites animosity and violence toward a sitting Congresswoman was apparently no issue. Media corporations are responsible for how they choose to profit, period. #DemDebate https://t.co/5M65jOpizs

Ilhan Omar and Rashida Tlaib Are Holding Their Ground