There's A Reason Why All Eyes Are On Coco Gauff 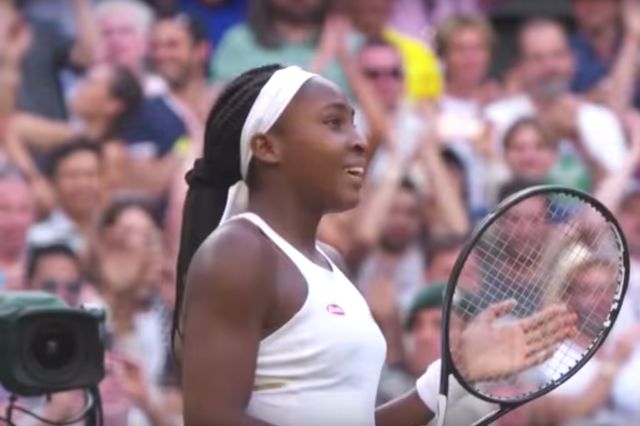 Stands overflow for Coco Gauff. Tennis fans get on their feet for standing ovations. And the excitement’s so palpable it even has a name now: Cocomania.

Gauff is the player to watch for good reason—she’s wildly talented. At 15, she’s one of the sport’s youngest athletes and yet her serve outstrips many of her competitors', whipping over the net at a peak 118 mph. Gauff’s equally famous for her movement. She can cover the court in just a few paces, saving time and energy—and giving her the edge over players who take more steps to cut across the same distance. Her comeback win over Polona Hercog at Wimbledon stunned viewers across the globe, and her sweeping defeat of Timea Babos made her the youngest woman to reach Round 3 of the US Open since Anna Kournikova in ‘96.

The tennis phenom was also the youngest person to compete in the U.S. Open this year. But she lost in singles to Naomi Osaka, the number one player in the world. And after a defeat with her doubles partner Caty McNally (the pair’s been dubbed McCoco by fans), Gauff’s time at the 2019 US Open ended.

That said, it’s clear that this is the beginning of Gauff’s career, and if this year’s Open performance is any indication, it’s also obvious that Gauff’s quickly becoming a player to beat.

And on top of everything, Gauff’s one of the best-loved players in the industry. Those ecstatic crowds show up for Gauff in huge numbers not only because of her talent but also because of her character. Most recently, Gauff was recognized for her sportsmanship after a difficult loss to Osaka. In a memorable post-match moment, she said, “For me, the definition of an athlete is someone who on the court treats you like your worst enemy but off the court can be your best friend. I think that’s what [Osaka] did tonight.”

Let's be honest here, tennis has a fraught relationship to the notion of poise. Claims of improper etiquette are often used to discredit how players (especially black women) react to unfairness on the court, as in the case of Serena Williams. Accusations of “losing composure” are weaponized over and over against players of color, and yet they never seem to come up when someone like Novak Djokovic throws his racket or yells at the umpire.

But this exchange between Gauff and Osaka mirrors the solidarity we witnessed between Serena Williams and Osaka. Then only 20, Osaka beat Williams at last year’s Grand Slam final, but the match’s controversy overshadowed her success. Serena Williams wrote about her own experiences with media scrutiny, and she reached out to Osaka to apologize for the way they'd been pitted against each other: “I would never, ever want the light to shine away from another female, specifically another black female athlete. I can’t wait for your future, and believe me I will always be watching as a big fan!”

Similarly, Osaka kept the bigger picture in mind after her victory this week. She met the camera's gaze and said, “I know that you guys are kind of coming at her with love, too, but I feel like the amount of media on her right now is kind of insane for her age. I just want her to take care of herself.”

Why Do Men Feel So Threatened by Female Athletes?