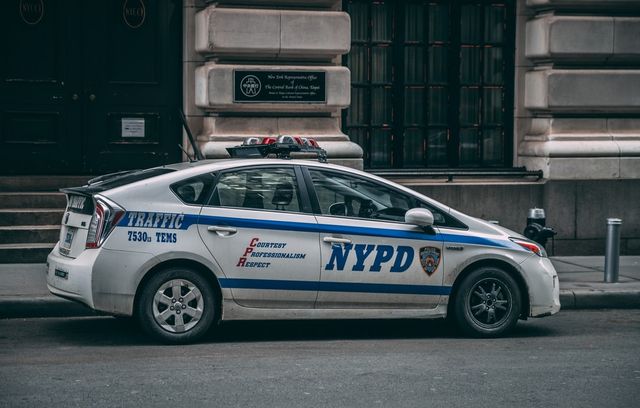 In the final chapter of a story BUST has been tracking since its first reports, two former Brooklyn detectives accused of raping an 18-year-old girl in 2017 will serve no jail time. Pleading guilty to official misconduct and bribery, the sum total punishment for the disgraced cops is five years’ probation.

Two years ago, Anna — whose last name is redacted in court documents to preserve anonymity, but who identifies online as Anna Chambers — was driving with friends in a Brooklyn parking lot when two plainclothes cops pulled them over and approached the car. They spotted weed in a cup holder and ordered the teens to get out of the car. Anna’s friends, both of whom were men, were allowed to leave while Anna was handcuffed and tossed into the back of an unmarked police vehicle.

They were supposed to drive her to the nearby police station. Instead, Anna claims, Detectives Richard Hall and Eddie Martin took turns raping the crying, objecting, and still handcuffed teenager for 45 minutes before dumping her on the side of the road a quarter mile from the police station.

A rape kit revealed DNA evidence from both officers in the semen found on Anna’s body. In what she assumed would be a cut-and-dry case, Anna filed a lawsuit against the two officers despite police intimidation to remain silent. She also took legal action against the city of New York, suing for $50 million in damages.

Rape, bribery, kidnapping, and official misconduct charges, which could get the officers up to 25 years in prison each, were officially filed against the detectives by the Brooklyn District Attorney’s Office a month after the incident.

While the detectives, both of whom are in their thirties, resigned from the force and admitted to having sex with Anna, they maintained that the sex was consensual.

Claims that sex between an arrested 18-year-old girl (who comes in at little more than 5 feet tall) and two officers (each towering at over six feet tall) could be consensual seems laughable, and given the power disparity between the parties, sexual activity has no chance of being uncoerced—or, at least, that's what legislators in 35 states thought.

New York was not one of those states.

“The case exposed a gaping loophole in New York law—,” according to The Guardian, “which said it was third-degree rape for a correction or parole officer to have sex with a person in custody, but did not apply the same standard to police officers.” The most an officer could be charged with for sex with an arrested person is "official misconduct," according to Buzzfeeed News, punishable by a maximum of one year in jail.

Anna’s case, which quickly drew national attention with front page stories, rallies on her behalf, and an increasingly popular social media presence, catapulted this legal oversight into the limelight, prompting City Council Member Mark Treyger to introduce legislation classifying sex between a police officer and a person in custody as rape in the third degree.

Though the law was passed in 2018, however, Anna herself is not one of the survivors to benefit. Despite the events of that night now being legally classified as rape regardless of the officers' "consent" defense, Brooklyn DA Eric Gonzales dropped the charges against the officers last march.

According to The Guardian, DA spokesman Oren Yaniv stated:

“We believe – as the newly created statute recognizes - that any sexual conduct between police officers and a person in their custody should constitute a crime. However, that was not the law at the time of the incident,” The Guardian reported, “Because of this and because of unforeseen and serious credibility issues that arose over the past year and our ethical obligations under the rules of professional conduct, we are precluded from proceeding with the rape charges.”

Yesterday, the former detectives (one of whom was involved in a similar lawsuit that was recently settled for $20,000) got off on bribery—telling Anna that she would avoid arrest in exchange for sex—and official misconduct. Anna’s lawyer, Michael David, will be building a case for a federal civil rights investigation following the outcome of the case, as reported by Politico.

“It’s sending the worst message to victims of police sexual misconduct in America,” David said, “that police could kidnap someone, rape her, and throw her on the street, and get away with it.”

This Teenage Girl Says Two Police Officers Handcuffed Her, Then Raped Her

Tags: Rape , sexual assault , cops , detectives , NYPD , kidnapping , court case , plea bargain , teenager , NYPD , Brooklyn
Support Feminist Media!
During these troubling political times, independent feminist media is more vital than ever. If our bold, uncensored reporting on women’s issues is important to you, please consider making a donation of $5, $25, $50, or whatever you can afford, to protect and sustain BUST.com.
Thanks so much—we can’t spell BUST without U.