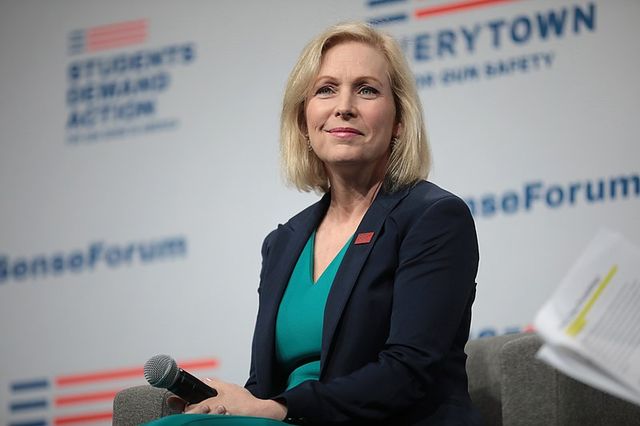 With so many Democratic primary candidates, it's been hard to stand out, but Kirsten Gillibrand never failed to do just that, and has used her platform to unabashedly fight for women. But yesterday, the New York Senator and women’s rights activist announced that she had ended her campaign for presidency in 2020.

In a video shared via Twitter, Gillibrand announced that after 8 months and two debate performances fighting to be the Democratic nominee for president, she decided she could better serve her country outside the race. The video included clips from Gillibrand’s rallies and town halls, and touching moments of her with young girls and campaign staffers. Gillibrand made history by being part of a record amount of women running for president, but Gillibrand took feminism farther than just numbers in this race: she centered women in her campaign, taking an unprecedented approach to becoming the president of the United States.

Al Franken faced eight credible allegations of sexual harassment. 34 other Senators called for his resignation, but now I seem to stand alone.

I don't mind. We will not beat Trump if we don't have courage and clarity on this. Others may regret standing with women. I never will. pic.twitter.com/ylU6NLWdsf

What was special about Gillibrand's campaign is that she didn’t just isolate women’s issues outside the conversation, but found a way to integrate them, forcing the conversation to make room for the consideration of gender inequality. Central to her campaign were her policies around enabling women to have easier access to the workforce and healthcare. Gillibrand fought for a lot when it came to the primary, pledging her support for 12 weeks of paid family leave, codifying Roe V. Wade into law, protecting Title X and Medicare for All, and fixing the wage gap. And when pressed on her commitment to being a champion for survivors of sexual assault, Gillibrand did not back down. Gillibrand has continually spoken out as an advocate of the #MeToo movement, standing her ground when it came to the controversial push for Al Franken’s resignation and even revisiting the Democratic Party's past, saying Bill Clinton should have stepped down after his affair with Monica Lewinsky. Furthermore, Gillibrand also championed issues of race, LGBTQ+ rights, gun safety, and the environment. In the words of a very wise tweet, “I’m exhausted on behalf of Kirsten Gillibrand.”

While Gillibrand’s campaign might be remembered in part for its lack of ability to garner buzz, there are moments from the past 8 months which we would all be worse off forgetting. From pushing Joe Biden on his past record of voting against women to explaining white privilege to a woman in Ohio in a way that was honest and bold, she was articulate and upbeat, with experience and bravery leading her campaign. That's what makes it hard to see Gillibrand go as part of the first round of dropouts: especially considering how her name recognition separates her from other people leaving the race, such as John Hickenlooper and Seth Moulton.

My friend @SenGillibrand is a brave voice on some of the most critical issues facing our country today — from childcare to sexual assault. She is a champion and I know she’s not done fighting for women and families everywhere.

The comfort in Gillibrand leaving is that she promises to continue to fight for the Democratic Party and for electing women, and it’s hard not to believe her. Gillibrand promises not only to support whoever becomes the nominee, but to continue to fight for electing women "up and down the ballot." Moreover, she leaves the race with five more women, three of them qualifying for the debate, showing a real chance of the U.S. gaining a female president.

Happy 243rd birthday, America! Seems like a great time to send a woman to the White House.

Primaries, at their very best, allow political parties to work out the rumblings within the establishment over contentious issues, with this year drawing special attention to differences in immigration and healthcare. The hope is that the candidates experienced with and passionate about certain issues will push each other on said topics — we saw Julian Castro do this with immigration, and Elizabeth Warren and Bernie Sanders with healthcare. While Gillibrand might not have been the one to snag the nomination, she would’ve still been there to push the male-dominated conversation back to women’s rights, and ask everyone to think about the way women’s voices are often left behind in politics. Amid a time when women’s reproductive rights are under attack, the wage gap persists, maternal mortality rates increase, and a sexual predator is in the White House, women could use all the voice up on that stage they could get. And a voice for women she was.

Tags: feminism , politics , 2020
Support Feminist Media!
During these troubling political times, independent feminist media is more vital than ever. If our bold, uncensored reporting on women’s issues is important to you, please consider making a donation of $5, $25, $50, or whatever you can afford, to protect and sustain BUST.com.
Thanks so much—we can’t spell BUST without U.